Node-webgl. WebGL bindings for node This is a Node.JS port of WebGL for desktops: windows, linux, mac It started as an extension of creationix/node-webgl and their great example com.creationix.minimason that you can find in examples/wavefront.js. 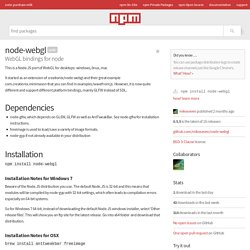 However, it is now quite different and support different platform bindings, mainly GLFW instead of SDL. node-glfw, which depends on GLEW, GLFW as well as AntTweakBar. Mocha - the fun, simple, flexible JavaScript test framework. Sinon.JS - Documentation. Home - Chai. How to style the HTML 5 Video element with JavaScript and CSS. Introduction Html 5 brings to life the new element which we’ll allow you to insert a native HTML video player in your web page. 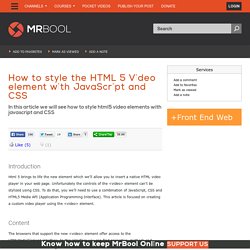 Unfortunately the controls of the <video> element can’t be stylized using CSS. To do that, you we’ll need to use a combination of JavaScript, CSS and HTML5 Media API (Application Programming Interface). This article is focused on creating a custom video player using the <video> element. Content The browsers that support the new <video> element offer access to the HTMLMediaElement interface. The methods located in HTMLMediaElement interface are: canPlayType(string) - this method checks if the current browser can play the media type specified through the string parameter (container and codec). load() - this method loads your media pause() - this method pause the media play play() - this method plays your media The canPlayType method has as parameter a string which contains the type of media container, the type of video codec and the type of audio codec. Conclusion. In Introduction to HTTP Basics. Introduction The WEB Internet (or The Web) is a massive distributed client/server information system as depicted in the following diagram. 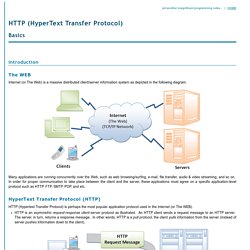 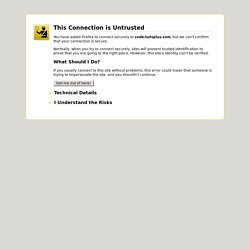 It's a stateless, application-layer protocol for communicating between distributed systems, and is the foundation of the modern web. As a web developer, we all must have a strong understanding of this protocol. Let's review this powerful protocol through the lens of a web developer. We'll tackle the topic in two parts.

In this first entry, we'll cover the basics and outline the various request and response headers. Although I'll mention some details related to headers, it's best to instead consult the RFC (RFC 2616) for in-depth coverage. HTTP allows for communication between a variety of hosts and clients, and supports a mixture of network configurations. To make this possible, it assumes very little about a particular system, and does not keep state between different message exchanges. 20 Node.js projects that you should know about to increase productivity. Node.js continues to grow through a very active community. 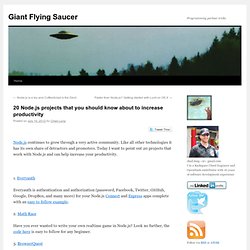 Like all other technologies it has its own share of detractors and promoters. Today I want to point out 20 projects that work with Node.js and can help increase your productivity. Code4node. Nodejs Restify MongoDB - REST API. Nodejs Restify MongoDB tutorial Restify GET PUT DELETE POST MongoDB Mongojs MongoLab Runnable Demo In this post, we are going build a Node based REST API for a collection in our application. 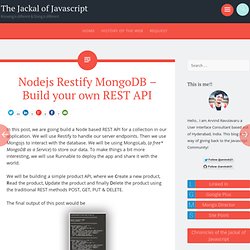 We will use Restify to handle our server endpoints. Day 14–The UIWebView. Welcome to Day 14 in the 31 Days of iOS. 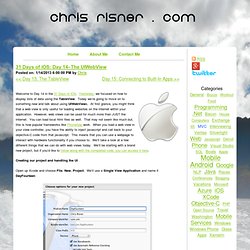 Yesterday, we focused on how to display lists of data using the TableView. Today we’re going to move on to something new and talk about using UIWebViews. At first glance, you might think that a web view is only useful for loading websites on the internet within your application. However, web views can be used for much more than JUST the internet. You can load local html files as well. Creating our project and handling the UI Open up Xcode and choose File, New, Project. 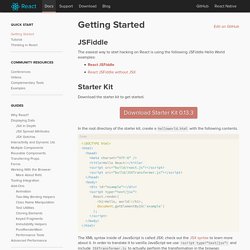 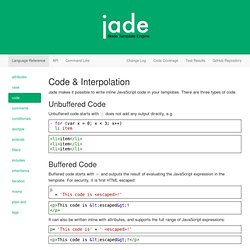 There are three types of code. Unbuffered Code Unbuffered code starts with - does not add any output directly, e.g. Buffered Code. How to get data from MongoDB into Node.js. So you’ve got a Node.js website, and created a MongoDB database - the big question – how do you connect the two? 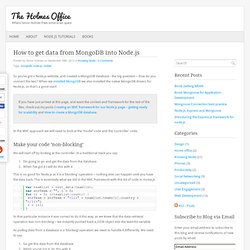 When we installed MongoDB we also installed the native MongoDB drivers for Node.js, so that’s a good start! If you have just arrived at this page, and want the context and framework for the rest of the files, check out my posts Creating an MVC framework for our Node.js page – getting ready for scalability and How to create a MongoDB database In the MVC approach we will need to look at the ‘model’ code and the ‘controller’ code. Make your code ‘non-blocking’ We will start off by looking at the controller.

I’m going to go and get the data from the databaseWhen I’ve got it I will do this with it. Query for records in MongoDB using MongoDB Native for Node.js Code Example. Getting Started. Tutorial - Getting Started With Node.js, Express, MongoDB. Installing Node, NPM and Express on Mac OSX - Dan Dean. Apr 01, 2011 Prerequisites You need to have Git installed. 31 Days of iOS: Day 14–The UIWebView. Node.js. Mongoskin Tutorial with Examples. Mongoskin is probably the most developer-friendly MongoDB driver for Node.js at the moment - it is asynchronous and has a clean looking structure.

But its docs are not that developer-friendly (the effort is much appreciated though) - no good examples or explanation; probably because English isn't the author's first language. After realizing that the Mongoskin docs may take a long time to improve, I decided to personally address the issue by writing a Mongoskin tutorial for all those who are looking for an easy way to integrate MongoDB with Node.js. This is going to be a beginner's tutorial which will guide you through the basics of Mongoskin and should be enough for all basic Node.js-MongoDB interaction.