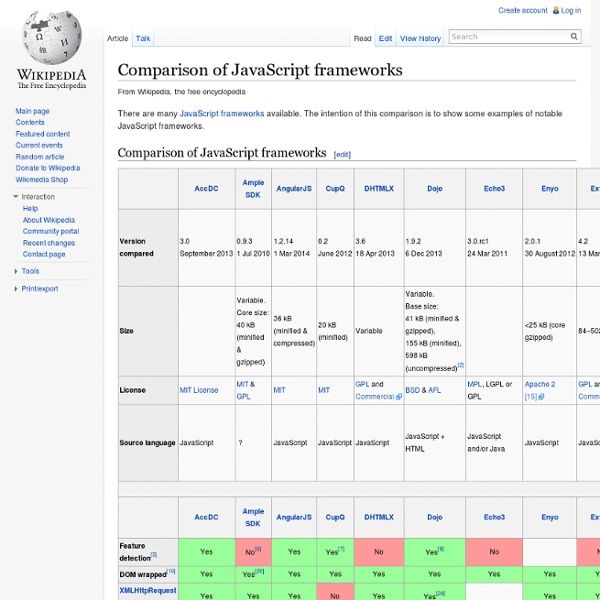 Microjs: Fantastic Micro-Frameworks and Micro-Libraries for Fun and Profit! jQuery jQuery is a cross-platform JavaScript library designed to simplify the client-side scripting of HTML.[2] It was released in January 2006 at BarCamp NYC by John Resig. It is currently developed by a team of developers led by Dave Methvin. Used by over 80% of the 10,000 most visited websites,[3] jQuery is the most popular JavaScript library in use today.[4][5] The set of jQuery core features—DOM element selections, traversal and manipulation—enabled by its selector engine (named "Sizzle" from v1.3), created a new "programming style", fusing algorithms and DOM-data-structures; and influenced the architecture of other JavaScript frameworks like YUI v3 and Dojo. Microsoft and Nokia bundle jQuery on their platforms.[7] Microsoft includes it with Visual Studio[8] for use within Microsoft's ASP.NET AJAX framework and ASP.NET MVC Framework while Nokia has integrated it into the Web Run-Time widget development platform.[9] jQuery has also been used in MediaWiki since version 1.16.[10]

8 Code Snippets for New Website Projects Working as a web developer often requires compromise and trying out new systems. Some of your code will turn out to be a flunk, and other codes will become staples in your development process. I have learned a lot about useful code snippets and how greatly these can affect your development process. In this article I’d like to share 8 bits of code which any web developer can use. 1. To get us started I have included my very basic HTML5 webpage template. Also I have included references to 2 Google-hosted scripts. <! 2. I learned about the CSS clearfix method years ago when just first getting into coding. You should copy my code below into any CSS document you’re using with floats in a layout. 3. Each web browser comes packaged with its own set of standard rules for styling documents. Typically web developers want to remove these preset values so that each browser will render the webpage exactly the same. 4. 5. 6. 7. 8. Thankfully the audio and video tags share a similar syntax. Conclusion

Douglas Crockford - Google+ - JSDev JavaScript is a difficult language to test with.… JSDev JavaScript is a difficult language to test with. Unit testing wants to pull each function out to be tested individually, but that extraction can break the amazing implicit structures that nesting can produce. We know how to use closure to obtain privacy, but some advocate the refusal of privacy to favor testability. So I'm thinking that I want to insert some testing infrastructure directly into my program, delivering direct, explicit access to the private material. So I want to code that stuff as tagged comments (similar to the /*jslint*/ comments) and have a tool that converts the comments into executable forms automatically at development time. The program that does this is a companion to JSMin called JSDev.

Ajax (programming) Ajax is not a single technology, but a group of technologies. HTML and CSS can be used in combination to mark up and style information. The DOM is accessed with JavaScript to dynamically display, and allow the user to interact with, the information presented. JavaScript and the XMLHttpRequest object provide a method for exchanging data asynchronously between browser and server to avoid full page reloads. In 1996, the iframe tag was introduced by Internet Explorer to load or to fetch content asynchronously. In 1998, Microsoft Outlook Web App team implemented the first component XMLHTTP by client script. Google made a wide deployment of standards-compliant, cross browser Ajax with Gmail (2004) and Google Maps (2005).[6] The term "Ajax" was publicly stated on 18 February 2005 by Jesse James Garrett in an article titled "Ajax: A New Approach to Web Applications", based on techniques used on Google pages.[1] get-ajax-data.js: send-ajax-data.php: jQuery example

Echo Test Echo Test The first section of this page will let you do an HTML5 WebSocket test against the echo server. The second section walks you through creating a WebSocket application yourself. You can also inspect WebSocket messages using your browser. Try it out! This browser supports WebSocket. Does your browsersupport WebSocket? Firefox 17 Linux Uh-oh, the browser you're using doesn't have native support for WebSocket. The following link lists the browsers that support WebSocket: Location:Use secure WebSocket (TLS) Message: Instructions Press the Connect button. Creating your own test Using a text editor, copy the following code and save it as websocket.html somewhere on your hard drive. html - Inline onclick JavaScript variable

JSON JSON (/ˈdʒeɪsən/ JAY-sən),[1] or JavaScript Object Notation, is an open standard format that uses human-readable text to transmit data objects consisting of attribute–value pairs. It is used primarily to transmit data between a server and web application, as an alternative to XML. Although originally derived from the JavaScript scripting language, JSON is a language-independent data format. Code for parsing and generating JSON data is readily available in many programming languages. The JSON format was originally specified by Douglas Crockford. History[edit] Although JSON was originally based on a non-strict subset of the JavaScript scripting language (specifically, Standard ECMA-262 3rd Edition—December 1999[8]) and is commonly used with that language, it is a language-independent data format. Though JSON is commonly perceived as being a subset of JavaScript and ECMAScript, it allows some unescaped characters in strings that are illegal in JavaScript and ECMAScript strings.[9] Ajax[edit]

5 Ways to Make Ajax Calls with jQuery There are at least five ways to make AJAX calls with the jQuery library. For beginners, however, the differences between each can be a bit confusing. In this tutorial, we'll line them up and make a comparison. Additionally. we'll review how to inspect these AJAX calls with Firebug as well. This section is for those who have no idea what AJAX is. If you don't fall into this category, feel free to skip to the next section. In Gmail, switch from inbox to draft. The key to AJAX's concept is "asynchronous". Now we should know what AJAX actually is. For static content, we may want the response cached. The most common use of AJAX is for loading HTML from a remote location and injecting it into the DOM. Click on the first button named "load()." Below is the JavaScript code for this effect: $.ajaxSetup forces the browser NOT to cache AJAX calls.After the button is clicked, it takes a little while before the new HTML is loaded. Now, let's explore more details of the request with Firebug:

External Interface Tip « ActionScript 3, Flash, Flex Reflections This article will treat solutions to “swfObject.callback() is not a function” problem when using ExternalInterface in Flash/Flex. Ok, not so long ago I had to test some interaction between JavaScript and ActionScript. It wasn’t the first time I was using EI, and since it’s always good to start from a working examle, I set up the one provided by Adobe, test it – works fine. (An important note – you have to run it from a web server and add it to flash player’s security domain. I’ll show you how later). Now in this example the flash function is called the onClick event of form button is fired: while what I needed was to call the AS function as soon as the document loads. and SURPRIIIIIIIISSEEEEEEEE !!!! setTimeout('callAsFunction();', 100) TADAAA, it worked, BUT, only in 9 out of 10 page refreshes. function onFlashReady() { sendToAS("another test message"); } function callJS(value) { onFlashReady(); return "Hi Flash and AS code: Note that you need a TextField on the stage with the name “tf”.

jQuery: The Write Less, Do More, JavaScript Library learn.knockoutjs.com In this first tutorial you'll experience some of the basics of building a web UI with the Model-View-ViewModel (MVVM) pattern using knockout.js. You'll learn how to define a UI's appearance using views and declarative bindings, its data and behavior using viewmodels and observables, and how everything stays in sync automatically thanks to Knockout's dependency tracking (even with arbitrary cascading chains of data). Using bindings in the view In the bottom-right corner, you've got a viewmodel containing data about a person. Modify the two <strong> elements in the view, adding data-bind attributes to display the person's name: <p>First name: <strong data-bind="text: firstName"></strong></p><p>Last name: <strong data-bind="text: lastName"></strong></p> data-bind attributes are how Knockout lets you declaratively associate viewmodel properties with DOM elements. Running the code To run your updated application, click Run in the bottom-left pane, or press Ctrl+Enter. Having trouble?

android-scripting - Scripting Layer for Android brings scripting languages to Android. SL4A's source has moved to github. The issue tracker, wiki, and downloads will continue to be hosted here. Scripting Layer for Android (SL4A) brings scripting languages to Android by allowing you to edit and execute scripts and interactive interpreters directly on the Android device. These scripts have access to many of the APIs available to full-fledged Android applications, but with a greatly simplified interface that makes it easy to get things done. Scripts can be run interactively in a terminal, in the background, or via Locale. SL4A is designed for developers and is alpha quality software. To install SL4A, you will need to enable the "Unknown sources" option in your device's "Application" settings. Still have questions? Want to learn more? Start by reading "Introducing SL4A: The Scripting Layer for Android" by Pieter Greyling and "Packaging and Distributing" by Paul Ferrill. You can buy "Practical Android Projects" on Amazon or directly from Apress. What's Powered by SL4A? Rockets Oplop