My So-Called (Instagram) Life. FAQ - Great Seminars Online. I have never taken an online course, how does it work? 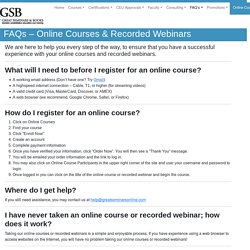 Taking our online courses is a simple and enjoyable process. If you have experience using a web browser to access websites on the Internet, you will have no problem taking our courses online! How do I register for a course? To register for a course, navigate to Seminar Descriptions and click on “Enroll Now” for the course that you choose. Review the items that you are planning on purchasing and click on “Go to Payments”. Can you explain to me how educational credit hours work? A certificate of attendance for contact hours of educational activity (e.g., 5 contact hours, 5 CEUs or 0.5 CEUs depending how your Practice Act determines CEUs in your state) will be awarded to registrants upon completion of a course. Your tuition is tax deductible. Do I need to sign on, or be on the computer at a certain time? No! What kind of computer do I need to take the courses?

TELUS WISE Helping our kids navigate cyberbullying. Facebook's artificial intelligence robots shut down after they start talking to each other in their own language. Facebook abandoned an experiment after two artificially intelligent programs appeared to be chatting to each other in a strange language only they understood. The two chatbots came to create their own changes to English that made it easier for them to work – but which remained mysterious to the humans that supposedly look after them. The bizarre discussions came as Facebook challenged its chatbots to try and negotiate with each other over a trade, attempting to swap hats, balls and books, each of which were given a certain value. But they quickly broke down as the robots appeared to chant at each other in a language that they each understood but which appears mostly incomprehensible to humans.

Download the new Independent Premium app Sharing the full story, not just the headlines. The online platform that empowers survivors of campus sexual assaults. Katherine Lam The statistics on campus sex crimes in the US are sad and sobering. 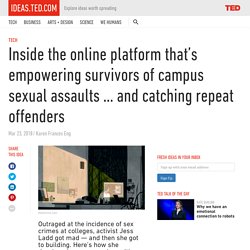 On average, it’s estimated that one in five women is assaulted during her college years, as well as 7 percent of men and 24 percent of transgender and gender non-conforming students. And what occurs after an attack is also disturbing. Most assaults go unreported, and when people do go to the authorities, too often they’re subjected to a series of traumatic experiences: insensitive questioning, skepticism or outright disbelief about their experience, and an opaque investigatory process that places a greater emphasis on preserving the college’s public image than on prosecuting crimes. Reporting an attack shouldn’t add to a person’s suffering, says activist, epidemiologist and TED Fellow Jessica Ladd. 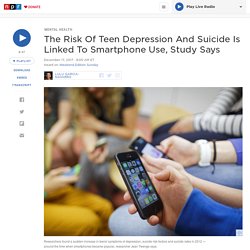 Thomas Trutschel/Photothek via Getty Images hide caption toggle caption Thomas Trutschel/Photothek via Getty Images Researchers found a sudden increase in teens' symptoms of depression, suicide risk factors and suicide rates in 2012 — around the time when smartphones became popular, researcher Jean Twenge says. A new study found that teenagers are increasingly depressed, feel hopeless and are more likely to consider suicide. Twenge's research found that teens who spend five or more hours per day on their devices are 71 percent more likely to have one risk factor for suicide. "It's an excessive amount of time spent on the device. Social Media News.

Tippin.me - Bitcoin made easy. Why online privacy matters — and how to protect yours. As the principal technologist at the American Civil Liberties Union, Christopher Soghoian (TED talk: How to avoid surveillance … with the phone in your pocket) spends much of his time thinking about privacy and surveillance and how individuals can protect themselves from spying. 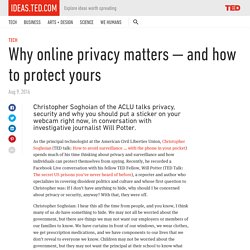 Recently, he recorded a Facebook Live conversation with his fellow TED Fellow, Will Potter (TED Talk: The secret US prisons you’ve never heard of before), a reporter and author who specializes in covering dissident politics and culture and whose first question to Christopher was: If I don’t have anything to hide, why should I be concerned about privacy or security, anyway?

With that, they were off. Christopher Soghoian: I hear this all the time from people, and you know, I think many of us do have something to hide. Viewables. Former Facebook executive: social media is ripping society apart. Netwise. Computeresque. AIyaiYAIyiyAI. Edgy. Quotability. Socio.Logical.