The Genre of Tragedy Reading 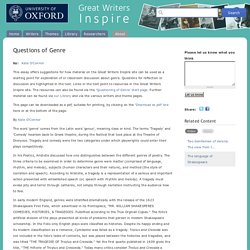 Questions for reflection or discussion are highlighted in the text. Links in the text point to resources in the Great Writers Inspire site. The resources can also be found via the 'Questioning of Genre' start page. Further material can be found via our Library and via the various writers and theme pages. This page can be downloaded as a pdf, suitable for printing, by clicking on the 'Download as pdf' link here or at the bottom of the page. By Kate O'Connor The word 'genre' comes from the Latin word 'genus', meaning class or kind. In his Poetics, Aristotle discussed how one distinguishes between the different genres of poetry. In early modern England, genres were stratified dramatically with the release of the 1623 Shakespeare First Folio, which advertised in its frontispiece, "MR. So what qualifies as a tragicomedy? Dr. Great Writers Inspire. Great Writers Inspire. The Essence of Shakespearean Tragedy. 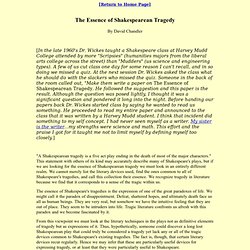 Wickes taught a Shakespeare class at Harvey Mudd College attended by more "Scripsies" (humanities majors from the liberal arts college across the street) than "Mudders" (us science and engineering types). A few of us cut class one day for some reason I can't recall, and in so doing we missed a quiz. At the next session Dr. Wickes asked the class what he should do with the slackers who missed the quiz. Someone in the back of the room called out, "Make them write a paper on The Essence of Shakespearean Tragedy. 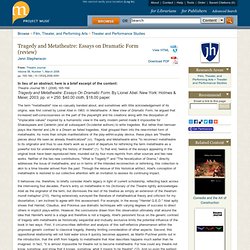 By Lionel Abel. New York: Holmes & Meier, 2003; pp. vi + 250. $40.00 cloth, $18.00 paper. The term "metatheatre" now so casually bandied about, and sometimes with little acknowledgement of its origins, was first coined by Lionel Abel in 1963. In Metatheatre: A New View of Dramatic Form, he argued that increased self-consciousness on the part of the playwright and his creations along with the dissipation of "implacable values" inspired by a humanistic view in the early modern period made it impossible for Shakespeare and Calderón (and all subsequent Occidental authors) to write tragedies.

But rather than bemoan plays like Hamlet and Life is a Dream as failed tragedies, Abel grouped them into the new-minted form of metatheatre. It behooves me, therefore, to briefly consider Abel's legacy in light of current scholarship, reflecting back across the intervening four decades. Meta-Theatre and Shakespeare: Research With Professor Kevin Dettmar. Metatheatricality. Ian Johnston, "Dramatic Structure: Comedy and Tragedy" [The following has been excerpted from Ian Johnston's introductory lecture to his English 366: Studies in Shakespeare course at Malaspina University College in British Columbia; it is the best introductory discussion I have ever read on the subject of dramatic comedy and tragedy, and it is especially useful as an introduction to the major themes of King Lear. 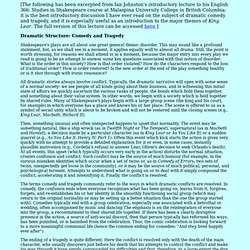 The full version of this lecture can be accessed here.] Dramatic Structure: Comedy and Tragedy Shakespeare's plays are all about one great general theme: disorder. This may sound like a profound statement, but, as we shall see in a moment, it applies equally well to almost all drama. Still, the point is worth stressing, for reasons we shall attend to in a moment, because the major entry into every play we read is going to be an attempt to answer some key questions associated with that notion of disorder: What is the order in this society? 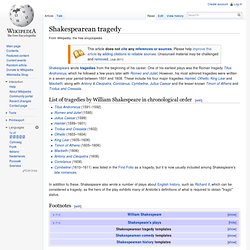 The Essence of Shakespearean Tragedy.