33 Unbelievable Places To Visit Before You Die. I Can't Believe These Actually Exist On Earth... 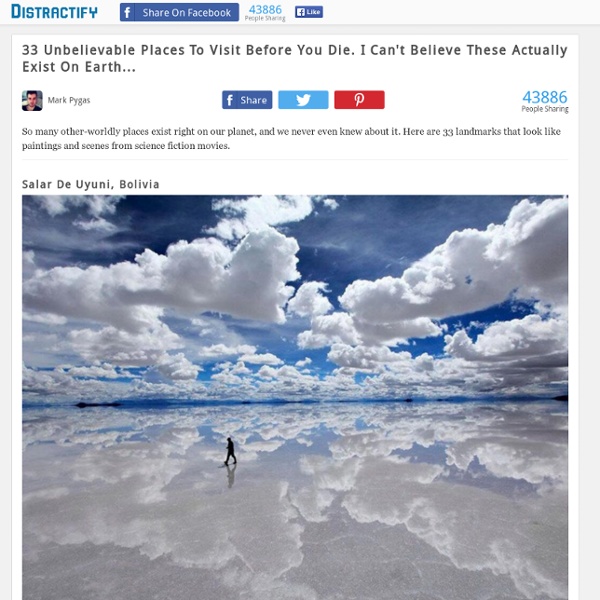 So many other-worldly places exist right on our planet, and we never even knew about it. Here are 33 landmarks that look like paintings and scenes from science fiction movies. earthporm.com During the rainy season, the world’s largest salt flat becomes the world's largest mirror. The Salar was born when several prehistoric lakes joined into one. The salt flat is so reflective, it’s used to calibrate satellites. michaelyamashita.com These unqiuely tall and thin mountains are so alien that they were used in James Cameron’s “Avatar.” niccolobonfadini.comniccolobonfadini.com These sentinels are actually giant trees covered in snow and ice. apod.nasa.gov natureflip.com This 240-meter-long cave system has been one of Guilin, China’s most popular attractions for over 1200 years. amusingplanet.com all-that-is-interesting.com Ice caves are temporary structures that form at the edge of glaciers when flowing water melts a hole into glaciers. amusingplanet.com all-that-is-interesting.com wikipedia.org

Science experiment on soil erosion This post is also available in: Italiano Science experiment on soil erosion – This experiment, which has a tremendous visual impact due to its simplicity, it will demonstrate the relationship between precipitation, soil erosion, protection of watercourses and vegetation. A very simple experiment that stresses the importance of the vegetation cover of the soil. You can propose in three versions: – Preparing the planting of seedlings – Using plants ready to be transplanted – Using soil samples. Science experiment on soil erosion – First version Ten Illustrator power moves you MUST know In most professions, one goes through intense training—intended to help a person develop the ability to act on instinct—where the body learns to act automatically in response to a situation without the need to mentally go through each required step. Even in everyday living, we’ve learned to adapt to our environment that allows us to perform basic functions without losing focus on the task at hand. Examples are dialing a familiar phone number, or adjusting the radio in your car. I’ve seen teenagers (like my own for example) who can literally unholster their mobile phone, send a text, and reholster the phone faster than Neo can dodge a bullet (all while holding a conversation). When using Illustrator, you want to get to a point where basic functions become instinct – you do them without thinking about it.

A Pale Blue Dot: The Ultimate Earth "selfie..." There is a bit more to the Pale Blue Dot that can be heard from Carl Sagan himself at this Library of Congress link. Take few moments it is worth listening to Sagan describe what he suggested to NASA as Voyager I was leaving the solar system and why he thought it was so important to take this photo. Now, read the words of his essay here. ‎aplus.com/a/20-amazing-hotels 1. Äscher Cliff, Switzerland myswitzerland.com 2. NOAA SciJinks 129 Hurricane Simulation Explore the relationship between sea surface temperatures and... hurricane strength 128 Grow Snow Crystals See how temperature affects the shape of snowflakes. 125 Whirlwind Disaster Save the words from the swirling hurricane! 27 How does a hurricane form? And what does Category 5 mean? 130 Rescue 406 Learn about the NOAA-operated SARSAT system (Search And Rescue...

Curious Kids: What makes the Earth spin on its axis every day? This is an article from Curious Kids, a series for children. The Conversation is asking kids to send in questions they’d like an expert to answer. All questions are welcome – serious, weird or wacky!

Sir Peter Blake Trust Throw us a question about our voyage & research, and our explorer on duty will answer it as soon as they are in range. Q: Hi What kind of research/ experiments are you conducting on this voyage? Thanks - Heather, Muriwai Sandy Hook Elementary School: closed in 2008, a stage in 2012 “You can fool some of the people all of the time and all of the people some of the time, but you cannot fool all of the people all of the time”–Abraham Lincoln As Wolfgang Halbig prepares to head to Newtown to pursue the truth about Sandy Hook and confront the Newtown School Board with questions, more and more evidence suggests that Sandy Hook Elementary was not even an operating school. Not only does information about the alleged victims of the shooting–their names, their ages and their sex–not appear in the “State Police Final Report” from Connecticut, but the “autopsy photos” that accompany the report were redacted in their entirety. Actual proof of real victims is virtually non-existent. A review of the redacted video coverage from the “Final Report” suggests there was a half-hearted effort to create the appearance of a thorough investigation without the substance, which is what we would expect if the entire exercise were no more than a random compilation of images. Jim Fetzer

I Am The Earth - a song for children about the Earth and Environment I am the river flowingI am the desert dryI am the four winds blowingI am the sunset sky I am the forest breathingI am the ocean wideI am the storm clouds gatheringI am the mountain high I am the EarthI am the EarthI am the EarthI am the Earth We are the children growingYou are the place we liveWe are the seed you’re sowingWe are the life you give We are the future risingWe will be your voiceWe will watch and learn from youWe will make the choice What is the Earth system? There are many interacting systems that make up the Earth, many of which are dynamic. These notes discuss the importance of understanding the concept of systems with emphasis on the water cycle, and are aimed specifically for teachers. What is the Earth system? Scientists increasingly view Earth as a dynamic system – a combination of interrelated, interdependent or interacting parts forming a collective whole or entity. On a macro level, the Earth system maintains its existence and functions as a whole through the interactions of its parts, called components.