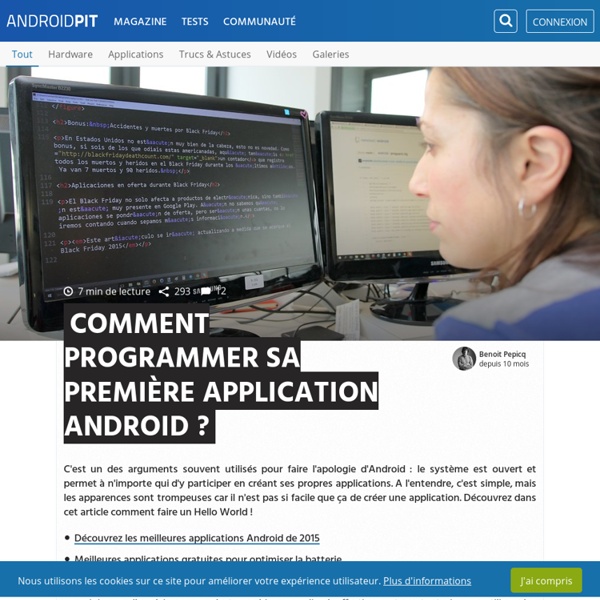 Installing App Inventor 2 Setup on Windows Installing the Windows software for App Inventor Setup has two parts: Installing the App Inventor Setup software package. This step is the same for all Android devices, and the same for Windows XP, Vista, Windows 7, 8.1, and 10.If you choose to use the USB cable to connect to a device, then you'll need to install Windows drivers for your Android phone. NOTE: App Inventor 2 does not work with Internet Explorer. For Windows users, we recommend using either Chrome or Firefox as your browser for use with App Inventor. You must perform the installation from an account that has administrator privileges. Scratch Developed by the Lifelong Kindergarten with the MIT's Media Lab research group, Scratch is a new programming language that facilitates the creation of interactive, cartoons, games, musical compositions of stories, simulations and their shares on the Web. Scratch is a free software designed to introduce students from the age of 8, to fundamental concepts in mathematics and computer science. It is based on a fun of algorithmic approach, to help them to create, to reason and to cooperate. It also promotes the sharing on the Web.

USB Rubber Ducky Deluxe - HakShop by Hak5 Take Social Engineering to the next level with a USB Rubber Ducky Deluxe hidden inside an inconspicuous "thumb drive" case. All the fixings included. Since 2010 the USB Rubber Ducky has been a favorite among hackers, penetration testers and IT professionals. With origins as a humble IT automation proof-of-concept using an embedded dev-board, it has grown into a full fledged commercial Keystroke Injection Attack Platform. Build and run your app Android Studio sets up new projects to deploy to the Android Emulator or a connected device with just a few clicks. Once your app is installed, Instant Run allows you to push code changes without building a new APK. To build and run your app, select Run > Run in the menu bar (or click Run in the toolbar). If it's the first time running the app, Android Studio asks you to select a deployment target as shown in figure 1.

AI2 Project Merger Tool: combine two App Inventor projects into one Developed by Kate Feeney of Mills College, the AI Merger Tool lets multiple users develop screens for an app in different projects and later merge the screens to produce a single project. This is useful for classroom projects, and to anyone developing an app with a partner. Related Reading:Encouraging Collaboration through App Inventor, thesis by Kate Feeney ABSTRACT: App Inventor is a free, open source application that permits people with any level of programming background to create software applications for the Android operating system. At the time of its open source release, it lacked important resources for supporting collaboration: documentation for source code contributors and technological support for users developing apps in a group environment.

12 Sites and Apps for Learning to Code When the conversation amongst educators turns to programming, Scratch is often the first resource that is mentioned. Scratch allows students to program animations, games, and videos through a visual interface. Students create their programs by dragging together blocks that represent movements and functions on their screens. Une journée dans la vie de Lili Eting (et son chat) : petit précis de diplomatique souriante de Marie-Anne Chabin Welcome to Lulu! We notice you are using a browser version that we do not support. For you to have the best experience on Lulu.com, we recommend using the current versions of Firefox, Chrome, Safari, or upgrading to Internet Explorer 9 (or higher). Your notification has been sent

Install Android Studio   Setting up Android Studio takes just a few clicks. First, be sure you download the latest version of Android Studio. Windows Part 1: Basic Bluetooth communications using App Inventor (Some very minor updates were made to this in November 2019). This tutorial covers basic App Inventor Bluetooth communications code. Subsequent tutorials will add additional features. To implement and test this sample code, you need access to two Android devices – one to act as a Bluetooth “server” and the other to act as a “Bluetooth” client. I tested this code using an old LG smart phone running Android 2.2 and a new Nexus 5 running Android 5.0.1. I also tested this code using the Nexus 5 paired with a Nexus 7 tablet.

Europe Code Week 360° virtual tour creation with CoSpaces_Edu The objective of this lesson plan is to create different Virtual Reality brochures or touristic guides in which students show their knowledge of their community, their city, a culture, or a civilization. This lesson involves getting students to do a significant amount of research and data collection, organize the information they gathered, and decide how to best present it in narrated or written format.CoSpaces Edu allows students to use 360° degree images onto which complementary information can be added through different types of icons or shapes available on the web or on the platform itself.The use of this type of visuals and the creation of 360° walks or itineraries is absolutely fantastic for class. It offers a way of bringing students closer to distant or nearby places and offering them a full view of the place. Types:

Learn Play, Design & Code Retro Arcade Games Grades 2+ | Blocks CS First Unplugged Grades 2-8 | Blocks, Unplugged, Scratch Discover Python with Silent Teacher Grades 6+ | Python Importing libraries into Android Studio Not all Android libraries out there provide a Maven dependency to include it into your project. Sometimes you will just have to resort to the original method of just including the source code in your project. For this example, I will be importing the SlidingMenu library for Android by Jeremy Feinstein.