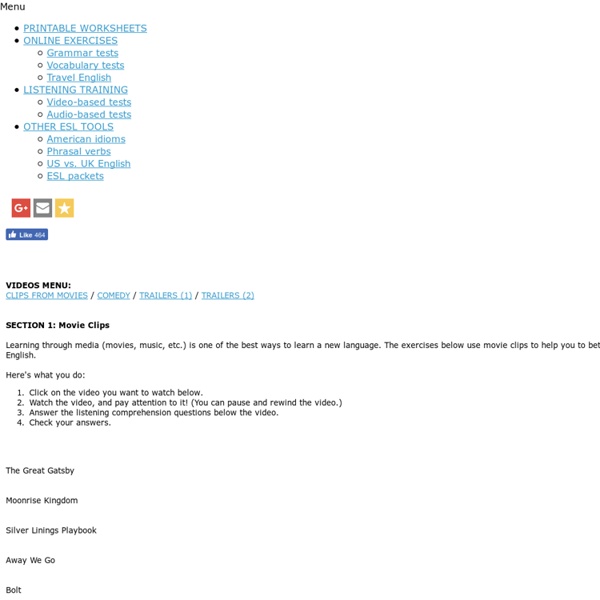 SECTION 1: Movie Clips Learning through media (movies, music, etc.) is one of the best ways to learn a new language. The exercises below use movie clips to help you to better understand spoken English. Here's what you do: Click on the video you want to watch below.Watch the video, and pay attention to it! (You can pause and rewind the video.)Answer the listening comprehension questions below the video.Check your answers. The Great Gatsby Moonrise Kingdom Silver Linings Playbook Away We Go Bolt Tinker Tailor Soldier Spy Chronicle The Avengers Adventureland The Royal Tenenbaums NOTE: All of these videos are protected by copyright.

Powerful Tools for Teaching and Learning: Web 2.0 Tools About the Course Are you overwhelmed by the tidal wave of new technology tools available for teachers and learners? Powerful Tools for Teaching and Learning: Web 2.0 Tools can help channel that flood into a manageable power source for student engagement and motivation in your classroom! This course is designed to provide teachers with strategies to effectively integrate Web 2.0 technologies into their instruction. Being Batman by Ryan Freeman We’re living in the age of the superhero. Rising from comic book pages, they have sprung forth to dominate both the box office and our collective popular culture. Heck, even my 2-year-old knows who Spider-man is.

5 fun ways to use a Dictogloss Listening is important. Collaboration is important. Writing is important. Your Smarticles: QR Code Ideas and Resources QR Code Activities for YOUR Classroom! Below are some QR Code Scavenger Hunts that I have designed to be fully printable and ready to use. As long as you have a wi-fi enabled smart device that can scan, you can use these ‘hunts’ to support student literacy skills. #1. QR Code Context Clue Scavenger Hunt This Scavenger Hunt allows students to practice utilizing context clues while having fun!

45 ways to avoid using the word 'very' A posthaven user upvoted this post. — habebaakiar 3 years ago — barcahaters 3 years ago — Jan Arzooman 3 years ago — Y.Babadogan 3 years ago Does Love Last Forever? by Pete Baker On it’s surface, Does Love Last Forever? by The Glue Society’s Pete Baker plays like a traditional love-story – boy meets girl, they fall in love, the live happily(ish) ever after. It’s a story of young love (mix-tapes and all) and how that love changes over the years. A story we’ve heard a million times before…right? But what if the aim of this film wasn’t to (only) create a relatable, emotive romantic narrative?

The History of English - Old English (c. 500 - c.1100) About 400 Anglo-Saxon texts survive from this era, including many beautiful poems, telling tales of wild battles and heroic journeys. The oldest surviving text of Old English literature is “Cædmon's Hymn”, which was composed between 658 and 680, and the longest was the ongoing “Anglo-Saxon Chronicle”. But by far the best known is the long epic poem “Beowulf”. “Beowulf” may have been written any time between the 8th and the early 11th Century by an unknown author or authors, or, most likely, it was written in the 8th Century and then revised in the 10th or 11th Century. Free Animated Films: From Classic to Modern Advertisement Watch over 70 free animations online. The collection features some classics, plus some modern gems. You'll find a number of animations of literary classics in the mix too. For more great films, please visit our complete collection, 1,150 Free Movies Online: Great Classics, Indies, Noir, Westerns, etc.. 66 Oscar-Nominated-and-Award-Winning Animated Shorts Online, Courtesy of the National Film Board of Canada - Free - A big collection of prize-winning animated short films.6 Animations of Stories & Poems by Shel Silverstein - Free - Includes “Ickle Me, Pickle Me, Tickle Me Too” from Where the Sidewalk Ends.13 Experimental Short Films by Tezuka Osamu - Free - Early animations by Tezuka Osamau, often called the Walt Disney of Japan.30 Films from the 1970s by Computer Animation Pioneer Lillian F.

Socialising 4: Active listening Perhaps the most important skill connected with socialising is to ‘shut up and listen’. In practice, it can be very difficult to resist the temptation to turn every conversation into a conversation about what we consider the most interesting thing in the world, i.e. ourselves. The most skilful active listeners include nurses, social workers, psychotherapists and counsellors, so this lesson focuses especially on the techniques studied and used by these professionals. Topic: Socialising and active listening Level: Intermediate (B2) and above Aims: To raise awareness of the importance of active listening skills, and some situations where they are especially important.To teach some language and techniques for active listening, including effective use of body language.To provide practice and feedback of the situation of actively listening to a friend or colleague talking about a difficult experience.

Think-Pair-Share Think-Pair-Share activities pose a question to students that they must consider alone and then discuss with a neighbor before settling on a final answer. This is a great way to motivate students and promote higher-level thinking. Even though the activity is called think-"PAIR"-share, this is the term many instructors use for pairs and small groups (three or four students) alike.