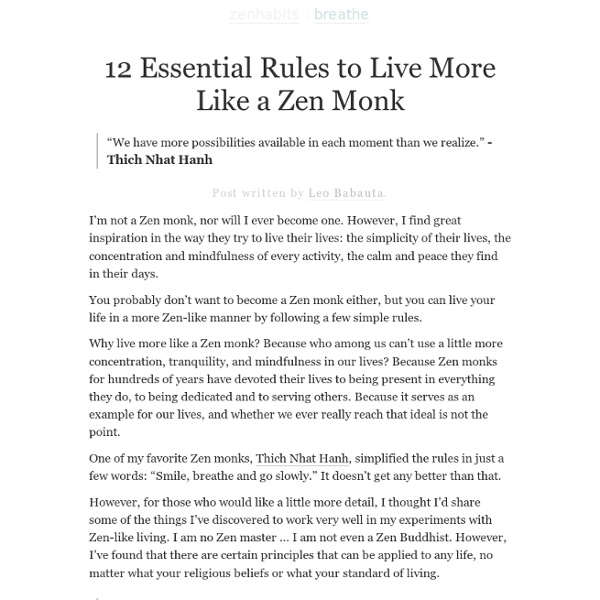 “We have more possibilities available in each moment than we realize.” - Thich Nhat Hanh By Leo Babauta I’m not a Zen monk, nor will I ever become one. However, I find great inspiration in the way they try to live their lives: the simplicity of their lives, the concentration and mindfulness of every activity, the calm and peace they find in their days. You probably don’t want to become a Zen monk either, but you can live your life in a more Zen-like manner by following a few simple rules. Why live more like a Zen monk? One of my favorite Zen monks, Thich Nhat Hanh, simplified the rules in just a few words: “Smile, breathe and go slowly.” However, for those who would like a little more detail, I thought I’d share some of the things I’ve discovered to work very well in my experiments with Zen-like living. “Zen is not some kind of excitement, but concentration on our usual everyday routine.” - Shunryu Suzuki Do one thing at a time. “Before enlightenment chop wood and carry water.

Faith of Our ForeFathers December 2006 The Founders are once again in vogue. More than 35 books have been published about them just since January according to Gordon Wood, the foremost authority on that era. One of the sub topics of these books concerns the depth of the religious convictions of these men, particularly the Big Six: Washington, Franklin, Jefferson, Madison, Hamilton, and Adams. Authors coming from a conservative religious perspective believe that the Founders were highly religious and that the religious convictions of these men have been underestimated or deliberately ignored. From Sand to Processor or How a CPU is made - Intel It is hard to believe that a modern processor (CPU) is the most complex product in the world. What is so complex in this piece of metal? In this article I will try to explain how a modern processer (CPU) is made from the sand.

DNA Animations Animation Adenine (A), cytosine (C), guanine (G), and thymine (T) are the components of nucleic acid that make up DNA. In 1950, Erwin Chargaff published a paper stating that in the DNA of any given species, the ratio of adenine to thymine is equal, as is the ratio of cytosine to guanine. This became known as Chargaff's ratio, and it was an important clue for solving the structure of DNA. Chronic myeloid leukemia (CML) is caused by a mutation that leads to an abnormal protein that is always active. A Better Life In 100 Ways You don’t like your life? Change it! Change your life for the better! Don’t have any clue on how to do it?

4 Ways to Focus Edit Article262,000 views Edited by Santiago.brady and 35 others Edited 23 hours ago Four Methods:Improving Your FocusBeing PreparedGetting OrganizedAvoiding Distractions Improving your focus can make you a better student or employee as well as a happier and more organized person.