White Wind Zen Community. [Please note:This text is under continual construction.This version is current as of May, 2016.] 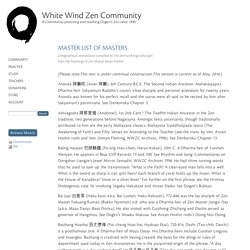 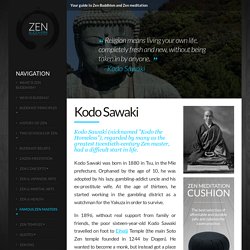 Kodo Sawaki was born in 1880 in Tsu, in the Mie prefecture. Orphaned by the age of 10, he was adopted by his lazy, gambling-addict uncle and his ex-prostitute wife. At the age of thirteen, he started working in the gambling district as a watchman for the Yakuza in order to survive. In 1896, without real support from family or friends, the poor sixteen-year-old Kodo Sawaki travelled on foot to Eiheiji Temple (the main Soto Zen temple founded in 1244 by Dogen). He wanted to become a monk, but instead got a place in the temple as a servant. He was ordained as a Zen monk in 1897 at Daiji-ji Temple by Sawada Koho, the head monk.

When the Russo-Japanese war broke out in 1904, Sawaki was sent to the front where he spent close to four years as an infantryman. Next: Taisen Deshimaru Please share: Jikishoan Zen Buddhist Community. Bluehost.com. Sydney Zen Centre - Australia's original Zen Buddhist community. Blog « Karen Maezen Miller's Cheerio Road. I hear quite a bit about compassion, that brand of selfless love we usually judge ourselves to be lacking. 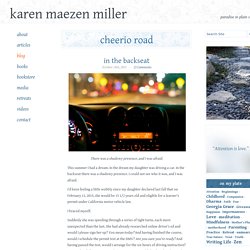 Talking about compassion may be one reason it is so frequently misunderstood as something that we should be doing. But compassion doesn’t need doing. It exists already in the harmony of things just as they are. Discord comes from our doing — when we impose our judgment, expectations, fear and greed. Compassion comes from undoing. We don’t have to go anywhere else to find compassion. Right in front of you, every moment of every day, is the only place to practice compassion. The Zen of Not Knowing. Beginner’s mind is Zen practice in action. 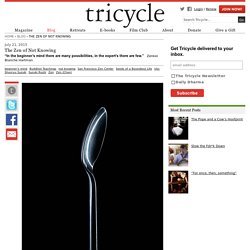 It is the mind that is innocent of preconceptions and expectations, judgments and prejudices. Beginner’s mind is just present to explore and observe and see “things as they are.” I think of beginner’s mind as the mind that faces life like a small child, full of curiosity and wonder and amazement. “I wonder what this is? I wonder what that is? I was having lunch with Indigo, a small child, at City Center [a Soto Zen practice center in San Francisco]. Watching Indigo, you can see the innocence of “What is it?”

Can we look at our lives in such a way? We all want to be the one who knows. As Suzuki Roshi said in the prologue to Zen Mind, Beginner’s Mind, “In the beginner’s mind there are many possibilities, in the expert’s there are few.” How can we cultivate this mind that is free to just be awake? I don’t know about you, but when I started to sit, I really began to see how many fixed ideas and fixed views I had. Gallery Stock.