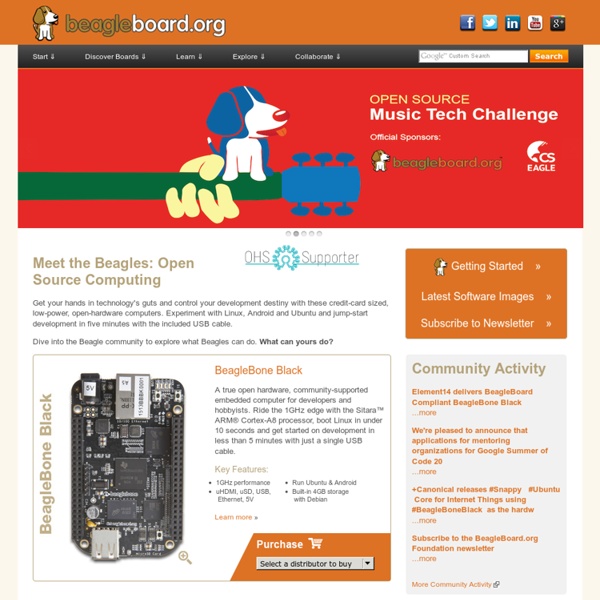 Get your hands in technology's guts and control your development destiny with these credit-card sized, low-power, open-hardware computers. Experiment with Linux, Android and Ubuntu and jump-start development in five minutes with the included USB cable. Dive into the Beagle community to explore what Beagles can do. What can yours do? BeagleBone Black A true open hardware, community-supported embedded computer for developers and hobbyists.

RPi.GPIO 0.4.1a A module to control Raspberry Pi GPIO channels This package provides a class to control the GPIO on a Raspberry Pi. Note that this module is unsuitable for real-time or timing critical applications. This is because you can not predict when Python will be busy garbage collecting. It also runs under the Linux kernel which is not suitable for real time applications - it is multitasking O/S and another process may be given priority over the CPU, causing jitter in your program. If you are after true real-time performance and predictability, buy yourself an Arduino ! Embedded board manufacturers and dealers Difficult to choose between manufacturers of embedded system boards supporting Linux and other Free Software operating systems? There are so many of them now… To help you find the best hardware solution for your system, we are keeping a list of suppliers making attractive products. Here are the conditions to be on the list:

Evil genius behind the Flashback OS X trojan may have been uncovered (Updated) A year to the week that a newer, more virulent version of the Flashback trojan was found to have infected more than 500,000 Mac computers, investigative reporter Brian Krebs has identified a young Russian man who has taken credit as the mastermind behind the malware. Flashback.K, as that version was known, was a breakthrough because it was among the first pieces of mainstream malware to hijack Macs even when users didn't enter an administrative password. Rather than trick users into installing what appeared to be an update to the Adobe Flash program—as previous Flashback versions did—this new release exploited a security bug in Apple's version of the Java software framework. Users who had it installed and visited booby-trapped websites were infected with no warning. Even after Apple released software to remove Flashback, the malware was still able to thrive in the following weeks, expanding its infection base to 650,000 machines.

RPiconfig As the Raspberry Pi doesn't have a conventional BIOS, the various system configuration parameters that would normally be kept and set using the BIOS are now stored in a text file named "config.txt". The Raspberry Pi config.txt file is read by the GPU before the ARM core is initialized. This file is an optional file on the boot partition. It would normally be accessible as /boot/config.txt from Linux, but from Windows (or OS X) it would be seen as a file in the accessible part of the card. systems : embedded electronic boards development Reusing the Armadeus design. Our products are quite fullfilling your requirements but a feature is missing or the form factor is not the right one ? We can quickly adapt our boards based on your specification. This process ensures the best ROI and reduces the risks.

HTG Explains: Is Tor Really Anonymous and Secure? Some people believe Tor is a completely anonymous, private, and secure way to access the Internet without anyone being able to monitor your browsing and trace it back to you – but is it? It’s not quite that simple. Tor isn’t the perfect anonymity and privacy solution. It has several important limitations and risks, which you should be aware of if you’re going to use it.

Wiring Update: 14th May, 2013 wiringPi version 2 has been released and now has its own website ( to look after it. Most of the documentation on the projects site has been copied over to it the new site, but there may still be 1 or 2 pages that are still missing. I’d encourage you to use the new site if possible where there will be a forum and wiki (when I get time to implement them!) BoardX: The Open Source Miniature Motherboard by Kevin Green Hey there! Check out the new demonstration of how to get started using BoardX with the Arduino SDK in under 3 minutes! BoardX is a collection of electronic circuit boards that stack on top of one another to share resources, communicate, and extend the functionality of one another. This system is built on the motherboard that acts as both an electrical and structural foundation. Unlike similar products (but much like a familiar PC system), the motherboard does not come with a processor pre-installed.

Possible security disasters loom with rollout of new top-level domains Plans to populate the Internet with dozens of new top-level domains in the next year could give criminals an easy way to bypass encryption protections safeguarding corporate e-mail servers and company intranets, officials from PayPal and a group of certificate authorities are warning. The introduction of Internet addresses with suffixes such as ".corp", ".bank", and ".ads" are particularly alarming to these officials because many large and medium-sized businesses use those strings to name machines inside their networks. If the names become available as top-level domains to route traffic over the Internet, private digital certificates that previously worked only over internal networks could potentially be used as a sort of skeleton key that would unlock communications for huge numbers of public addresses. The report went on to say that the number of "short name" certificates that could collide with the new domains is almost certainly much higher.

wiringpi 1.0.5 A python interface to WiringPi library which allows for easily interfacing with the GPIO pins of the Raspberry Pi. Also supports i2c and SPI WiringPi: An implementation of most of the Arduino Wiring functions for the Raspberry Pi Prerequisites: You must have python-dev installed If you manually rebuild the bindings with swig -python wiringpi.i then cat wiringpi_class.py >> wiringpi.py to get the class-based wrapper Hardware Hackers Create a Modular Motherboard An ambitious group of hardware hackers have taken the fundamental building blocks of computing and turned them inside out in an attempt to make PCs significantly more efficient. The group has created a motherboard prototype that uses separate modules, each of which has its own processor, memory and storage. Each square cell in this design serves as a mini-motherboard and network node; the cells can allocate power and decide to accept or reject incoming transmissions and programs independently. Together, they form a networked cluster with significantly greater power than the individual modules.