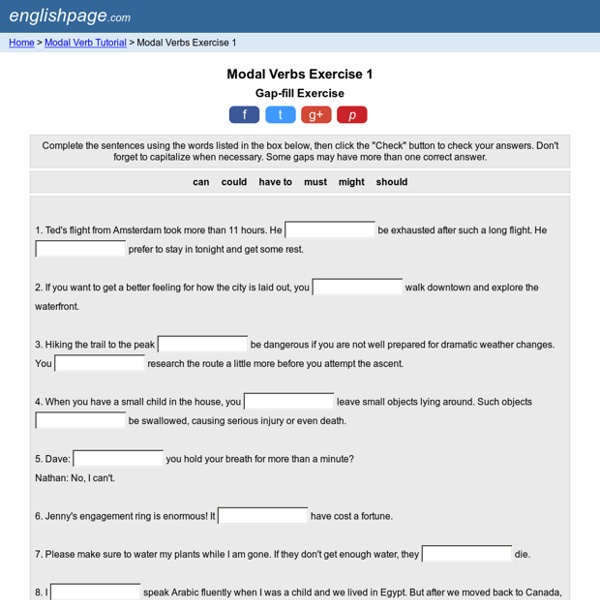 The Coordinating Conjunction Use a coordinating conjunction when you want to give equal emphasis to two main clauses. The pattern for coordination looks like this: Subordination, however, emphasizes the idea in the main clause more than the one in the subordinate clause. Generally, the patterns look like these: Read the pairs of sentences that follow. To survive the fetal pig dissection, Rinalda agreed to make all of the incisions, and Frances promised to remove and label the organs. Modal Verb Tutorial Modals are special verbs which behave very irregularly in English. Englishpage.com has created one of the most in-depth modal tutorials in print or online. Study the modal explanations and complete the associated exercises and take another step toward English fluency. If you want to use the Modal Verb Tutorial as a reference only and do not want to complete the tutorial Click Here . The tutorial should be completed as follows: 1. 2. What are Modal Verbs? Modal verbs are special verbs which behave very differently from normal verbs. 1. Examples: He can speak Chinese. 2. He should not be late. 3. He will can go with us. Common Modal Verbs For the purposes of this tutorial, we have included some expressions which are not modal verbs including had better, have to, and have got to. Your personal online English school.

Perfect Modals 1 Perfect Modals 1 Type the correct perfect modal for the following sentences. Sometimes negative forms are used. When you have answered all the questions, click on the Get score button at the bottom of the page to see your score and the correct answers. Your house looks great. Score = Questions answered incorrectly: Correct answers: Verb Tense Tutorial Verb tenses are verb forms (went, go, will go) which English speakers use to talk about the past, present, and future in their language. There are twelve verb tense forms in English as well as other time expressions such as used to. For English learners, knowing how to use English tenses can be quite a challenge. Never fear. How to use this tutorial: 1. 2. 3. Verb Tense Exercises About the Verb Tense Chart Look at the verb tense chart above. There are also three simple tenses, three continuous tenses, three perfect tenses and three perfect continuous tenses. For example, all simple tenses have similar uses. Did you also notice that present tenses and past tenses only have one form whereas future tenses have two forms? Common Questions about Verb Tenses How can I learn verb tenses? Our native language changes the way we think about time. For this reason, you have to learn to think like an English speaker. Make sure you understand the details. How many verb tenses are there?

Helping and Modal Auxiliary Verbs Helping verbs or auxiliary verbs such as will, shall, may, might, can, could, must, ought to, should, would, used to, need are used in conjunction with main verbs to express shades of time and mood. The combination of helping verbs with main verbs creates what are called verb phrases or verb strings. In the following sentence, "will have been" are helping or auxiliary verbs and "studying" is the main verb; the whole verb string is underlined: As of next August, I will have been studying chemistry for ten years. Students should remember that adverbs and contracted forms are not, technically, part of the verb. Shall, will and forms of have, do and be combine with main verbs to indicate time and voice. I shall go now. Modal Auxiliaries Other helping verbs, called modal auxiliaries or modals, such as can, could, may, might, must, ought to, shall, should, will, and would, do not change form for different subjects.

Appositives Summary: This handout defines appositives and explains how they are used. Contributors:Chris Berry, Dana Lynn DriscollLast Edited: 2013-04-18 03:29:26 An appositive is a noun or pronoun — often with modifiers — set beside another noun or pronoun to explain or identify it. Here are some examples of appositives (the noun or pronoun will be in blue, the appositive will be in red). Your friend Bill is in trouble. My brother's car, a sporty red convertible with bucket seats, is the envy of my friends. The chief surgeon, an expert in organ-transplant procedures, took her nephew on a hospital tour. An appositive phrase usually follows the word it explains or identifies, but it may also precede it. A bold innovator, Wassily Kandinsky is known for his colorful abstract paintings. The first state to ratify the U. A beautiful collie, Skip was my favorite dog. Punctuation of appositives Here are some examples. The popular US president John Kennedy was known for his eloquent and inspirational speeches.

Learning Academic Vocabulary Here are some suggestions about using the AWL Highlighter and the AWL Gapmaker to help you expand your academic vocabulary. 1. Find a text that interests you. "The plans include planting trees and hedges to protect crops from grazing animals and wind erosion." 4. "Soil erosion is a problem for the farmers in my region." 6. Popular mind maps - Mind42 12 Good Research and Citation Tools for Students November 5, 2014 "12 Helpful Tools for Research and Citations" is an excellent list created by Kira DeVaul and shared on Graphite. This list comprises a number of useful web tools that can help students during their research. As a process, research is made up of different interconnected stages: The first phase is the search for information, reading sources and taking notes, doing the write up and creating a bibliography for references. Kira's list provides web tools that students can draw on when working on each stage of the research process.

Мен озиме уаде беремин вкга уатска иньер... Academic Vocabulary Word List Academic Word List Coxhead (2000). The most frequent word in each family is in italics. There are 570 headwords and about 3000 words altogether. If you have an iPhone or an Android phone and want to practise these words, you could try: Flashcards Deluxe. *Definitions linked to the online Cambridge Dictionary by permission of Cambridge University Press.