Modals in English Grammar. Helping and Modal Auxiliary Verbs. Helping verbs or auxiliary verbs such as will, shall, may, might, can, could, must, ought to, should, would, used to, need are used in conjunction with main verbs to express shades of time and mood. 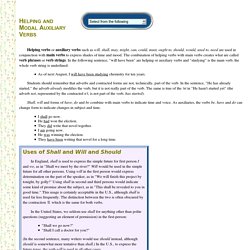 The combination of helping verbs with main verbs creates what are called verb phrases or verb strings. In the following sentence, "will have been" are helping or auxiliary verbs and "studying" is the main verb; the whole verb string is underlined: As of next August, I will have been studying chemistry for ten years. Students should remember that adverbs and contracted forms are not, technically, part of the verb. In the sentence, "He has already started. " the adverb already modifies the verb, but it is not really part of the verb. Shall, will and forms of have, do and be combine with main verbs to indicate time and voice. I shall go now. Modal Auxiliaries For more about giving to Capital, write to CCC Foundation, 950 Main Street, Hartford, CT 06103. Modal verbs Archives. Modal Verbs. Learning modal verbs can be difficult for some learners of the English language. 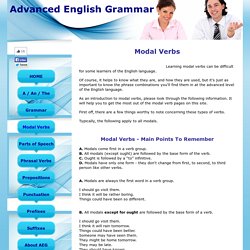 Of course, it helps to know what they are, and how they are used, but it's just as important to know the phrase combinations you'll find them in at the advanced level of the English language. As an introduction to modal verbs, please look through the following information. It will help you to get the most out of the modal verb pages on this site. First off, there are a few things worthy to note concerning these types of verbs. Used to - learn to speak about things in the past. This will be quite a short post. 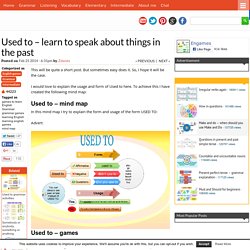 But sometimes easy does it. So, I hope it will be the case. I would love to explain the usage and form of Used to here. To achieve this I have created the following mind map: Used to – mind map In this mind map I try to explain the form and usage of the form USED TO: Advert: Used to – games There are two simple games to practise the grammar explained above. Used to – On Target. Used to grammar activities. The phrase USED TO is one of the highly productive chunks in English. 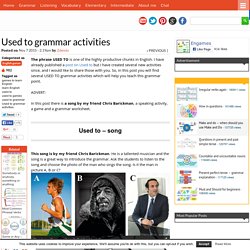 I have already published a post on Used to but I have created several new activities since, and I would like to share those with you. So, in this post you will find several USED TO grammar activities which will help you teach this grammar point. In this post there is a song by my friend Chris Barickman, a speaking activity, a game and a grammar worksheet. This song is by my friend Chris Barickman. He is a tallented musician and the song is a great way to introduce the grammar. After the song, it is the ideal time to highlight the grammar. Remember to emphasize that USED TO is used for repeated actions or states in the past. Used to – speaking activity Print and hand out the following worksheets. Ask the students to look at their worksheet and tick the things they used to do when they were younger. 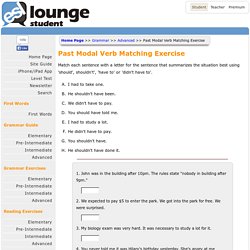 I had to take one. He shouldn't have been. We didn't have to pay. You should have told me. I had to study a lot. The English Learning Lounge - our new iPhone/iPad App. Modal verbs exercises - advanced level. Modal Verb Tutorial. Modals are special verbs which behave very irregularly in English. 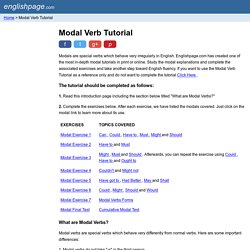