Types of Verbs Study Guide. Types of Verbs Like everything metaphysical the harmony between thought and reality is to be found in the grammar of the language. 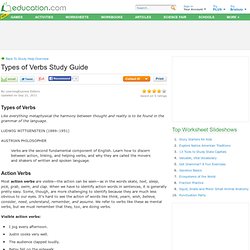 Verbs are the second fundamental component of English. Learn how to discern between action, linking, and helping verbs, and why they are called the movers and shakers of written and spoken language. Action Verbs Most action verbs are visible—the action can be seen—as in the words skate, text, sleep, pick, grab, swim, and clap. Visible action verbs: I jog every afternoon. What is a Linking Verb? - Schools Question Time - Schools Question Time.

What is a Linking Verb? 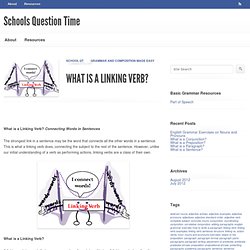 Connecting Words in Sentences The strongest link in a sentence may be the word that connects all the other words in a sentence. What Is a Verb? What is a verb? 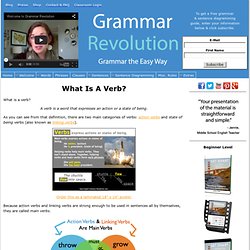 A verb is a word that expresses an action or a state of being. As you can see from that definition, there are two main categories of verbs: action verbs and state of being verbs (also known as linking verbs). Order this as a laminated 18" x 24" poster. Because action verbs and linking verbs are strong enough to be used in sentences all by themselves, they are called main verbs. I love cheese. I am a teacher. But wait! Click here to see a list of all 24 helping verbs and to hear the helping verbs song!

The reason that these guys don't get any of the fame that action and linking verbs get is because they don't stand alone as main verbs. Linking Verbs Worksheet. Linking Verb Worksheets Name Linking Verbs. Diagramming Verb Types - Part 2. Over the past six chapters, you've learned how to diagram two of the four verb types: 1. 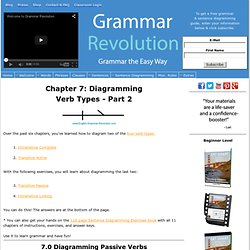 Intransitive Complete 2. Transitive Active With the following exercises, you will learn about diagramming the last two: 3. Transitive Passive 4. You can do this! * You can also get your hands on the 120-page Sentence Diagramming Exercises book with all 11 chapters of instructions, exercises, and answer keys. Use it to learn grammar and have fun! Your Mini Lesson on Passive Verbs. Linking verb - definition and examples of linking verbs. Linking Verbs. Linking verbs are verbs that do not show action; instead, the linking verb renames or describes the subject. 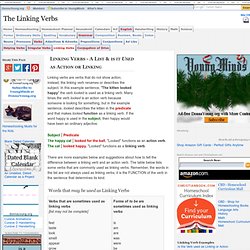 In this example sentence, "The kitten looked happy" the verb looked is used as a linking verb. Many times the verb looked is an action verb because someone is looking for something, but in the example sentence, looked describes the kitten in the predicate and that makes looked function as a linking verb. If the word happy is used in the subject, then happy would have been an ordinary adjective. Subject | PredicateThe happy cat | looked for the ball. "Looked" functions as an action verb. There are more examples below and suggestions about how to tell the difference between a linking verb and an action verb. Words that may be used as Linking Verbs Verbs that are sometimes used as linking verbs [list may not be complete] feel taste look smell appear grow remain stay turn seem sound become prove Forms of to be are sometimes used as linking verbs is am are was were be being been Examples. Handouts/structurerules.pdf.

Handouts/irregularrules02.pdf. The Verb. The Linking Verb. Linking verbs do not express action. 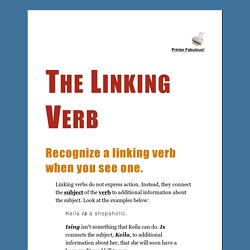 Instead, they connect the subject of the verb to additional information about the subject. Look at the examples below: Keila is a shopaholic. Ising isn't something that Keila can do. Is connects the subject, Keila, to additional information about her, that she will soon have a huge credit card bill to pay. The following verbs are true linking verbs: any form of the verb be [am, is, are, was, were, has been, are being, might have been, etc.], become, and seem. Sylvia tasted the spicy squid eyeball stew. This substitution will not work for appear. Passive Sentences. What is an example of an intransitive verb? In: Entertainment › Literature › Linguistics Anonymous Report Abuse Answers Here are some more examples of intransitive verbs: I slept. 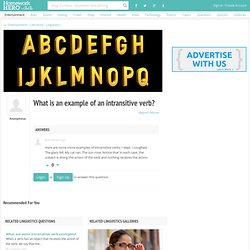 I coughed. The Intransitive Verb.