BBC Bitesize - GCSE English Literature - Sample exam question (Wales) - Revis... To Kill A Mockingbird Folder. To Kill a Mockingbird: Important Quotations Explained. Maycomb was an old town, but it was a tired old town when I first knew it. 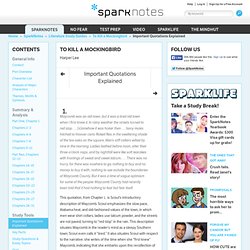 In rainy weather the streets turned to red slop . . . [s]omehow it was hotter then . . . bony mules hitched to Hoover carts flicked flies in the sweltering shade of the live oaks on the square. Men’s stiff collars wilted by nine in the morning. Ladies bathed before noon, after their three-o’clock naps, and by nightfall were like soft teacakes with frostings of sweat and sweet talcum. . . . There was no hurry, for there was nowhere to go, nothing to buy and no money to buy it with, nothing to see outside the boundaries of Maycomb County. This quotation, from Chapter 1, is Scout’s introductory description of Maycomb. “We have nothing to fear but fear itself” is the most famous line from Franklin Delano Roosevelt’s first inaugural speech, made after the 1932 presidential election. 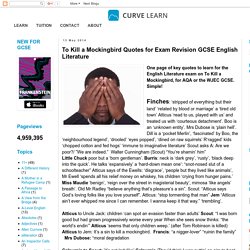 Simple! Finches: ‘stripped of everything but their land’ ‘related by blood or marriage’ a ‘tired old town’ Atticus ‘read to us, played with us’ and treated us with ‘courteous detachment’. Boo is an ‘unknown entity’. Mrs Dubose is ‘plain hell’. Dill is a ‘pocket Merlin’, ‘fascinated’ by Boo, the ‘neighbourhood legend’, ‘drooled’ ‘eyes popped’, ‘dined on raw squirrels’ R‘ragged’ kids ‘chopped cotton and fed hogs’ ‘immune to imaginative literature’ Scout asks A: Are we poor? Detailed Revision Guide. Revision Notes. Search Results. Tokillamockingbird-LitChart. Author Bio Full Name: Nelle Harper Lee Pen Name: Harper Lee Date of Birth: 1926 Place of Birth: Monroeville, Alabama Brief Life Story: The youngest of four children born to Amasa Lee and Frances Finch Lee, Nelle Harper Lee earned a law degree from the University of Alabama in 1949 and spent a year at Oxford in England, but in 1950 moved to New York to focus on writing. 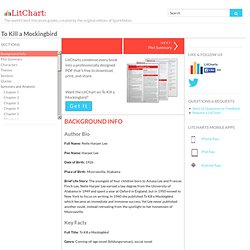 Key Facts Full Title: To Kill a Mockingbird Genre: Coming-of-age novel (bildungsroman); social novel Setting: The fictional town of Maycomb, Alabama during the Great Depression Climax: The trial of Tom Robinson; or when Bob Ewell attacks Scout and Jem Protagonist: Scout Antagonist: Bob Ewell Point of View: First person; Scout is looking back at the events of the novel from some unspecified future time. 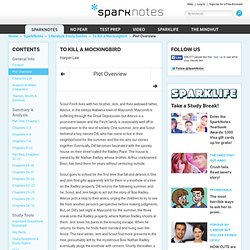 Maycomb is suffering through the Great Depression, but Atticus is a prominent lawyer and the Finch family is reasonably well off in comparison to the rest of society. One summer, Jem and Scout befriend a boy named Dill, who has come to live in their neighborhood for the summer, and the trio acts out stories together. Eventually, Dill becomes fascinated with the spooky house on their street called the Radley Place. The house is owned by Mr. Nathan Radley, whose brother, Arthur (nicknamed Boo), has lived there for years without venturing outside. Scout goes to school for the first time that fall and detests it. To the consternation of Maycomb’s racist white community, Atticus agrees to defend a black man named Tom Robinson, who has been accused of raping a white woman. Atticus’s sister, Alexandra, comes to live with the Finches the next summer.