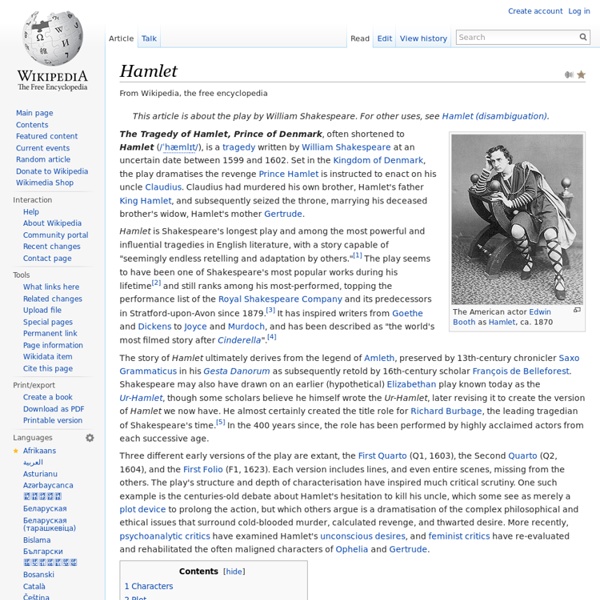 Hamlet is Shakespeare's longest play and among the most powerful and influential tragedies in English literature, with a story capable of "seemingly endless retelling and adaptation by others."[1] The play seems to have been one of Shakespeare's most popular works during his lifetime[2] and still ranks among his most-performed, topping the performance list of the Royal Shakespeare Company and its predecessors in Stratford-upon-Avon since 1879.[3] It has inspired writers from Goethe and Dickens to Joyce and Murdoch, and has been described as "the world's most filmed story after Cinderella".[4] Characters[edit] Plot[edit] The scene shifts to "room of state in the castle." When they leave, he soliloquises that he wishes flesh could melt, and that he was not prevented from "self-slaughter" by "his canon." Claudius and Gertrude send two student friends of his—Rosencrantz and Guildenstern—to discover the cause of Hamlet's mood and behavior. Sources[edit]

Shmoop.com - Hamlet If extraterrestrials were to visit Planet Earth, we'd probably put a copy of Hamlet in their welcome basket. It's that good. Well over 400 years after William Shakespeare wrote the play between 1599 and 1601, readers and audiences are still connecting with it. Shakespeare was a groundbreaking pioneer in his time and wrote plays that were totally different from anything the world had ever seen before. He explored the human spirit and what happens when it is challenged. Hamlet , in particular, has a lot of "most famous" things in it: it's Shakespeare's most famous play about Shakespeare's most famous character (that would be Hamlet), and it contains Shakespeare's most famous line: "To be or not to be, that is the question" (3.1). The play tells the story of Prince Hamlet. If you're Hamlet, not much of anything. Whew. Hamlet is such a complex character that playing him is the actor equivalent of going to the Olympics. Shakespeare didn't come up with this story all on his lonesome.

William Shakespeare William Shakespeare (/ˈʃeɪkspɪər/;[1] 26 April 1564 (baptised) – 23 April 1616)[nb 1] was an English poet, playwright, and actor, widely regarded as the greatest writer in the English language and the world's pre-eminent dramatist.[2] He is often called England's national poet, and the "Bard of Avon".[3][nb 2] His extant works, including collaborations, consist of approximately 38 plays,[nb 3] 154 sonnets, two long narrative poems, and a few other verses, some of uncertain authorship. His plays have been translated into every major living language and are performed more often than those of any other playwright.[4] Shakespeare produced most of his known work between 1589 and 1613.[6][nb 4] His early plays were primarily comedies and histories, which are regarded as some of the best work ever produced in these genres. Many of his plays were published in editions of varying quality and accuracy during his lifetime. Life Early life London and theatrical career Later years and death man Plays