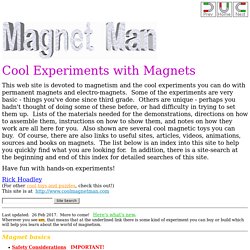 Some of the experiments are very basic - things you've done since third grade. Others are unique - perhaps you hadn't thought of doing some of these before, or had difficulty in trying to set them up. Lists of the materials needed for the demonstrations, directions on how to assemble them, instructions on how to show them, and notes on how they work are all here for you. Also shown are several cool magnetic toys you can buy. Have fun with hands-on experiments! Rick Hoadley(For other cool toys and puzzles, check this out!) Last updated: 26 Feb 2017. . , that means that at the underlined link there is some kind of experiment you can buy or build which will help you learn about the world of magnetism. Safety Considerations IMPORTANT! What is attracted to magnets? Electromagnets What is an electromagnet? Who else has cool stuff on magnets? Basic Electromagnetic Wave Properties - Java Tutorial. Electromagnetic radiation is characterized by a broad range of wavelengths and frequencies, each associated with a specific intensity (or amplitude) and quantity of energy. 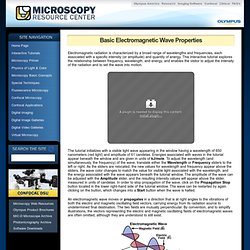 This interactive tutorial explores the relationship between frequency, wavelength, and energy, and enables the visitor to adjust the intensity of the radiation and to set the wave into motion. The tutorial initializes with a visible light wave appearing in the window having a wavelength of 650 nanometers (red light) and amplitude of 61 candelas. Energies associated with waves in the tutorial appear beneath the window and are given in units of kJ/mole. To adjust the wavelength (and simultaneously, the frequency) of the wave, translate either the Wavelength or Frequency sliders to the left or right.

The standard unit for all electromagnetic radiation is the magnitude of the wavelength (in a vacuum), which is usually reported in terms of nanometers for the visible light portion of the spectrum. Ν = c/λ. Magnetic field in a solenoid. Pulse Motors - Electromagnetic Energizing. Here are some of the motors I have worked on in my quest to discover what they call Overunity, and I have become thoroughly convinced of several ways in which it can be done. 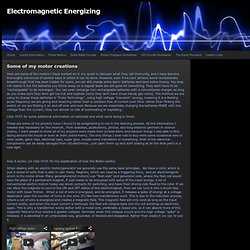 However, even if we cant achieve some revolutionary breakthrough that has been hidden for years, we can still charge some damn batteries and save some money. You may not realize it but the batteries you throw away on a regular basis are still good for something. They dont have to be "rechargeable" to be recharged.. You can even recharge non-rechargeable batteries with a conventional charger, as long as you make sure they dont get too hot and explode (since they dont have those handy gas vents). The method we are using to charge these batteries is "Pulse Technology", using high voltage "transient" energy, meaning it is a fleeting pulse frequency we are giving and receiving rather than a constant flow of current over time. rather than flicking the switch on we are flicking it on and off over and over. 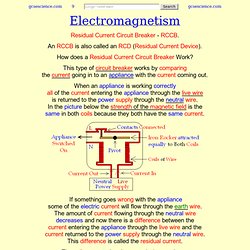 An RCCB is also called an RCD (Residual Current Device). Induction Motor How it works. How a speaker works. Magnetism: Motors and Generators. Electric Bell.