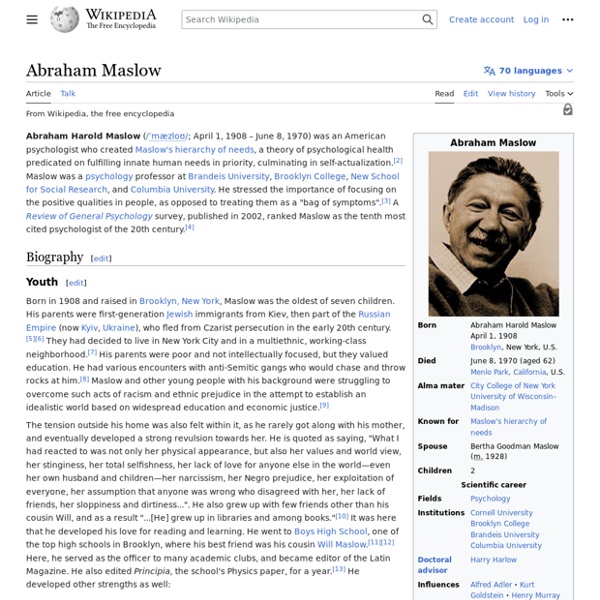 American psychologist Abraham Harold Maslow (; April 1, 1908 – June 8, 1970) was an American psychologist who was best known for creating Maslow's hierarchy of needs, a theory of psychological health predicated on fulfilling innate human needs in priority, culminating in self-actualization.[2] Maslow was a psychology professor at Brandeis University, Brooklyn College, New School for Social Research, and Columbia University. He stressed the importance of focusing on the positive qualities in people, as opposed to treating them as a "bag of symptoms".[3] A Review of General Psychology survey, published in 2002, ranked Maslow as the tenth most cited psychologist of the 20th century.[4] Biography[edit] Youth[edit] College and university[edit] Academic career[edit] He continued his research at Columbia University on similar themes. Death[edit] Maslow's contributions[edit] Humanistic psychology[edit] Most psychologists before him had been concerned with the abnormal and the ill. B-values[edit] [edit]

Baruch Spinoza Biography[edit] Family and community origins[edit] Spinoza's ancestors were of Sephardic Jewish descent, and were a part of the community of Portuguese Jews that had settled in the city of Amsterdam in the wake of the Alhambra Decree in Spain (1492) and the Portuguese Inquisition (1536), which had resulted in forced conversions and expulsions from the Iberian peninsula.[11] Attracted by the Decree of Toleration issued in 1579 by the Union of Utrecht, Portuguese "conversos" first sailed to Amsterdam in 1593 and promptly reconverted to Judaism.[12] In 1598 permission was granted to build a synagogue, and in 1615 an ordinance for the admission and government of the Jews was passed.[13] As a community of exiles, the Portuguese Jews of Amsterdam were highly proud of their identity.[13] Spinoza's father, Miguel (Michael), and his uncle, Manuel, then moved to Amsterdam where they resumed the practice of Judaism. 17th-century Holland[edit] Early life[edit] Expulsion from the Jewish community[edit]

Witold Pilecki Witold Pilecki (13 May 1901 – 25 May 1948; Polish pronunciation: [ˈvitɔlt piˈlɛt͡skʲi]; codenames Roman Jezierski, Tomasz Serafiński, Druh, Witold) was a Polish soldier of the Polish (cavalry officer) during the Second Polish Republic, the founder of the Secret Polish Army (Tajna Armia Polska) resistance group in German-occupied Poland in November 1939 and a member of the underground Home Army (Armia Krajowa), which was formed in February 1942. As the author of Witold's Report, the first intelligence report on Auschwitz concentration camp, Pilecki enabled the Polish government-in-exile to convince the Allies that the Holocaust was taking place. During World War II, he volunteered for a Polish resistance operation to get imprisoned at Auschwitz in order to gather intelligence and escape. Early life[edit] World War II[edit] Auschwitz[edit] Auschwitz concentration camp photos of Pilecki (1941) Outside the camp[edit] Warsaw Uprising[edit] Communist Poland[edit]

John Lydon John Joseph Lydon (born 31 January 1956), also known by his former stage name Johnny Rotten, is an English singer-songwriter and television presenter, best known as the lead singer of punk rock band the Sex Pistols from 1975 until 1978, and again for various revivals during the 1990s and 2000s. He is the lead singer of the post-punk band Public Image Ltd (PiL), which he founded and fronted from 1978 until 1993, and again since 2009. Throughout his career, Lydon has made controversial or dismissive comments about the British Royal Family and other subjects. The band caused nationwide uproar in much of the media, who objected to the content of Lydon’s lyrics, and their antics, which included swearing on live television, in which Steve Jones called Bill Grundy a "fucking rotter". Due to the band's appearance in the media, Lydon was largely seen as the figurehead of the punk movement in the public image[4] although this idea was not widely supported amongst the punk movement itself.

Sergei Yesenin Sergei Alexandrovich Yesenin (sometimes spelled as Esenin; Russian: Серге́й Алекса́ндрович Есе́нин, IPA: [sʲɪrˈgʲej ɐlʲɪkˈsandrəvʲɪtɕ jɪˈsʲenʲɪn]; 3 October [O.S. 21 September] 1895 – 28 December 1925) was a Russian lyrical poet. He was one of the most popular and well-known Russian poets of the 20th century.[1] Biography[edit] Early life[edit] Yesenin's birth house in Konstantinovo Sergey Esenin was born in Konstantinovo in the Ryazan Province (Губерния, Gubernia) of the Russian Empire to a peasant family. In 1912, Esenin moved to Moscow, where he supported himself working as a proofreader in a printing company. Life and career[edit] In 1916, Yesenin published his first book of poems, Radunitsa (Russian: Радуница). From 1916 to 1917, Yesenin was drafted into military duty, but soon after the October Revolution of 1917, Russia exited World War I. In August 1917 Yesenin married for a second time to Zinaida Raikh (later an actress and the wife of Vsevolod Meyerhold). Death[edit] Works[edit]

Slavoj Žižek "Žižek" and "Zizek" redirect here. For the biographical documentary film, see Zizek!. Slavoj Žižek (Slovene pronunciation: [ˈslavoj ˈʒiʒɛk] ( ); born 21 March 1949) is a Slovenian Marxist philosopher, and cultural critic, a senior researcher at the Institute for Sociology and Philosophy, University of Ljubljana, Slovenia, Global Distinguished Professor of German at New York University,[1] and international director of the Birkbeck Institute for the Humanities. He writes widely on a diverse range of topics, including political theory, film theory, cultural studies, theology, and psychoanalysis. Žižek achieved international recognition as a social theorist after the 1989 publication of his first book in English, The Sublime Object of Ideology, which disputed a Marxist interpretation of ideology as false consciousness and argued for ideology as an unconscious fantasy that structures reality. Thought[edit] Ontology, ideology, and the Real[edit] Political thought and the postmodern subject[edit]

John Cooper Clarke John Cooper Clarke (born 25 January 1949) is an English performance poet who first became famous during the punk rock era of the late 1970s when he became known as a "punk poet".[1] He released several albums in the late 1970s and early 1980s, and continues to perform regularly. Career[edit] Performing in Cardiff, 1979 Clarke appeared in a 1982 music documentary compilation Urgh! Clarke released a further album in 1982, Zip Style Method, which was less successful, and Clarke performed his live act less frequently, spending much of the 1980s addicted to heroin, living in a "domestic partnership" with singer and fellow addict Nico.[9][10] He described this period of his life: "It was a feral existence. Clarke was the subject of a BBC Four documentary, Evidently... Filmed in 2010 live from London's South Bank at the Queen Elizabeth II Hall, Clarke's South of the Border DVD is a complete contemporary performance recording. Personal life[edit] Discography[edit] Albums[edit] Compilations