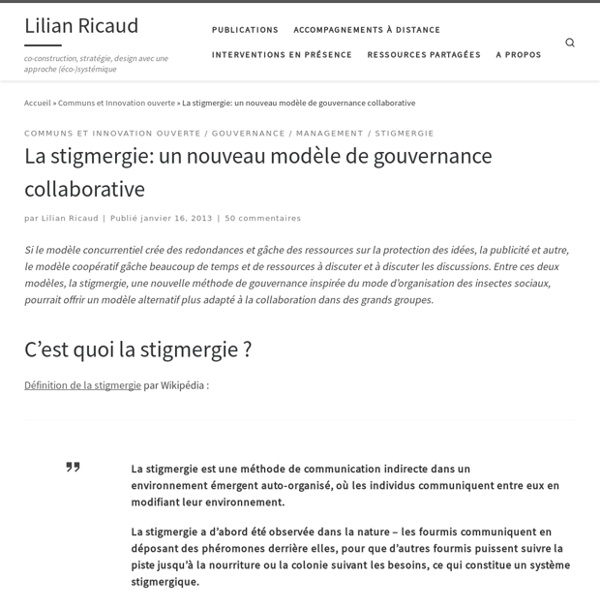 Stigmergic self-organization and the improvisation of Ushahidi Here are some excerpts from Janet’s fascinating paper. In late 2007 in Kenya, US educated Kenyan journalist Ory Okolloh had become one of the main sources of information about the election and the violence that broke out soon after. Because of the government‟s ban on live reporting and censorship of the mainstream media, Okolloh solicited information about incidents of violence from ordinary people in the form of comments posted on her personal blog. The mainstream media was not reporting on the violence because of the government ban, and Okolloh was quickly overwhelmed by the numbers of emails and messages that she received. In order to focus on the “immediate need to get the information out”, in early January Okolloh posted a request on her blog for help to develop a website where people could post anonymously online or via mobile phone text messages, the most accessible type of communications technology in Kenya.

Stigmergy Kind people have stigmergically translated this article into German, French, and Spanish. This article is part of a series now incorporated into : ‘Binding Chaos’. Stigmergy is a mechanism of indirect coordination between agents or actions. The principle is that the trace left in the environment by an action stimulates the performance of a next action, by the same or a different agent. In that way, subsequent actions tend to reinforce and build on each other, leading to the spontaneous emergence of coherent, apparently systematic activity.

The Stigmergic Revolution It was long believed that the queen played a central role in the complex social order of an ant colony, through the exercise of direct command and control over her subjects. Not so. Biologist Pierre-Paul Grasse coined the term “stigmergy” for the anthill’s social organization There is no central coordination, no hierarchy, no administrative mechanism. Each ant’s behavior is entirely spontaneous and self-directed, as it responds independently to the chemical trail markers left by other ants. Mark Elliot, whose doctoral dissertation is probably the best study on the subject to date, applied the term “stigmergy” to any form of human socialization in which coordination is achieved not by social negotiation or administration or consensus, but entirely by independent individual action against the background of a common social medium.

Biological system design From the CD-ROM "Concepts and strategies" by Peter Small Modular route to complexity Acta Astronautica - Stigmergy based behavioural coordination for satellite clusters Abstract Multi-platform swarm/cluster missions are an attractive prospect for improved science return as they provide a natural capability for temporal, spatial and signal separation with further engineering and economic advantages. As spacecraft numbers increase and/or the round-trip communications delay from Earth lengthens, the traditional “remote-control” approach begins to break down. It is therefore essential to push control into space; to make spacecraft more autonomous. An autonomous group of spacecraft requires coordination, but standard terrestrial paradigms such as negotiation, require high levels of inter-spacecraft communication, which is nontrivial in space.

Stigmergic Cognition All things stigmergy Special Issue of Cognitive Systems Research Join the Linkedin Stigmergy group: biologist and computer scientist discover the 'anternet' A collaboration between a Stanford ant biologist and a computer scientist has revealed that the behavior of harvester ants as they forage for food mirrors the protocols that control traffic on the Internet. On the surface, ants and the Internet don't seem to have much in common. But two Stanford researchers have discovered that a species of harvester ants determine how many foragers to send out of the nest in much the same way that Internet protocols discover how much bandwidth is available for the transfer of data.

M/C Journal: "Stigmergic Collaboration: The Evolution of Group Work" Introduction 1The steady rise of Wikipedia.org and the Open Source software movement has been one of the big surprises of the 21st century, threatening stalwarts such as Microsoft and Britannica, while simultaneously offering insights into the emergence of large-scale peer production and the growth of gift economies. 2Many questions arise when confronted with the streamlined efficacy and apparent lack of organisation and motivation of these new global enterprises, not least “how does this work?” Stigmergic collaboration provides a hypothesis as to how the collaborative process could jump from being untenable with numbers above 25 people, towards becoming a new driver in global society with numbers well over 25,000.

A Community for Scientific Information Solving the division of labour problem using and evolved heterogeneity (abstract) (2008) James, E. Noble, J. Watson, R. efficiently. This division of labour through is indeed what is seen to evolve during the simulations. Stigmergy Stigmergy is a mechanism of indirect coordination between agents or actions.[1] The principle is that the trace left in the environment by an action stimulates the performance of a next action, by the same or a different agent. In that way, subsequent actions tend to reinforce and build on each other, leading to the spontaneous emergence of coherent, apparently systematic activity. Stigmergy is a form of self-organization. It produces complex, seemingly intelligent structures, without need for any planning, control, or even direct communication between the agents.

The home of stigmergic systems This site was set up in 2001 to provide a record of the thinking behind the development of stigmergic systems. In 2004, work on new projects was halted in order to re-assess the theory in light of the new thinking coming out of neurological research. Brain imaging techniques were revealing that the functioning of the human brain is totally different from the way it had been envisaged in the twentieth century. The old ideas, based upon systems theory and computer technology, were rapidly being replaced by a far superior theoretical model based upon new concepts of dynamic, complex systems. The implications for information technology are far reaching and it was decided that the next step forward should be to encompass all further work within these new theoretical frameworks.

Novel stigmergy structures in the Internet The vast messaging structure called the Internet harbors many self-organizing multicellular digital structures. More evolve every year. And multitudes of "single cell" devices, PCs, laptops, iPod/Pad/Phones, Android smart phones, and various sensor and effector devices communicate with the many digital stigmergy structures discussed below. Linux source code, for example, can be thought of as a software termite mound, that is, a new kind of digital stigmergy structure. Linux's source code is organized by the “blessed” Concurrent Versions System (CVS) repository that is under the control of the Linux “inner circle” (Linus Torvalds, Alan Cox, etc). Clearly, the Linux CVS code tree is both built by, and helps to organize the efforts of, the worldwide community of Linux programmers.

Stigmergy - the secret of complex organization Cooperation in multicellular systems requires information sharing. Entities such as cells in a multicellular body, social insects in a colony, people in societies, or computers in the Internet do not generally obey commands from some central controller; they share information by indirect and distributed paths. Independent entities deposit long-lived cues in external structures that are subsequently sensed by others.