50 Questions That Will Free Your Mind - StumbleUpon 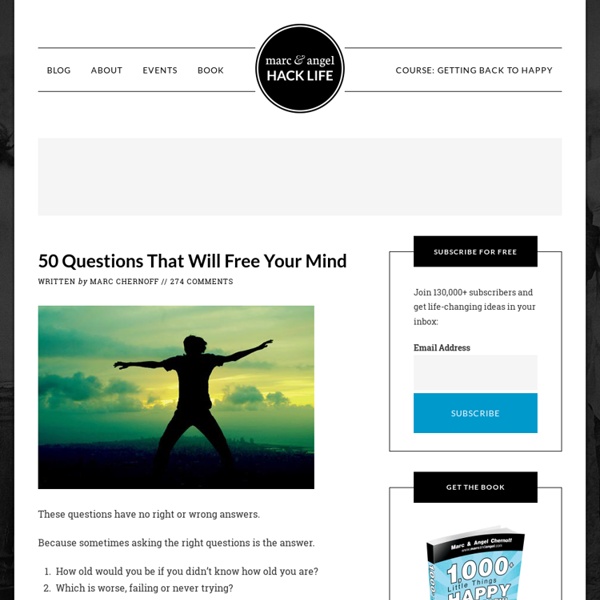 These questions have no right or wrong answers. Because sometimes asking the right questions is the answer. How old would you be if you didn’t know how old you are?Which is worse, failing or never trying?If life is so short, why do we do so many things we don’t like and like so many things we don’t do?When it’s all said and done, will you have said more than you’ve done? Please share your thoughts with us in the comments section below. And check out these books for more thought-provoking questions: Photo by: Sanctuary Related 365 Thought Provoking Questions to Ask Yourself This Year “Asking the right questions is the answer.” March 14, 2011 In "Hacks" 7 Questions You Are Too Scared to Ask It’s not about finding the right answers; it’s about asking the right questions. August 18, 2013 In "Aspirations" 7 Questions to End Your Week With Many of us go through our entire lives as total strangers to ourselves, simply because we never pause long enough for moments of self-inquiry. August 8, 2013

The Benefits of Top-Down Thinking & Why it is Critical to Entrepreneurs For the first 5 years of my career I was a “bottom up” thinker and worker. I assembled tons of data, grouped things, found results and drew conclusions. It was difficult to make the transition to a “top down” thinker but as a senior executive – and as an entrepreneur – you’re far less effective without this skill in your arsenal. You need to be able to structure problems / solutions at the appropriate level to communicate effective and drive decision-making. The difference is in formulating hypothesis then testing conclusions / data vs. assembling data and finding patterns. I know it might sound a bit esoteric so let me explain:

The Philosophy of Neuroscience First published Mon Jun 7, 1999; substantive revision Tue May 25, 2010 Over the past three decades, philosophy of science has grown increasingly “local.” Concerns have switched from general features of scientific practice to concepts, issues, and puzzles specific to particular disciplines. Philosophy of neuroscience is a natural result.

20 Questions You Should Ask Yourself Every Sunday post written by: Marc Chernoff Email At the cusp of new beginnings many of us take time to reflect on our lives by looking back over the past and ahead into the future. We ponder the successes, failures and standout events that are slowly scripting our life’s story. This process of self reflection helps maintain a conscious awareness of where we’ve been and where we intend to go. 28 Powerful Questions for a Happy Life “Keep your head clear. It doesn’t matter how bright the path is if your head is always cloudy.” ~Unknown Letting Go of Attachment, from A to Zen “Most of our troubles are due to our passionate desire for and attachment to things that we misapprehend as enduring entities.” ~Dalai Lama Editor’s note: This is a guest post from Lori Deschene of Tiny Buddha. If there’s one thing we all have in common it’s that we want to feel happy; and on the other side of that coin, we want to avoid hurting.

The Best 10 Motivational Videos For 2013 Once in a while a video comes along that is powerful enough to transcend language barriers and speak directly to our soul. That’s why today I’ve decided to do a list with the motivational videos that had great impact on me and have served me as a motivational source almost on a daily basis. Dream – Mateusz M Key Quote: Most people they raise a family, they earn a living and then they die. They stop growing, they stop working on themselves, they stop stretching, they stop pushing themselves. Occupy Philosophy! Smack in the middle of the holidays, on a Wednesday night in very late December, about 150 people—philosophy professors and graduate students—gathered in a hotel conference room in Washington, DC, for a panel called, “Thinking Occupation: Philosophers Respond to Occupy Wall Street.” The panel had been added, very late in the game, to the program of the 108th Eastern Division American Philosophical Association Meeting. The size of the crowd surprised everyone, particularly since we’d organized things long after the printed conference program for had been sent out to APA members.

~ Welcome to the age of information =-) by epicmind Dec 3