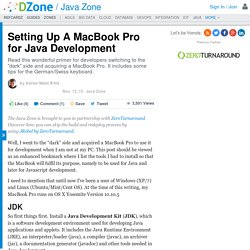 This post should be viewed as an enhanced bookmark where I list the tools I had to install so that the MacBook will fulfil its purpose, namely to be used for Java and later for Javascript development. I need to mention that until now I’ve been a user of Windows (XP/7) and Linux (Ubuntu/Mint/Cent OS). At the time of this writing, my MacBook Pro runs on OS X Yosemite Version 10.10.5 So first things first. Mpenet/jet. Annotations in Java. Discover how AppDynamics steps in to upgrade your performance game and prevent your enterprise from these top 10 Java performance problems, brought to you in partnership with AppDynamics. 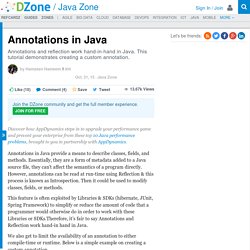 Seven tips to becoming a Java developer Zen master. Putting aside his Diabolical Developer identity and appearing as Zen master, Martijn Verburg laid out dos and don'ts for Java developers in parables at JavaOne 2015 in San Francisco. 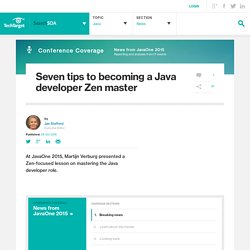 He even dressed the part, in traditional Zen black pants, and shirt and sandals. Verburg, CEO at jClarity Ltd. -- a London-based seller of app performance diagnostic services -- adapted the session, with permission, from the writings of Qi the Scribe on The Codeless Code site, which presents illustrated fables, or Zen koans, on the art and philosophy of software development. In each fable Verburg told, a Zen software master teaches his students, or monks, the core elements of software development.

Most often, the monks learn their lessons the hard way. The Four Month Bug: JVM statistics cause garbage collection pauses (evanjones.ca) [ 2015-March-24 16:56 ] TL;DR: The JVM by default exports statistics by mmap-ing a file in /tmp (hsperfdata). 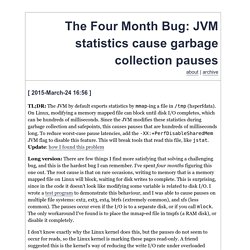 On Linux, modifying a memory mapped file can block until disk I/O completes, which can be hundreds of milliseconds. Since the JVM modifies these statistics during garbage collection and safepoints, this causes pauses that are hundreds of milliseconds long. Let’s Get to the Rapids: Java 8 Stream Performance. Multithreading and Concurrency Interview Questions and Answers – The ULTIMATE List (PDF Download) EDITORIAL NOTE: Concurrency is always a challenge for developers and writing concurrent programs can be extremely hard. 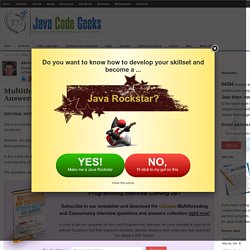 There is a number of things that could potentially blow up and the complexity of systems rises considerably when concurrency is introduced. However, the ability to write robust concurrent programs is a great tool in a developer’s belt and can help build sophisticated, enterprise level applications. In this article we will discuss different types of questions that can be used in a programming interview in order to assess a candidate’s understanding of concurrency and multithreading. The questions are not only Java specific, but revolve around general programming principles. Enjoy! Given email address is already subscribed, thank you! JavaSpecialists.EU: Java Courses & Java Specialists Newsletter. Java Bytecode: Bending the Rules. When a Java program is compiled, it is not translated to executable machine code but rather, the javac compiler yields Java bytecode, which serves as an intermediate format that describes a program to the Java virtual machine. 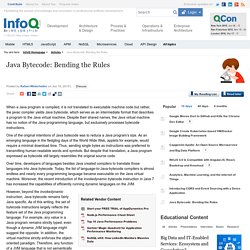 Despite their shared names, the Java virtual machine has no notion of the Java programming language, but exclusively processes bytecode instructions. Tuning Java Garbage Collection for Spark Applications. This is a guest post from our friends in the SSG STO Big Data Technology group at Intel. 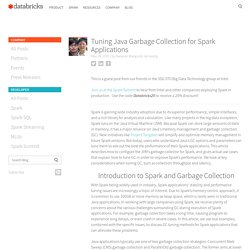 Join us at the Spark Summit to hear from Intel and other companies deploying Spark in production. Use the code Databricks20 to receive a 20% discount! 11 Best Websites for Java Developers. Want to become a Java developer? 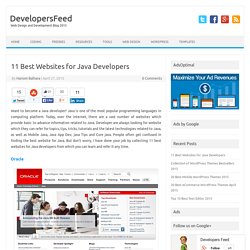 Java is one of the most popular programming languages in computing platform. Today, over the internet, there are a vast number of websites which provide basic to advance information related to Java. Developer are always looking for website which they can refer for topics, tips, tricks, tutorials and the latest technologies related to Java, as well as Mobile Java, Java App Dev, java Tips and Core java. Reduce Boilerplate Code in your Java applications with Project Lombok. One of the most frequently voiced criticisms of the Java programming language is the amount of Boilerplate Code it requires. 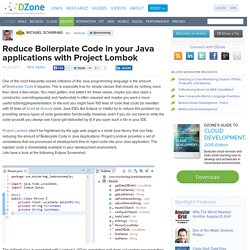 This is especially true for simple classes that should do nothing more than store a few values. You need getters and setters for these values, maybe you also need a constructor, overridingequals() and hashcode() is often required and maybe you want a more useful toString()implementation. In the end you might have 100 lines of code that could be rewritten with 10 lines of Scala or Groovy code. Java IDEs like Eclipse or IntelliJ try to reduce this problem by providing various types of code generation functionality. However, even if you do not have to write the code yourself, you always see it (and get distracted by it) if you open such a file in your IDE.

3 Common SQL Mistakes You are Probably Making as a Java Developer. A regular work week for Java developers might see them coding to develop a scalable web application, creating a dynamic website, developing efficient eCommerce product pages or probably developing an Android app. 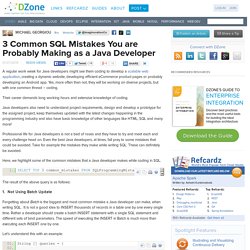 Yes, more often than not, they will be working on diverse projects, but with one common thread – coding. Their career demands long working hours and extensive knowledge of coding. Java developers also need to understand project requirements, design and develop a prototype for the assigned project, keep themselves updated with the latest changes happening in the programming industry and also have basic knowledge of other languages like HTML, SQL and many more! 10 Best Java Tools That Every Java Programmers Should Know. Computer development is all based on a resource called Language. The way we interact, the computer also interacts with us, on the basis of a language. Why Build Your Java Projects with Gradle Rather than Ant or Maven?

For years, builds had the simple requirements of compiling and packaging software. But the landscape of modern software development has changed, and so have the needs for build automation. Today, projects involve large and diverse software stacks, incorporate multiple programming languages, and apply a broad spectrum of testing strategies. With the rise of agile practices, builds must support early integration of code as well as frequent and easy delivery to both test and production environments.

Established build tools regularly fall short in meeting these goals. How many times have your eyes glazed over while looking at XML to figure out how a build works? Gradle is the next evolutionary step in JVM-based build tools. Create Java project with Maven Example. In this tutorial, we will show you an easy way to create a single Java project, using Apache Maven. Also, we will transform our project, in order to be recognizable and supported by the Eclipse IDE.

Finally, we will conclude the tutorial, by presenting how we can package our Java project into an executable “.jar” file. Scala for Java Developers. December 16, 2014Past SessionsComments Off. 7 New Tools Java Developers Should Know. JClarity – Performance Monitoring. Use selector-syntax to find elements: jsoup Java HTML parser. Thoughts on Java: Java Weekly 49: Java doesn't suck, annotations everywhere, free ebooks and more... The Java world is evolving at a rapid pace and it can be challenging to keep track of it. Fortunately lots of great resources are created every week, explaining new features or looking at existing stuff from a different angle. I am using the Java Weekly series to collect the most interesting links I found during the last week and present them to you all in one place. I hope you find it useful and that it makes it easier for you to keep up-to-date. The Java Posse. Planet JDK. The heart of the Java developer community. Java for Everything.

June 1, 2014 I used to ask interviewees, “What’s your favorite programming language?” The answer was nearly always, “I just choose the right language for the job.” Duh. Does anyone ever deliberately pick the wrong language? This was clearly a way to avoid actually naming a language for fear of picking one I didn’t like. If the interviewee gave an answer at all, it was, “I’m most familiar with language X,” which didn’t answer my question either. At the time I would myself have replied something like, “I like Python best because it makes me happy to program in it, but I only use it in such-and-such a situation. DbUtils - JDBC Utility Component. Commons DbUtils: JDBC Utility Component The Commons DbUtils library is a small set of classes designed to make working with JDBC easier. JDBC resource cleanup code is mundane, error prone work so these classes abstract out all of the cleanup tasks from your code leaving you with what you really wanted to do with JDBC in the first place: query and update data.

Some of the advantages of using DbUtils are: No possibility for resource leaks. Correct JDBC coding isn't difficult but it is time-consuming and tedious. Scope of the Package DbUtils is designed to be: Small - you should be able to understand the whole package in a short amount of time. A Simple Use-case Comparison of JVM Libraries for MongoDB.

MongoDB is one of my favorite data stores when it comes to storing document-based JSON data. CFR - yet another java decompiler. Running Multiple JDKs on OSX.