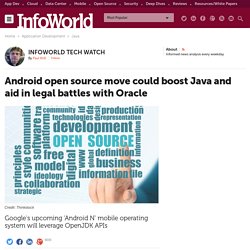 The move has been praised as good for Java overall and might help the company in its ongoing legal battle with Oracle. Oracle has griped that Android violates Java copyrights and patents. OpenJDK provides an accessible open source version of Java. Google's brief statement on the matter, sent to InfoWorld on Monday, makes no mention of any legal issues, however. Java: The once and future king of Internet programming. What is Java to you? 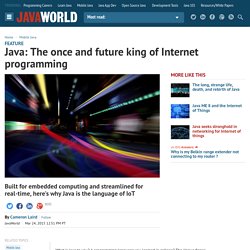 A programming language you learned in college? The lingua franca of corporate IT? Would you believe that Java is poised to dominate the next explosion of the Internet? Little-known real-time standard impacts broad span of Java applications. Oracle vs. Google over Java. Oracle is suing Google over the use of Java in Android and that may change everything about Java and open-source development. 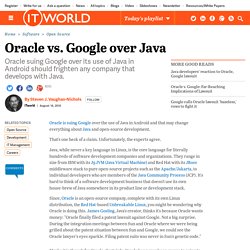 That's one heck of a claim. Unfortunately, the experts agree. Java, while never a key language in Linux, is the core language for literally hundreds of software development companies and organizations. Real time Java. The RTSJ addressed the critical issues by mandating a minimum specification for the threading model (and allowing other models to be plugged into the VM) and by providing for areas of memory that are not subject to garbage collection, along with threads that are not preemptable by the garbage collector. 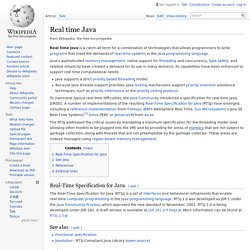 Metronome - IBM. The mission of the Metronome project is to bring the productivity, reliability, security, and portability advantages of modern object-oriented languages like Java to the design and implementation of complex real-time systems. 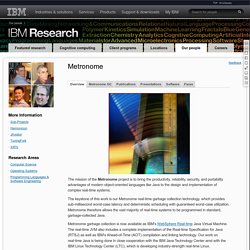 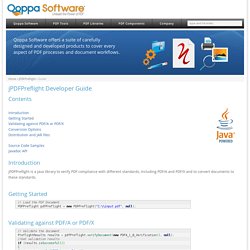 Red Hat Customer Portal. BlueJ not working. I cannot get BlueJ (version 3.1.1) to work on Fedora 20. 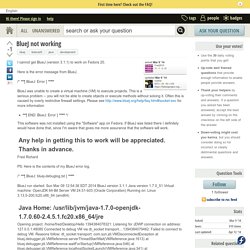 Here is the error message from BlueJ, /* ***[ BlueJ: Error ] ***** BlueJ was unable to create a virtual machine (VM) to execute projects. Where can I find the Java SDK in Linux? Graal (compiler) Graal is an Oracle project aiming to implement a high performance Java dynamic compiler and interpreter.[3][4] The objective of Graal is to improve the performance of Java virtual machine-based languages to match native languages performance.[5] 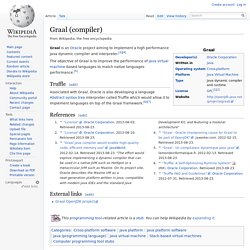 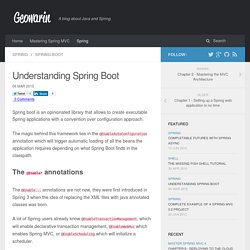 The magic behind this framework lies in the @EnableAutoConfiguration annotation which will trigger automatic loading of all the beans the application requires depending on what Spring Boot finds in the classpath. The @Enable* annotations The @Enable... annotations are not new, they were first introduced in Spring 3 when the idea of replacing the XML files with java annotated classes was born. A lot of Spring users already know @EnableTransactionManagement, which will enable declarative transaction management, @EnableWebMvc which enables Spring MVC, or @EnableScheduling which will initialize a scheduler.

These annotations are in fact a simple configuration import with the @Import annotation. When it finds such a file, the SpringFactoriesLoader will look for the property named after our configuration file. Happy second birthday, Java EE 7! How is it going in production? Dropwizard. Build Reactive Applications on the JVM. 30 Java Programming Tips and Best Practices for Beginners. Java is one of the most popular programming languages – be it Win applications, Web Applications, Mobile, Network, consumer electronic goods, set top box devices, Java is everywhere. 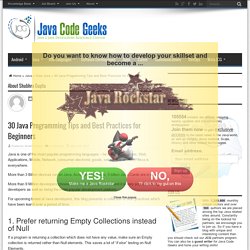 More than 3 Billion devices run on Java. According to Oracle, 5 billion Java Cards are in use. More than 9 Million developers choose to write their code in Java and it is very popular among developers as well as being the most popular development platform. For upcoming breed of Java developers, this blog presents a collection of best practices which have been learnt over a period of time: 1. If a program is returning a collection which does not have any value, make sure an Empty collection is returned rather than Null elements. 2. If two Strings are concatenated using “+” operator in a “for” loop, then it creates a new String Object, every time. 3. JEP 110: HTTP/2 Client. Summary Define a new HTTP client API that implements HTTP/2 and WebSocket, and can replace the legacy HttpURLConnection API.

Motivation The existing HttpURLConnection API and its implementation have numerous problems: The base URLConnection API was designed with multiple protocols in mind, nearly all of which are now defunct (ftp, gopher, etc.).The API predates HTTP/1.1 and is too abstract.It is hard to use, with many undocumented behaviors.It works in blocking mode only (i.e., one thread per request/response).It is very hard to maintain. Goals Must be easy to use for common cases, including a simple blocking mode.Must provide notification of events such as "headers received", errors, and "response body received". 5 features in Java 9 that WILL change how you develop software (and 2 that won’t) What are the most exciting features that are expected to be released in Java 9? Don’t get distracted by the relative silence lately around Java 9. The JDK committers are hard at work preparing the next release, expected to be feature complete just a few months away on December 2015.

After that, it will go through rigorous tests and bug fixes preparing it for general availability, which is scheduled for September 2016. Today we have a pretty clear picture of the features we can expect in Java 9. If Java 8 could be described as the major release of lambdas, streams and API changes, then Java 9 is all about Jigsaw, extra utilities and changes under the hood. Here some of the features which are an absolute must to know about in Java 9, some of these are already ready for you to tinker with in the early release version. 1. Yes. Java Money and Currency API: Wiki: Home. Latest News The JSR is final.Checkout the umbrella site Introduction This JSR focuses on defining interfaces and classes to be used for currencies and monetary amounts. Generally the following areas are focused: Core This area defines the classes representing currencies and monetary amounts, as well as monetary rounding.

All this areas were implemented in the org.javamoney OSS GItHub project, the common essence finally defined what we have now as JSR 354. Sunflow. OpenViewerFX and NetBeans Plugin Downloads. Must read. We are sharing the best books for learning Java . If you are new to the java world then you should not miss out these books .Most of the readers find it hard to learn java at the beginning.

Lambdaj - manipulate collections in a pseudo-functional and statically typed way.