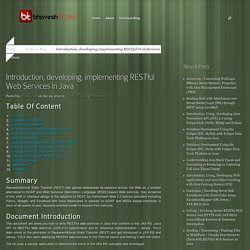 Key evidence of this shift in interface design is the adoption of REST by mainstream Web 2.0 service providers-including Yahoo, Google, and Facebook-who have deprecated or passed on SOAP and WSDL-based interfaces in favor of an easier-to-use, resource-oriented model to expose their services. This document will show you how to write RESTful web services in Java that conform to the JAX-RS: Java API for RESTful Web Services (JSR-311) specification and its reference implementation – Jersey. You’ll learn some of the principles of Representational State Transfer (REST) and get introduced to JAX-RS and Jersey. 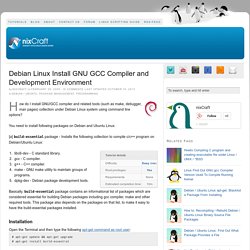 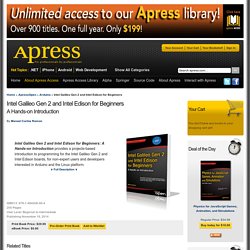 The book’s theory-into-practice approach features learning resources excerpted and refined from the book Intel Galileo and Intel Galileo Gen 2: API Features and Arduino Projects for Linux Programmers, which is geared to more-advanced-level audiences. The book provides an introduction to the Galileo and Edison boards, the APIs, the use of the Arduino IDE, the wiring language and basic networking followed by some application projects to pull it all together. Author Manoel Carlos Ramon is a member of the Intel Galileo development team; his text draw on his practical experience in working on the Galileo project as he shares the team’s findings, problems, fixes, workarounds and techniques with the open source community.

How to install Java runtime on Linux - Ask Xmodulo. Question: I want to run a Java application on my Linux. 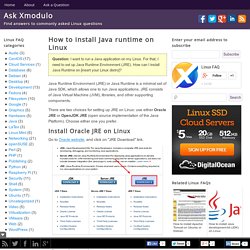 For that, I need to set up Java Runtime Environment (JRE). How can I install Java Runtime on [insert your Linux distro]? Java Runtime Environment (JRE) or Java Runtime is a minimal set of Java SDK, which allows one to run Java applications. JRE consists of Java Virtual Machine (JVM), libraries, and other supporting components. There are two choices for setting up JRE on Linux: use either Oracle JRE or OpenJDK JRE (open source implementation of the Java Platform). Reading Temperature from TMP102 (Temperature Sensor) using Raspberry Pi. The TMP102 temperature sensor breakout from Sparkfun is an easy to use thermometer that connects via I2C. 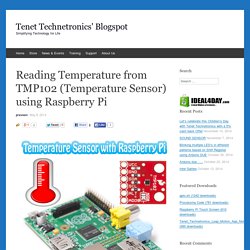 This quick example shows how to use a TMP102 with Raspberry Pi and some simple Python code to get the current temperature. Step 1: Prerequisites Run the following commands to install required packages: Galileo-debian / Wiki / Home. Galileo-debian. Gumstix / Mailing Lists. Some hints on Yocto builds for IoT devkit - example: adding Java JRE. Recently someone asked me on more documentation about Yocto builds. 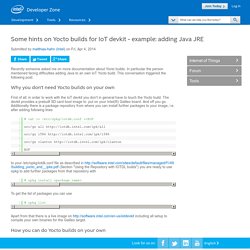 In particular the person mentioned facing difficulties adding Java to an own IoT Yocto build. This conversation triggered the following post: Why you don't need Yocto builds on your own First of all: in order to work with the IoT devkit you don't in general have to touch the Yocto build. The devkit provides a prebuilt SD card boot image to put on your Intel(R) Galileo board. To your /etc/opkg/iotdk.conf file as described in (Section "Using the Repository with IOTDL builds") you are ready to use opkg to add further packages from that repository with To get the list of packages you can use Apart from that there is a live image on including all setup to compile your own binaries for the Galileo target.

How you can do Yocto builds on your own However, there might be cases where the before mentioned ways don't fully fit your needs and you might want to customize the image or easily build own ipk packages ... SD Card Issues — Clay and Galileo. Sergey's Blog - Malinov Family Web Presence. IntelGalileo/HydroGalileoInitialInstall. Intel Galileo initial Yocto image install Description: How to download, build and install the Intel Galileo Linux image. 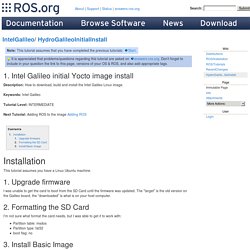 Keywords: Intel Galileo Tutorial Level: INTERMEDIATE Next Tutorial: Adding ROS to the image Adding ROS This tutorial assumes you have a Linux Ubuntu machine. Upgrade firmware I was unable to get the card to boot from the SD Card until the firmware was updated. Formatting the SD Card I'm not sure what format the card needs, but I was able to get it to work with: Partition table: msdos Partition type: fat32 boot flag: no Install Basic Image The first step is to download, build and install the basic image. Mkdir ~/devel_gal cd ~/devel_gal sudo apt-get install p7zip-full git 7z x ~/Downloads/Board_Support_Package_Sources_for_Intel_Quark_v0.7.5.7z tar xzvf Board_Support_Package_Sources_for_Intel_Quark_v0.7.5/meta-clanton_v0.7.5.tar.gz cd meta-clanton_v0.7.5 .

Make a backup copy of the original recipe. cp .. DISTRO ? Comment out the entire .. Edit .. How to Format an SD Card to a Smaller Size.