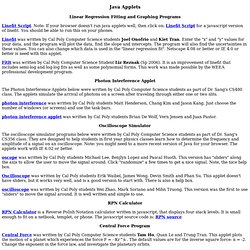 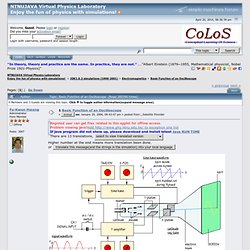 Although the size and shape are different, the operating principle is the same. Inside the tube is a vacuum. The electron beam emitted by the heated cathode at the rear end of the tube is accelerated and focused by one or more anodes, and strikes the front of the tube, producing a bright spot on the phosphorescent screen. The electron beam is bent, or deflected, by voltages applied to two sets of plates fixed in the tube. The horizontal deflection plates, or X-plates produce side to side movement. In this way, the time base generates the X-axis of the V/t graph. * FFTExplorer. FFTExplorer is an advanced, Java-based signal processing workshop meant to introduce a number of advanced and interesting electronic processing methods. 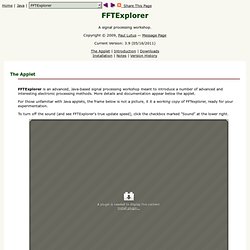 More details and documentation appear below the applet. For those unfamiliar with Java applets, the frame below is not a picture, it it a working copy of FFTexplorer, ready for your experimentation. To turn off the sound (and see FFTExplorer's true update speed), click the checkbox marked "Sound" at the lower right.

FFTExplorer is a free (GPL) cross-platform Java program that performs spectral analysis on real-time data created by its internal synthesizer or from a sound card, and can analyze the spectra of various sound file types (as a Web page applet, only the first of these options is available). Educators Take Note FFTExplorer is designed to maximize its educational potential — it combines a high degree of technical instruction with a game-like interface to balance fun and education. FFTExplorer is available in these forms: Simple Audio Out Oscilloscope and Spectrum Analyzer. Introduction This is a simple application I built to understand the basics of the Windows Audio WAVE API, and to get a basic grasp on Fast Fourier Transforms (FFTs). 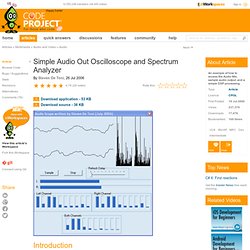 Features of the application are: double buffering graphics, sampling an audio source, selecting an audio recording source using the mixer, calculating the FFT spectrum array, and plotting sampled data. Background I won't discus the details of FFT here as the math is a little beyond me. Basically, it involves complex numbers (those number like sqrt(-1)) and calculating discrete Sin/Cos transformations on sampled date. Using the code If you look through the example, you will find it quite a simple affair that has not been touched by MFC.

Load a dialog window and initialize it. In the FFT process, I load the sampled data into an iterator class for processing within the FFT class. Points of interest The audio device API within Windows is far more complex than it should be. JJack - Java framework for the JACK Audio Connection Kit. JJack is a JACK audio driver for the Java Sound API and a framework for the Java programming language that allows Java applications to use the JACK Audio Connection Kit. 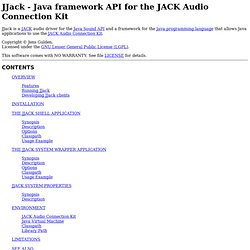 Copyright © Jens Gulden. Licensed under the GNU Lesser General Public License (LGPL). This software comes with NO WARRANTY. See file LICENSE for details. Features. Java Sound API: Java Sound Demo. Capturing Audio with Java Sound API. This Tech Tip reprinted with permission by java.sun.com The Java Sound API has been a part of the standard libraries of the Java 2 Platform since the 1.3 release. 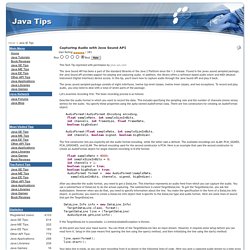