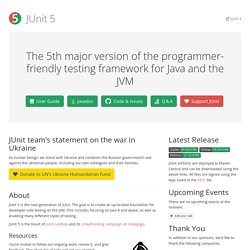 The goal is to create an up-to-date foundation for developer-side testing on the JVM. This includes focusing on Java 8 and above, as well as enabling many different styles of testing. JUnit 5 is the result of JUnit Lambda and its crowdfunding campaign on Indiegogo. Resources You’re invited to follow our ongoing work, review it, and give feedback. We ask you – our users – to support us so we can keep up the pace. Thank you! Backers Stefan Gwihs linux_china Danny Preussler Zerocode Simon Schrottner Zoran Regvart Tokuhiro Matsuno Atsushi Komiya Peter Schuster André Camilo Philip Riecks (rieckpil) Christian Femers Alex K Niklas Seyfarth. Mark Dexter. The tutorial lessons are contained in zip files on the SourceForge project web site. 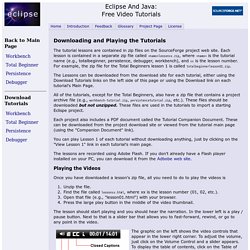 Each lesson is contained in a separate zip file called <name>lessonxx.zip, where <name> is the tutorial name (e.g., totalbeginner, persistence, debugger, workbench), and xx is the lesson number. For example, the zip file for the Total Beginners lesson 1 is called totalbeginnerlesson01.zip. The Lessons can be downloaded from the download site for each tutorial, either using the Download Tutorials links on the left side of this page or using the Download link on each tutorial's Main Page.

All of the tutorials, except for the Total Beginners, also have a zip file that contains a project archive file (e.g., workbench-tutorial.zip, persistencetutorial.zip, etc.). These files should be downloaded but not unzipped. Each project also includes a PDF document called the Tutorial Companion Document. Eclipse IDE Tutorial. Copyright © 2007, 2008, 2009, 2010, 2011, 2012, 2013, 2014, 2015 vogella GmbH Eclipse Java IDE This tutorial describes the usage of Eclipse as a Java IDE. 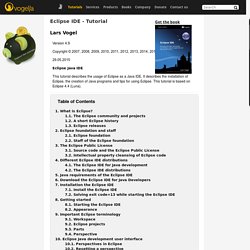 It describes the installation of Eclipse, the creation of Java programs and tips for using Eclipse. Eclipse Tips & Tricks. Advertisements Press Ctrl + Shift + L to open a widget that shows all the shortcut keys. 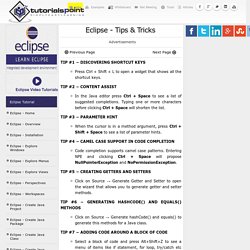 In the Java editor press Ctrl + Space to see a list of suggested completions. Typing one or more characters before clicking Ctrl + Space will shorten the list. When the cursor is in a method argument, press Ctrl + Shift + Space to see a list of parameter hints. Code completion supports camel case patterns. Click on Source → Generate Getter and Setter to open the wizard that allows you to generate getter and setter methods. Click on Source → Generate hashCode() and equals() to generate this methods for a Java class. Select a block of code and press Alt+Shift+Z to see a menu of items like if statement, for loop, try/catch etc that can enclose the selected block of code. 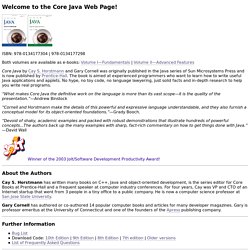 Horstmann and Gary Cornell was originally published in the Java series of Sun Microsystems Press and is now published by Prentice-Hall. The book is aimed at experienced programmers who want to learn how to write useful Java applications and applets. No hype, no toy code, no language lawyering, just solid facts and in-depth research to help you write real programs.

“What makes Core Java the definitive work on the language is more than its vast scope—it is the quality of the presentation.” “Cornell and Horstmann make the details of this powerful and expressive language understandable, and they also furnish a conceptual model for its object-oriented foundations.” Winner of the 2003 Jolt/Software Development Productivity Award! About the Authors Cay S. Gary Cornell has authored or co-authored 14 popular computer books and articles for many developer magazines. Further Information. 50+ Java Interview Questions for Programmers. How to Become a Competent (Java) Developer. How to become a good programmer? 13 tasks you should practice now. Details Written by Nam Ha Minh Last Updated on 02 July 2019 | Print Email Do you want to become a good programmer? 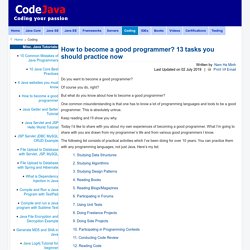 Of course you do, right? But what do you know about how to become a good programmer? IBM developerWorks : Java development : Learn.