How to Crack a Wi-Fi Network's WPA Password with Reaver 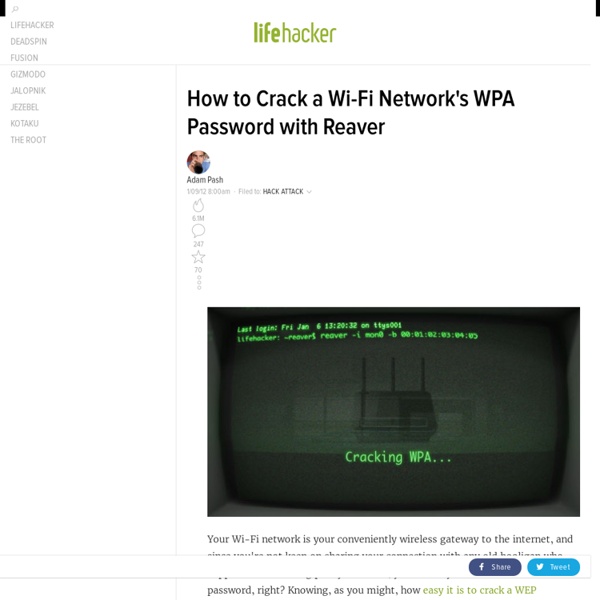 Turning the SSID broadcast off won't do anything to enhance security; if anything, it can actually reduce your security. The reason for this is that when the access point isn't broadcasting the SSID, your wireless device has to initiate the conversation, as opposed to the other way around. This means that if you take your laptop to other locations, it will send out signals asking your home SSID if it's there, which could be recorded by any nearby device that's listening. Well then i must have listened to the wrong security guys lol...Thanks

Wireless Tips – Does Your Wireless Router Keep Disconnecting or Dropping the Connection? I’ve had a Netgear wireless router for about a year now and it’s been pretty good until a couple of weeks back all of sudden my wireless connection kept dropping or I could not connect to the router unless I restarted the router! It was a royal pain in the butt, but because I’m lazy I didn’t get around to fixing it earlier! If you’re in the same situation, here’s what you can do to fix the problem!

The 5 Best Websites To Learn Python Programming Over the past decade, the Python programming language has exploded in popularity amongst programmers in all areas of coding. From web developers to video game designers to in-house tool creators, many people have fallen in love with the language. Why? Because it’s easy to learn, easy to use, and very powerful. If you’re looking to pick up Python, you’re in luck.

Can't Change wlan0 Fixed Channel.... [Archive] VoyezScout December 23rd, 2011, 02:32 PM I had I similar problem as this. Then I learned how to use iwconfig properly. If you learn that then you won't need airmon-ng Network Monitoring Tools Les Cottrell, SLAC. Last Update: December 14, 2015 ESnet | ESCC | PinGER Internet monitoring | Tutorial This is a list of tools used for Network (both LAN and WAN) Monitoring tools and where to find out more about them. The audience is mainly network administrators. You are welcome to provide links to this web page.

100 Websites You Should Know and Use (updated!) Entertainment Meet David Peterson, who developed Dothraki for Game of Thrones There are seven different words in Dothraki for striking another person with a sword. How to gain access to system account the most powerful account in Windows. « Alien Eyes There is an account in Microsoft Windows that is more powerful than the Administrator account in Windows Operating Systems. That account is called System account it is similar to the root OR super user in the Linux/Unix world . I will show you how to access this system account in this article. You can use this facility for removing programs that are causing problems to your system, malware etc. Introduction If you look at the task manager (which can be launched by pressing [CTRL]+[ALT]+[DEL]) you will see some processes that are running with System level privileges.

Pwnie Express Now faster, lighter, and thinner than ever, the Pwn Pad 2014 is a commercial grade penetration testing tablet providing unprecedented ease of use in evaluating wired and wireless networks. The sleek form factor is an ideal choice when on the road or conducting a company or agency walk-through. This high-speed, lightweight device, featuring extended battery life and the world’s sharpest 7” tablet screen, offers pentesters an alternative never known before. Core Features: Hardware specs:

Secure Your Wireless Router In The Short Term By Assigning It An Aggressive Name As more devices ship with wireless networking capabilities, it becomes increasingly important to have routers that are capable of handling connections from hardware such as tablets, laptops and mobile phones. The problem is that many routers still in use are perfectly good pieces of hardware, except for one drawback – they don’t support Wireless-N or offer advanced encryption such as WPA. With the threat of drive-by Wi-Fi theft and the risk of secure data being transferred over a non-secure connection, wireless routers without the most current security options can be temporarily shored up with just a bit of imagination.