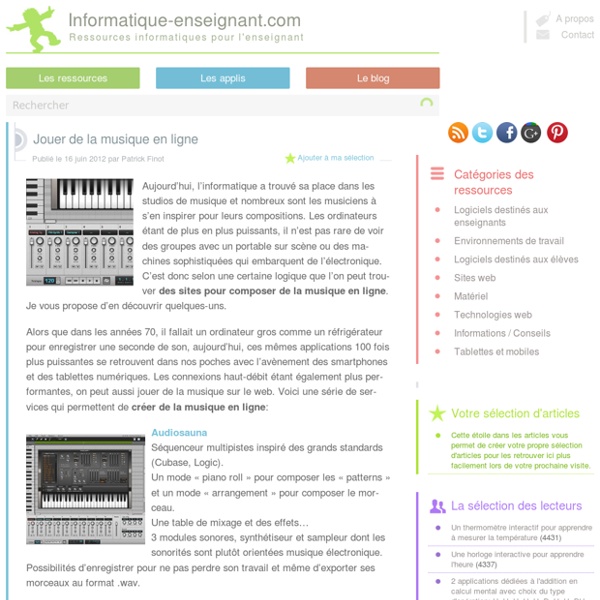 JoyStick Learning Examples | Foundations | Hacking | Links The Joystick Schematic How this works The joystick in the picture is nothing but two potentiometers that allow us to messure the movement of the stick in 2-D. Top DJs of 2014 So, here we are again. Another year gone, another inconceivably vast number of DJ sets played and heard. Another 650,000 words (or thereabouts) from us on who and what we think is cool, and now, with our annual DJ poll, another chance for you, our readers, to join the conversation. Perusing the results, you may be struck by a particular thought: almost every person on this list is huge. It's not like the heat tapers off near the bottom—hell, number 100 is a living legend. Tutos Max For Live (M4L) [EN] Voilà une belle trouvaille pour les connaisseurs de Max/Msp spécialement integré à Ableton sous le produit Max for Live. cette extension permet d’ utiliser Max MSP dans un environnement Ableton, les possibilités sont infinies: création de nouveaux instruments virtuels, effets audio, fuision Live / contrôleurs harware. c’est tout simplement énorme… Démarrage: [vimeo:x5a0wikz] is a sneak peak into Max4Live. This will show you a basic intro into what you will see in the M4L environment. [vimeo:x5a0wikz] tutorial begins to teach the concepts in Max that are needed to program in Max/MSP/Jitter and Max For Live.

The Rational Keyboard The Rational Keyboard is a browser app to play with harmony on the rational number line. Imagine a piano with infinitely many keys, one for each rational number, and the keys move around and resize based on what sounds good, using some really cool math. Audio is synthesized in background Web Workers and played with HTML5 Audio objects, and the interactive visualizations use a 2D HTML5 Canvas.

SPAMM 1.2: l'art digital devient une expérience IRL ce soir à Paris NAME: SuPer Art Modern Movement 1.2 AUTHOR: SPAMM in collaboration with SLIDERS_lab, ARTE and the parisian media art fair SHOW OFF. DESCRIPTION: Following a first edition last year, spamm.arte.tv, the virtual museum/online gallery/organic TV created by SPAMM and ARTE Creative to showcase the creativity of an emerging generation of digital artists is back this fall. Entitled “Data Drape”, the version 1.2 of the show consists in 15 digital artworks handpicked by French artist Reynald Drouhin. 20 Albums To Begin A Journey into Jazz This is for you if you want to a journey into listening to jazz more seriously, or if a friend asks you what jazz records they should listen to in order to appreciate it more fully. It's no good people starting to listen to jazz on the margins; it's like giving a ten year old, Tolstoy's 'War & Peace' to read, chances are they will not make it past the first page. There are some jazz fans that can be awfully snooty about the music they love, they almost try to turn it into a club that refuses to let in new members. So we decided to put together a list of the 20 albums to start your collection with. Every one is a brilliant record and no discerning jazz fan would turn their nose up at any one of them.

The Infinite Drum Machine Built by Kyle McDonald, Manny Tan, Yotam Mann, and friends at Google Creative Lab. Thanks the The Philharmonia Orchestra, London for contributing some sounds to this project. The open-source code is available here. Check out more at A.I. mollysoda.tumblr.com (Source: unomoralez, via whatsurdadlike) artwerk6666: bebe A electronic and hip hop music blog featuring only sick songs Posted in Bangin, Chill by nick | Tags: Chill House, Deep House, House, Mr Probz, Music Video, Robin Schulz German-based producer / DJ Robin Schulz is making noise thanks to a collection of viral tracks that have seen some international success. He's becoming a household name in multiple countries and is spreading fast everywhere else, so we thought it was overdue to do a Robin Schulz catchup post to bring readers up to speed through some of his best remixes and originals, including his new music video and the announcement of his first US tour ever. First we are starting with the release that kicked things off, his remix of "Waves" originally by Dutch soul singer Mr. Probz released late last year. The song hit #1 in too many countries to name and has seen well over 100+ million plays online collectively.

MaKey MaKey PicoBoard Scratch Trumpet I have been programming an electronic trumpet in Scratch. I am using a MaKey MaKey and a PicoBoardfor the hardware side of this project. Here is the Scratch code I devised. The 100 Most Beautiful Songs in the World, According to Reddit A thread in r/AskReddit on Monday posed the question, "What is the most beautiful song you've ever heard?" User McSlurryHole challenged the community: Think to yourself, what is the most beautiful song you have ever heard, im not talking about your favourite song, or the most technical, or something that made you cry, I just want to know the song that made you say "holy shit...

Mental Mapping: Video Game Maps Drawn From Memory Games are interaction with rules. They mimic the scientific method - hypothesis tested to overcome obstacles and achieve goal while operating inside prescribed system of boundaries. Video games provide failure based learning - brief, surmountable, exciting. While failure in school is depressing, in a video game, it's aspirational.