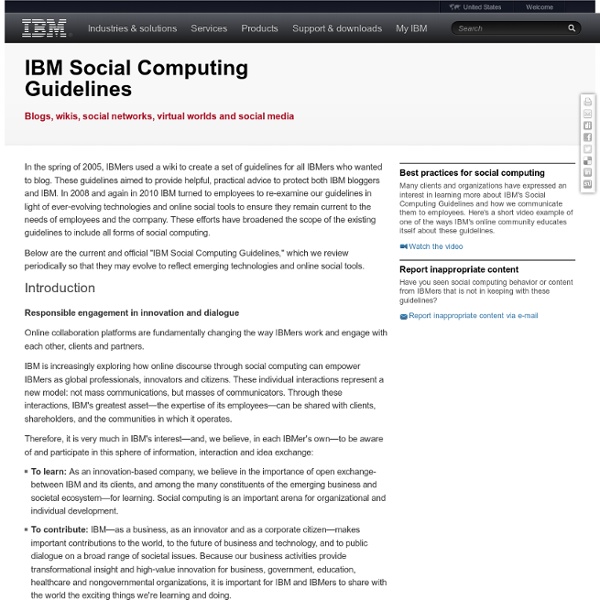 In the spring of 2005, IBMers used a wiki to create a set of guidelines for all IBMers who wanted to blog. These guidelines aimed to provide helpful, practical advice to protect both IBM bloggers and IBM. In 2008 and again in 2010 IBM turned to employees to re-examine our guidelines in light of ever-evolving technologies and online social tools to ensure they remain current to the needs of employees and the company. These efforts have broadened the scope of the existing guidelines to include all forms of social computing. Below are the current and official "IBM Social Computing Guidelines," which we review periodically so that they may evolve to reflect emerging technologies and online social tools. Introduction Responsible engagement in innovation and dialogue Online collaboration platforms are fundamentally changing the way IBMers work and engage with each other, clients and partners. IBM Social Computing Guidelines Detailed discussion IBM supports open dialogue and the exchange of ideas.

Smithsonian Records Management Email Preservation Parser The Email Preservation Parser is available for download and use. We hope that as archivists and other users work with the parser, additional enhancements and functionality will be developed, incorporated, and shared by its user community. Therefore, we offer it with open source software and documentation licenses. The parser is designed to be used on email accounts, or groups of related email messages, that are transferred to an archival organization in accession in contrast to email records that are harvested incrementally from active email systems. The application runs on the open source Smalltalk Squeak virtual machine environment that works on Windows, Macintosh, and other operating systems.

Cisco’s Internet Postings Policy - The Platform With the rise of new media and next generation communications tools, the way in which Cisco employees can communicate internally and externally continues to evolve. While this creates new opportunities for communication and collaboration, it also creates new responsibilities for Cisco employees. This Internet Postings Policy applies to employees who use the following: Multi-media and social networking websites such as MySpace, Facebook, Yahoo! Groups and YouTube Blogs (Both Cisco Blogs and Blogs external to Cisco) Wikis such as Wikipedia and any other site where text can be posted

Artificial reality Artificial reality was the term Myron W. Krueger used to describe his interactive immersive environments, based on video recognition techniques, that put a user in full, unencumbered contact with the digital world. He started this work in the late 1960s and is considered to be a key figure in the early innovation of virtual reality.

Teens are officially over Facebook (Paul Walsh/Flickr) Since children are the future, and no one over 21 really knows what they find “cool” (do the kids even say cool these days…?), researchers have devoted many, many surveys to the exact quantification of what it is #teens do online. In May 2013, they were fleeing Facebook’s “drama.” A year later, they flocked back to the network like lil’ lost sheep. Now, a pretty dramatic new report out from Piper Jaffray — an investment bank with a sizable research arm — rules that the kids are over Facebook once and for all, having fled Mark Zuckerberg’s parent-flooded shores for the more forgiving embraces of Twitter and Instagram. blogs: HP Blogging Code of Conduct HP blogs are written by a variety of employees at different levels and positions in the company, so you can expect many viewpoints. You can also expect the following: We will strive to have open and honest dialogues with our readers.

Mind Uploading: Artificial Reality Most people seem to assume that if you've scanned someone's mind into a computer, the natural thing to do is make an environment in the computer for the patient to live in. Though this is sometimes called "virtual reality," I prefer to use "artificial reality" to avoid confusion with the current generation of immersion-interface for us biological (non-uploaded) folks. Artificial realities would probably come in varying degrees of realism -- to duplicate the patient's familiar world, you'd have to calculate wind currents, light reflections, gravity, friction, and so on, as well as the effect all of these have on the senses. Then you'd have to interpret activity in the motor neurons of the simulated nervous system, to update the patient's simulated body position.

Head Mounted Displays/VR-Helmets Market Overview maintained byChristoph Bungert description of the abbreviations used in the chart 180k-pixel that's what most (consumer) HMDs offer!Are you happy with that? I guess not! The resolution of a HMD might be less impressing than the specs indicate at first.