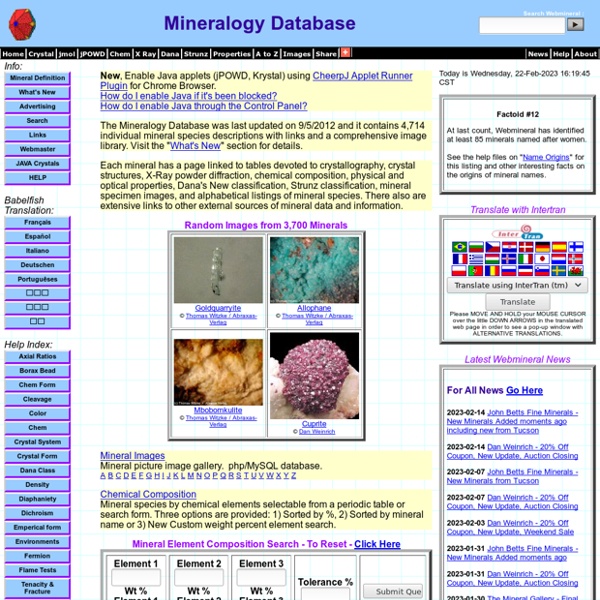 Crystal Lattice Structures This page offers a concise index of common crystal lattice structures. A graphical representation as well as useful information about the lattices can be obtained by clicking on the desired structure below. This page currently contains links to 286 structures in 98 of the 230 space groups. Structures indexed by: References used in creating these pages. Programs used in creating these pages. Other sources of information about crystal lattices can be found at various sites around the Web. NRL policy prohibits mention of the creators of this page. Questions, comments, additions, and corrections are welcome, (Privacy Advisory) but first please read the FAQ. Return to the Code 6390 Home Page. Biomineralization Glomerula piloseta (Sabellidae), longitudinal section of the tube, aragonitic spherulitic prismatic structure IUPAC definition Mineralization caused by cell-mediated phenomena.[1][a] Biomineralization is the process by which living organisms produce minerals, [2]often to harden or stiffen existing tissues. In terms of taxonomic distribution, the most common biominerals are the phosphate and carbonate salts of calcium that are used in conjunction with organic polymers such as collagen and chitin to give structural support to bones and shells.[6] The structures of these biocomposite materials are highly controlled from the nanometer to the macroscopic level, resulting in complex architectures that provide multifunctional properties. Biological roles[edit] Biominerals perform a variety of roles in organisms, the most important being support, defense and feeding.[9] Biology[edit] Shell formation in molluscs[edit] Chemistry[edit] Evolution[edit] Astrobiology[edit] Potential applications[edit] [edit]

Royal Society of Chemistry | Advancing the Chemical Sciences vasp documentation The VASP Manual The online VASP manual is a lengthy document generated with latex2html. If you're one of those die-hards that like real paper you might prefer to get a pdf copy of the manual. Recently, we started a wiki, that in future will replace the online manual completely. VASP Workshop Lectures In 2003 we organized a VASP workshop. More recently the CSC-IT Center for Science Ltd. in Espoo, Finland, organized two VASP workshops (2006/2009). Technical Support Technical support is offered as a courtesy only (not as a contractual service). WWW-MINCRYST - CRYSTALLOGRAPHIC DATABASE FOR MINERALS Crystallographic and Crystallochemical Database for Minerals and their Structural Analogues Institute of Experimental Mineralogy Russian Academy of Sciences This project is supported by the Russian Foundation of Basic Research(grants: 15-07-08399, 12-07-00742-a, 07-07-00121-a; 04-07-90196, 01-07-90052, 96-07-89162) Including Cards with Unique Mineral names 4472 Java3D-applets CRYSTPIC-2005 and MIXIPOL-2006 are available ! NEW: How to adjust Java settings for successful work of applets 'WWW-Crystpic' and 'WWW-Mixipol' - here ATTENTION: (at April 2017) Unfortunately, at some point the latest versions of IE (for Win10), Firefox (> 50), Chrome refused to run Java applets WWW-CRYSTPIC and WWW-MixiPol even with the above-described Security settings.

Alum (douple sulfate) Bulk alum Chemical properties[edit] Uses[edit] Industrial uses[edit] Alum has been used at least since Roman times for purification of drinking water[2] and industrial process water. Cosmetic[edit] Alum in block form (usually potassium alum) can be used as a blood coagulant.[5]Styptic pencils containing aluminium sulfate or potassium aluminium sulfate are used as astringents to prevent bleeding from small shaving cuts.Alum may be used in depilatory waxes used for the removal of body hair or applied to freshly waxed skin as a soothing agent.In the 1950s, men sporting crewcut or flattop hairstyles sometimes applied alum to their hair as an alternative to pomade[citation needed]. Culinary[edit] Flame retardant[edit] Solutions containing alum may be used to treat cloth, wood, and paper materials to increase their resistance to fire.Alum is also used in fire extinguishers to smother chemical and oil fires. Chemical flocculant[edit] Taxidermy[edit] Medicine[edit] Art[edit] History[edit] After M.H.

The Elements Revealed: An Interactive Periodic Table In the October 2011 issue of Scientific American, we celebrate the International Year of Chemistry. Learn more about its impact on our daily lives in our Special Report. UPDATED: 06/18/2013 In honor of the 2013 Lindau meeting, which focuses on chemistry, we have updated our interactive periodic table with links to Nature Chemistry's In Your Element essay series. Each essay tells the story of a particular element, often describing its discovery, history and eventual uses. Main Sources & More to Explore: The Poisoner’s Handbook: Murder and the Birth of Forensic Medicine in Jazz Age New York. Interactive by Krista Fuentes Davide Castelvecchi Davide Castelvecchi is a freelance science writer based in Rome and a contributing editor for Scientific American magazine.

Scripts - Vasp Tools - Chem & Biochem - UT Austin This script sums up the atomic projected DOS over some group of atoms, and then calculates the center of the specific band using a weighted average. The default is set to calcualted the center for the whole band. However, it can also consider DOS within a user specified range by using the optional "w=" or "e=" flag. By using "e=emin,emax" flag, only the states in ranger [emin,emax] are considered. By using "w=" flag, the script finds a half width for the band at half the max height and, based on the number following w= , calculates a weighted average within the limits of that many half widths at half height from the center. If no orbital flag is specified, the script analyzes the d-band. Note: the split_dos.ksh script should be run first to get the resulting new files labeled as DOS1, DOS2, ..., DOSN,where N is the number of atoms in the unit cell.

Downloading pdb-files Below are a number of coordinate, forcefield and topology files that can be freely downloaded and used. The coordinate files are in .pdb format and can be visualized with most molecular graphics programs. The forcefield and topology files are probably only useful together with the Gromacs set of molecular dynamics programs. In case anyone wonders what good alamethicin files are: for many smaller membrane proteins they make useful starting structures. I'm interested in hearing about other sites that have phospholipid coordinates. NOTE: 3 carbons in dppc.itp had the wrong mass (off by 1 hydrogen mass) and 1 bond was too short (double instead of single bond). NOTE: names in pope.pdb suggested they were popc lipids.

Soil Soil is the mixture of minerals, organic matter, gases, liquids and a myriad of micro- and macro- organisms that can support plant life. It is a natural body that exists as part of the pedosphere and it performs four important functions: it is a medium for plant growth; it is a means of water storage, supply and purification; it is a modifier of the atmosphere; and it is a habitat for organisms that take part in decomposition and creation of a habitat for other organisms. Soil is considered the "skin of the earth" with interfaces between the lithosphere, hydrosphere, atmosphere, and biosphere.[1] Soil consists of a solid phase (minerals & organic matter) as well as a porous phase that holds gases and water.[2][3][4] Accordingly, soils are often treated as a three-state system.[5] Overview[edit] Soil is a major component of the Earth's ecosystem. Soils can effectively remove impurities, kill disease agents, and degrade contaminants. History of the study of soil[edit] In 1856 J. Curtis F.