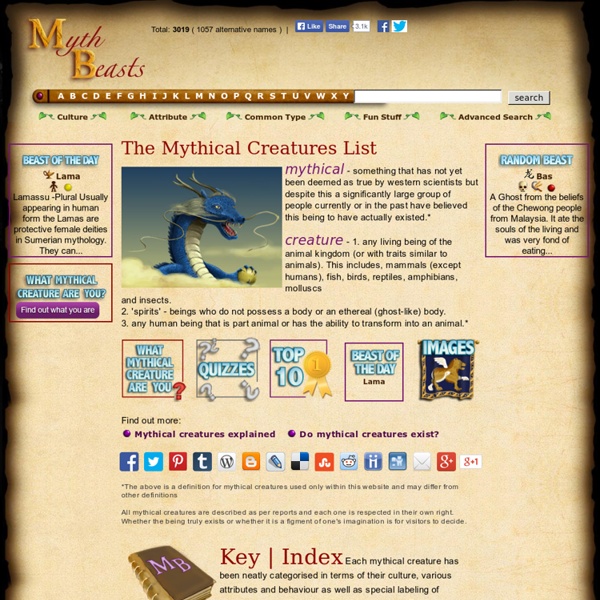 mythical - something that has not yet been deemed as true by western scientists but despite this a significantly large group of people currently or in the past have believed this being to have actually existed.* creature - 1. any living being of the animal kingdom (or with traits similar to animals). This includes, mammals (except humans), fish, birds, reptiles, amphibians, molluscsand insects. 2. 'spirits' - beings who do not possess a body or an ethereal (ghost-like) body. 3. any human being that is part animal or has the ability to transform into an animal

SF Citations for OED This site is maintained by Jesse Sheidlower, Editor at Large of the Oxford English Dictionary. The content side of things is handled by Jeff Prucher and Malcolm Farmer. The project grew out of regular work that was being done for the OED's reading programs. Medieval Names Archive This collection of articles on medieval and Renaissance names is intended to help historical re-creators to choose authentic names. These articles were gathered from various places, and some of them appear elsewhere. In all cases, the copyright on each article belongs to its authors. For frequent users, we offer a compact index; but please read the following introduction at least once. What's New Choosing a Medieval Name

A Book of Myths/Lorelei In every land, North and South, East and West, from sea to sea, myth and legend hand down to us as cruel and malignant creatures, who ceaselessly seek to slay man's body and to destroy his soul, the half-human children of the restless sea and of the fiercely running streams. In Scotland and in Australia, in every part of Europe, we have tales of horrible formless things which frequent lonely rivers and lochs and marshes, and to meet which must mean Death. And equal in malignity with them, and infinitely more dangerous, are the beautiful beings who would seem to claim descent from Lilith, the soulless wife of Adam. Such were the sirens who would have compassed the destruction of Odysseus. Take typing lessons, test your typing speed and practice typing for free! This is keybr.com, a web application that will help you teach touch typing. Touch typing is typing without using the sense of sight to find the keys. A person possessing touch typing skills will know their location on the keyboard through muscle memory. It can improve any individual's typing speed and accuracy dramatically.

8 Cheat Sheet Wallpapers for Designers and Developers Web designers and developers have a lot to remember, from keyboard shortcuts to function names. That’s why it’s handy to have cheat sheets near by for a quick reference. Most people like to print out there cheat sheets on paper and have them sitting on their desk, but another convenient place for a cheat sheet is right on your computers desktop in the form of a wallpaper. Here we’ve rounded up a few very useful cheat sheets for web designers and developers that can be used as desktop wallpapers. Photoshop Keyboard Shortcuts Dad challenging DVLA over right to wear 'religious headgear' in driving licence photo - a colander A madcap dad is challenging the DVLA who have told him to remove his "religious headgear" from his driving licence photo - because it's a colander. Eccentric Ian Harris, 51, is a member of the Church of the Flying Spaghetti Monster whose followers are known as Pastafarians and revere the pasta strainer as a religious garment. Ian, of Brighton, East Sussex, is fighting for his "right" to wear the metal bowl in his licence photo, which he says is equivalent to Muslim women being pictured in hijabs. How to boost your wifi connection with a simple kitchen colander

Check out my cool home design on Autodesk Homestyler! © 2013 Autodesk, Inc. All rights reserved. Use of the service is subject to the Homestyler Terms of Use.