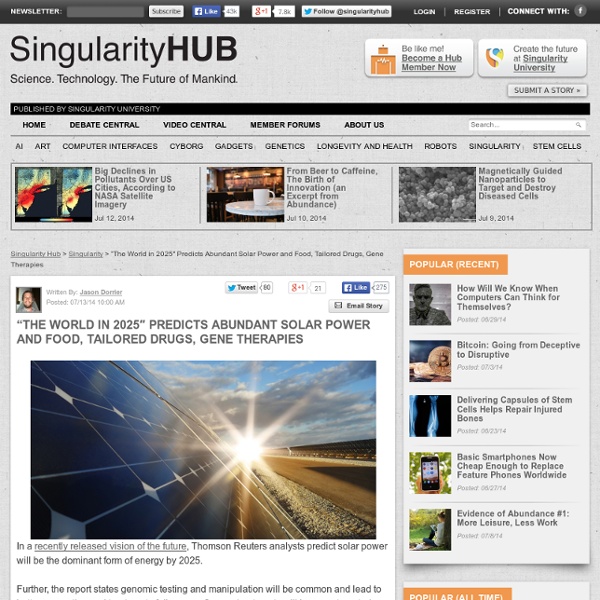 In a recently released vision of the future, Thomson Reuters analysts predict solar power will be the dominant form of energy by 2025. Further, the report states genomic testing and manipulation will be common and lead to better prevention and treatment of diseases. Cancer treatments will be more targeted and less toxic. The world’s infrastructure will be smart, connected, and responsive to our needs. The report is an extrapolation of today’s emerging technologies. Of course, predicting the future is a tricky business. We tend to expect too much or too little of known technologies and get blindsided by unforeseen developments. How will this list hold up? Additionally, while we agree that more tailored drugs and genetic treatments will likely become the norm, it seems slightly premature to include the testing of quantum teleportation on the list. Without further ado, however, the list. Image Credit: Shutterstock.com; CERN Related:  Renewable Energy

Scientists Create Transparent Solar Concentrator One of the biggest complaints about solar energy is that the setups aren’t very attractive. A team of material engineers at Michigan State University have developed solar concentrators that are completely transparent, which means they can be used on windows without disturbing the view or even on smartphone screens. The research was led by Richard Lunt and the paper was featured on the cover of the journal Advanced Optical Materials. Solar concentrators are used to lens sunlight, focusing it on a small area to maximize the amount of light, maximizing the amount of electricity generated. This is similar to using a magnifying glass to set leaves on fire. "No one wants to sit behind colored glass," Lunt said in a press release. The secret to their success was developing a system that could operate at wavelengths outside of the visible spectrum. This technology is still new, so there are efficiency concerns that need to be addressed before it can be scaled up.

France decrees new rooftops must be covered in plants or solar panels - Futurism | Futurism Synopsis Rooftops on new buildings built in commercial zones in France must either be partially covered in plants or solar panels, under a law approved on Thursday. Summary Green roofs have an isolating effect, helping reduce the amount of energy needed to heat a building in winter and cool it in summer. They also retain rainwater, thus helping reduce problems with runoff, while favouring biodiversity and giving birds a place to nest in the urban jungle, ecologists say.The law approved by parliament was more limited in scope than initial calls by French environmental activists to make green roofs that cover the entire surface mandatory on all new buildings.

IBM Solar Collector Magnifies Sun By 2000X and Could Provide Power to the Entire Planet - Futurism | Futurism Synopsis A team at IBM recently developed what they call a High Concentration Photo Voltaic Thermal (HCPVT) system that is capable of concentrating the power of 2,000 suns. Summary Each 1cmX1cm chip can convert 200-250 watts, on average, over a typical eight-hour day in a sunny region. In the HCPVT system, instead of heating a building, the 90 degree Celsius water will pass through a porous membrane distillation system where it is then vaporized and desalinated. Such a system could provide 30-40 liters of drinkable water per square meter of receiver area per day, while still generating electricity with a more than 25 percent yield or two kilowatts hours per day.

The New Tesla Home Battery Powered By Solar Will Make Off Grid Living Mainstream One of the brains behind Tesla motors and Paypal, Tesla Motors CEO and entrepreneur Elon Musk has a new invention up his sleeve that will help power homes at low cost, and it will make living off-grid easier than ever. A Florida woman had to stand up to a local judge to continue living off grid when he declared it illegal, but if millions of people start to live more self-sufficiently and sustainably, what will the corrupt judiciary say then? Musk’s new invention is based on Tesla’s lithium-ion battery technology, and the new battery is expected to help the company become a leader in the growing home energy-storage market. “We are going to unveil the Tesla home battery, the consumer battery that would be for use in people’s houses or businesses fairly soon,” Bloomberg quoted Musk as saying. Not only does this mean that people could tell their electric company (and their high bills) good-bye, better lithium-ion storage also means that even solar arrays would work better.

A solar future isn't just likely — it's inevitable I plan to write a great deal about the short-term prospects for clean energy, both economic and political, but I want to begin life here at Vox with an imaginative exercise, a bit of musing about what energy might look like in the future — not 10 or 20 years from now, but 50, 70, even 100 years ahead. Obviously, predicting the far future is a mug's game if you take it too seriously. This post is more about storytelling, a way of seeing the present through a different lens, than pure prognostication. But storytelling is important. Here it is: solar photovoltaic (PV) power is eventually going to dominate global energy. The main reason is pretty simple: solar PV is different from every other source of electricity, in ways that make it uniquely well-suited to 21st-century needs. Solar PV is different from other electricity sources — in one crucial way A worker cleans the panels in a solar power park run by the Costa Rican Electricity Institute (ICE). But not much energy.

Solar power passes 1% global threshold - Futurism Synopsis Solar power now covers more than 1% of global electricity demand. In three countries in Europe – Italy, Germany and Greece – solar PV supplies more than 7% of electricity demand. Summary China is currently the fastest growing market, installing 10.6 GW in 2014, followed by Japan with 9.7 GW and the US with just over 6.5 GW. Cover Charge: New Spray-On Battery Could Convert Any Object into an Electricity Storage Device Perhaps someday you'll need to go to the store because you ran out of cathode paint. A team of researchers has just announced a new paint-on battery design. The technique could change the way batteries are produced and eliminate restrictions on the surfaces used for energy storage. The paint-on battery, like all lithium ion batteries, consists of five layers: a positive current collector, a cathode that attracts positively charged ions, an ion-conducting separator, an anode to attract negative ions, and a negative current collector. For each layer, the challenge was to find a way to mix the electrically conductive material with various polymers to create a paint that could be sprayed onto surfaces. Neelam Singh, a member of the team of materials scientists and chemists from Rice University in Houston and Catholic University of Louvain in Belgium and lead author of the paper, says, "It was really exciting to find out.

Israeli firm developing electricity-generating roads Tiny piezoelectric crystals embedded in the road generate electricity when driven over A group of Israeli engineers have created a system that allows certain types of roads to generate electricity just by driving over them. The Israeli engineers behind the project claim that a 1km stretch of the power-generating asphalt will generate 400kW - enough power to run eight small cars. The system works by embedding tiny piezoelectric crystals into the road. When cars drive over the crystals, they are 'squeezed' and thus generate a small electrical charge. According to the Environmental Transport Association (ETA), if the system was installed on every stretch of British motorway it would generate enough energy to run 34,500 small cars. The system differs to another electricity-generating road we reported earlier, developed by a Californian local.

The Way Humans Get Electricity Is About to Change Forever The renewable-energy boom is here. Trillions of dollars will be invested over the next 25 years, driving some of the most profound changes yet in how humans get their electricity. That's according to a new forecast by Bloomberg New Energy Finance that plots out global power markets to 2040. Here are six massive shifts coming soon to power markets near you: 1. The price of solar power will continue to fall, until it becomes the cheapest form of power in a rapidly expanding number of national markets. Solar power will eventually get so cheap that it will outcompete new fossil-fuel plants and even start to supplant some existing coal and gas plants, potentially stranding billions in fossil-fuel infrastructure. 2. With solar power so cheap, investments will surge. 3. The biggest solar revolution will take place on rooftops. $2.2 Trillion Goes to Rooftops by 2040 4. Yes, the world is inundated with mobile phones, flat screen TVs, and air conditioners. The Beauty of Efficiency 5. 6.

US Energy Use Per $1 Halved Over Last 35 Years Via Improved Energy Efficiency July 14th, 2015 by James Ayre Improvements in energy efficiency (amongst other things) have led to energy intensity (the measure of energy use per dollar of GDP) being halved over the last 35 years, according to a recent report from the nonprofit American Council for an Energy-Efficient Economy (ACEEE). To be more specific, energy intensity has fallen from 12.1 thousand Btus per dollar (back in 1980) to 6.1 thousand Btus per dollar (as of 2014), according to the recent analysis. The report from the ACEEE noted that roughly 60% of the cut in energy intensity was the result of improvements to energy efficiency, and roughly 40% was the result of “major structural changes in the economy.” The savings that accompanied the cut coming from energy efficiency have been estimated as standing at $800 billion (around $2,500 per capita). Energy efficiency has the cheapest “levelized cost of electricity” (LCOE) and is simply common sense. Image Credits: AEEE, Lazard, PERI About the Author