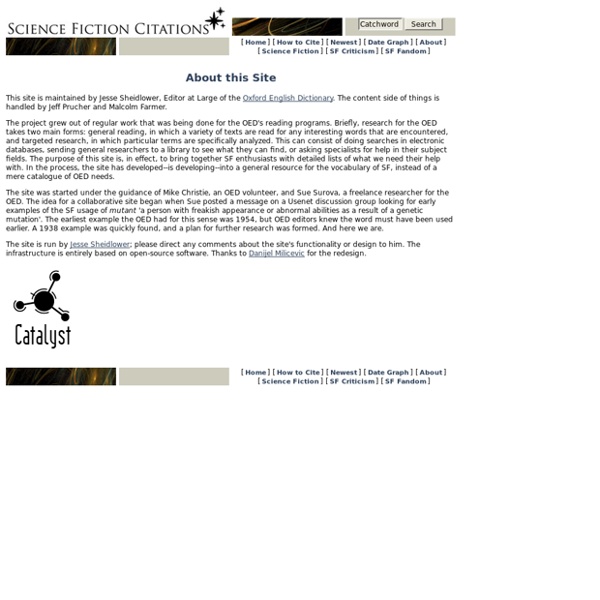 This site is maintained by Jesse Sheidlower, Editor at Large of the Oxford English Dictionary. The content side of things is handled by Jeff Prucher and Malcolm Farmer. The project grew out of regular work that was being done for the OED's reading programs. Briefly, research for the OED takes two main forms: general reading, in which a variety of texts are read for any interesting words that are encountered, and targeted research, in which particular terms are specifically analyzed. This can consist of doing searches in electronic databases, sending general researchers to a library to see what they can find, or asking specialists for help in their subject fields. The site was started under the guidance of Mike Christie, an OED volunteer, and Sue Surova, a freelance researcher for the OED. The site is run by Jesse Sheidlower; please direct any comments about the site's functionality or design to him. Related:  LORE

It’s Never Too Late To Be What You Might Have Been George Eliot? Adelaide Anne Procter? Apocryphal? Anonymous? Dear Quote Investigator: My favorite quotation about untapped potential and enduring spirit is attributed to the prominent Victorian novelist George Eliot: It is never too late to be what you might have been. This popular saying has been printed on refrigerator magnets, posters, shirts, and key chains. Quote Investigator: George Eliot was the pen name of Mary Ann Evans who died in 1880. The earliest evidence of an exact match known to QI appeared in “Literary News: A Monthly Journal of Current Literature” in 1881. Prize Question No 31. In June 1881 the excerpts submitted by readers were printed in the periodical; however, they were not fully vetted for accuracy. We present herewith the selections made by our readers from the writings of George Eliot. Statement 21 was correct though truncated. A very interesting partial match for the saying appeared earlier in a poem in 1859. Devorgill. Her power is sometimes almost Shakespearian.

symboldictionary.net Theophilus of Adana Saint Theophilus the Penitent or Theophilus of Adana (died ca. 538) was an Orthodox cleric in the sixth century Church who is said to have made a deal with the devil to gain an ecclesiastical position. His story is significant as it is the oldest story of a pact with the Devil, and was an inspiration for the Faust legend. His feast day is 4 February. Eutyches, who claimed to be an eyewitness of the events, is the first to record Theophilus’ story. Legend Theophilus was the archdeacon of Adana, Cilicia which is part of modern Turkey. Years later, fearful for his soul, Theophilus repented and prayed to the Virgin for forgiveness. Variations Different retellings of Theophilus’ tale introduce variations of certain details, including: Theophilus’ motivation for pursuing a deal with the devil is simple jealousy.The magician is specifically referred to as a Jew. Possible sources for the legend Importance The Virgin Mary increased in theological importance throughout the 11th century. References

Perry Index The Perry Index is a widely used index of "Aesop's Fables" or "Aesopica", the fables credited to Aesop, the story-teller who lived in ancient Greece between 620 and 560 BC. Modern scholarship takes the view that Aesop probably did not compose all of the fables attributed to him;[1] indeed, a few are known to have first been used before Aesop lived, while the first record we have of many others is from well over a millennium after his time. Traditionally, Aesop's fables were arranged alphabetically, which is not helpful to the reader.[2] Perry and Rodriguez Adardos separated the Greek fables from the Latin ones, with the Greek ones first; then they arranged each group chronologically and by source; finally they arranged the fables alphabetically within these groups.[2] This system also does not help the casual reader, but is the best for scholarly purposes.[2] Ben Edwin Perry (1892–1968) was a professor of classics at the University of Illinois at Urbana-Champaign from 1924 to 1960.

The Word Detective Expressions & Sayings Index If you prefer to go directly to the meaning and origin of a specific expression, click on its relevant entry in the alphabetical list below. Use this alphabet to speed up your search: A B C D E F G H I J K L M N O P Q R S T U V W X Y Z Word Spy Flotsam and jetsam Meaning Ships' goods which are lost at sea. Also used figuratively in non-nautical contexts to means odds and ends, bits and pieces. Origin Flotsam and jetsam are rarely seen apart nowadays although the words, in a variety of spellings, have separate meanings and were frequently used independently in the 17th century. John Cowell, in his 1607 publication The interpreter: or booke containing the signification of words [what we would now prosaically call a dictionary] wrote of "Flotsen alias (Flotzam)". "[At a special brother-hood held at Sandwich: Decreed to give the Lord Warden of free gift and not otherwise the third part] of all wrecks and fyndalls floating and the half of all wrecks and fyndalls jottsome, viz. dryuen to the londe yshore." There's a simple mnemonic that helps distinguish flotsam from jetsam. Whenever flotsam and jetsam meet for a drink they always reminisce about the family's long-lost triplet - lagan. See also - phrases coined by Sir Walter Scott.

Cupid and Psyche Psyche and Amor, also known as Psyche Receiving Cupid's First Kiss (1798), by François Gérard: a symbolic butterfly hovers over Psyche in a moment of innocence poised before sexual awakening.[1] Cupid and Psyche is a story from the Latin novel Metamorphoses, also known as The Golden Ass, written in the 2nd century AD by Apuleius. It concerns the overcoming of obstacles to the love between Psyche (/ˈsaɪkiː/, Greek: Ψυχή, "Soul" or "Breath of Life") and Cupid (Latin Cupido, "Desire") or Amor ("Love", Greek Eros), and their ultimate union in marriage. Although the only extended narrative from antiquity is that of Apuleius, Eros and Psyche appear in Greek art as early as the 4th century BC. The story's Neoplatonic elements and allusions to mystery religions accommodate multiple interpretations,[2] and it has been analyzed as an allegory and in light of folktale, Märchen or fairy tale, and myth.[3] In Apuleius[edit] The story[edit] Violation of trust[edit] Wanderings and trials[edit]