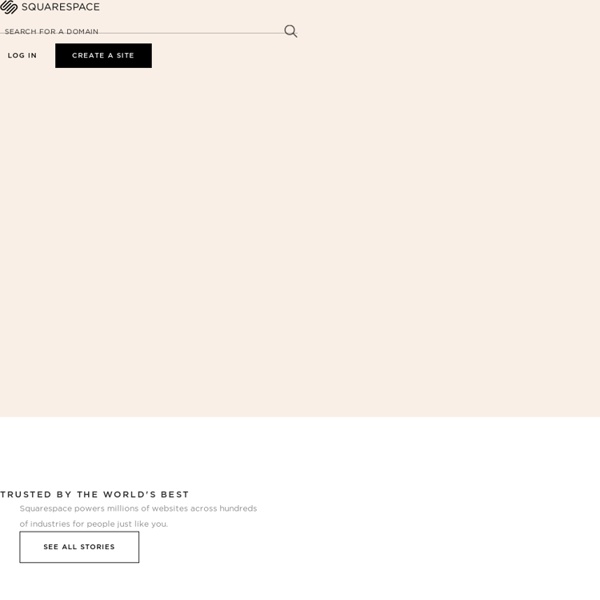 Related:  The Tree of Everything

Polysics Polysics ( ポリシックス , Porishikkusu ? , typeset POLYSICS ) is a Japanese new wave and rock band from Tokyo , who dubs its unique style as "technicolor pogo punk". It was named after a brand of synthesizer , the Korg Polysix . The band started in 1997, but got their big break in 1998 at a concert in Tokyo . They create high energy music, fusing conventional guitar music with synthesized and computer generated sound to create a unique mixture of punk and synthpop heavily inspired by the American bands Devo and The Tubes , as well as Japanese bands such as P-Model and Yellow Magic Orchestra . Their song lyrics often consist of Japanese , English , or just plain gibberish . Create An Elegant CSS3 Navigation Menu Navigation menus are the most important portion of any website. A website's navigation menu should be usable, attractive and intuitive. In this tutorial we will be creating simple and professional looking menu with both horizontal and vertical orientation. Along the way, we will explore the usage of CSS3 features like gradients, box-shodows and text-shadows. Since we won't be using any images to style this menu, it is extremely easy to customize to suit your needs. The image below shows a preview of the navigation menu that we will be building.

Timeshift 165 A race against Oblivion Fallback No WebGL? No worries! Start Under the hood The Delahaye Story Building an Online Web Design Portfolio: Tools, Themes, and Templates May 25 2012 There many benefits to having an online web design portfolio, but there is something more than beneficial to displaying web design work online, in the arena in which it was intended; it just feels at home. Optimized and ready to show off its full potential. A high-quality portfolio can leverage the same interactive, responsive features that a well designed website uses, letting you show clients your strengths and capabilities. Seven Wonders of the Ancient World The Seven Wonders of the World (or the Seven Wonders of the Ancient World) refers to remarkable constructions of classical antiquity[1] listed in an Eurocentric way by various authors in guidebooks popular among the ancient Hellenic tourists, particularly in the 1st and 2nd centuries BC. The most prominent of these, the versions by Antipater of Sidon and an observer identified as Philo of Byzantium, comprise seven works located around the eastern Mediterranean rim. The original list inspired innumerable versions through the ages, often listing seven entries.

Gravity (comics) Gravity (Greg Willis) is a fictional comic book superhero appearing in books published by Marvel Comics. He first appeared in Gravity #1 (August 2005) and was created by Sean McKeever and Mike Norton. Gravity's first appearance was in his own limited series: Gravity #1-5 (2005), later released as a digest-formatted graphic novel as part of the Marvel Next imprint aimed at younger readers. In the same year, Gravity was featured in Marvel Holiday Special (2005) in a minor role. Greg Willis is born and raised in Sheboygan, Wisconsin. Ryukyuan music Ryukyuan music (琉球音楽, Ryūkyū ongaku?), or Okinawan music (沖縄音楽, Okinawa ongaku?), is the music of the Ryukyu Islands, largely made up of Okinawa Prefecture, Japan. Genres[edit] The two main styles of traditional Ryukyuan music are koten (classical) and min'yō (popular). The texture is essentially heterophonic using a single melodic line.

Warabe uta Warabe uta (童歌?) are traditional Japanese songs, similar to nursery rhymes. They are often sung as part of traditional children's games. Y Combinator-Backed Chute Launches A Twilio For Photos We’ve heard a lot about photo-sharing apps over the last year or two, and although the launch of a new social photo app may result in eye-rolling by some, images are becoming an ever-more important medium for communication. As our lives, products, and communications become increasingly visual, content producers, app developers, and site owners alike all have to ramp up their services to meet that escalating demand. Of course, that’s easier said than done. That’s why Chute, a new Y Combinator startup launching today, doesn’t just want to be another photo sharing or syncing app, it wants to be the service every app developer and content producer uses to manage and enhance their photo capabilities. Chute is an Images-as-a-Service startup or, in other words, a cool API for photos.

The Silmarillion So I know I said I wasn't planning on doing (or monkeying with) any of these Silmarillion pieces digitally. But I gave in and joined the Dark Side for a bit to push the Glorfindel and the Balrog piece a little further. I can't help it, sometimes I just have to monkey with the paintings. This version of the image is much more like the frame that was in my head originally, with a little more emphasis put on the fire and atmosphere. Hopefully the digital work doesn't affect the overall classic feel I was going for in the original.