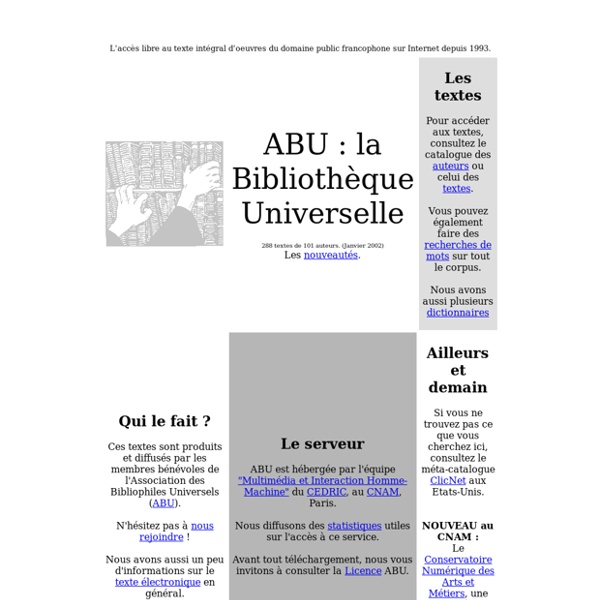 HyperGates and the HyperGrid in Layman’s Terms. « Talvin Muircastle I have been experimenting with a variety of HyperGates, scripted objects that trigger a teleport around the HyperGrid. The “Classic” HyperGate is made to look like a StarGate from the movie and TV franchise. I have always felt a little bothered by that one: sooner or later, I figure, the people who own the rights to that image are going to take notice and some sort of resolution will be found. (Anybody’s guess what that resolution will be.)

Etext Center: Collections University of Virginia Library > Our Organization > The Electronic Text Center The Electronic Text Center (1992-2007), known to many as “Etext,” served the University community’s teaching and research needs in the areas of humanities text encoding for fifteen years. Many of the resources once available on Etext are now available via VIRGO, the Library’s online catalog and the primary access point for all U.Va. Library digital texts and images. Project Gutenberg On August 26 2020, the Project Gutenberg website underwent some major changes. These changes had been previewed since early 2020, and visitors to the old site were invited to try the new site, including giving input via a brief survey. The old site is no longer available. If you found yourself on this page unexpectedly, it is because an old page was redirected here. Please use the navigation menus at the top of the page to find what you were looking for. All of the functionality, and most of the content, from the old site is still here - but in a different location.

Reconstructing the structure of the world-wide music scene with Last.fm Reconstructing the structure of the world-wide music scene with Last.fm Inspired by the Internet mapping efforts of the Opte Project, I decided to investigate how does the network of musicians look like. Those ugly hairballs below are the results. Publications en ligne du MET "The 1688 Paradise Lost and Dr. Aldrich": Metropolitan Museum Journal, v. 6 (1972) Boorsch, Suzanne (1972) 20th-Century Art: A Resource for Educators Paul, Stella (1999) 82nd & Fifth The Metropolitan Museum of Art (2013) Manual of Style (linking) Linking through hyperlinks is an important feature of Wikipedia. Internal links are used to bind the project together into an interconnected whole. Interwiki links bind the project to sister projects such as Wikisource, Wiktionary, and Wikipedia in other languages; and external links bind Wikipedia to the World Wide Web. Appropriate links provide instant pathways to locations within and outside the project that are likely to increase readers' understanding of the topic at hand. When writing or editing an article, it is important to consider not only what to put in the article, but what links to include to help the reader find related information, as well as which other pages should carry links to the article.

Etext Center: Collections The Electronic Text Center (1992-2007), known to many as “Etext,” served the University community’s teaching and research needs in the areas of humanities text encoding for over fifteen years. Many of the resources once available on Etext are now available via VIRGO, the primary access point for all U.Va. Library digital texts and images. In the course of migrating thousands of texts from Etext to VIRGO, it was determined that certain resources were not eligible for inclusion. Many of the texts that were not migrated can be found among other university online text collections, Google Books, and Project Gutenberg. 200 Free Textbooks: A Meta Collection Free textbooks (aka open textbooks) written by knowledgable scholars are a relatively new phenomenon. Below, find a meta list of 200 Free Textbooks, and check back often for new additions. Also see our online collection, 1,700 Free Online Courses from Top Universities. Art History A Textbook of the History of Painting by John Charles Van Dyke, Rutgers

Hacker Culture: The Key To Future Prosperity? Editor’s Note: This guest post was written by Dan Abelon, Founder of SpeedDate. Dan blogs about global startup issues at WorldStartups.org. One of the most exciting trends of the early 21st century has been the explosion of hacker culture around the world. By hackers, I don’t mean people who pose security threats to computer networks.