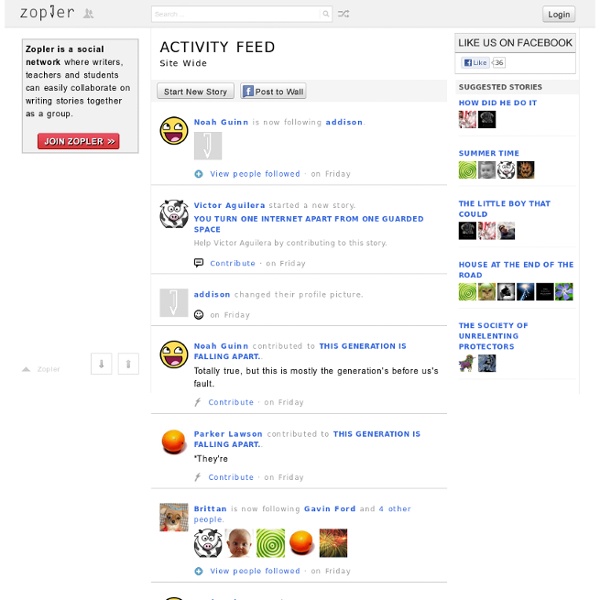 Information Epidemics and Synchronized Viral Social Contagion By Dmitry Paranyushkin, Nodus Labs, Published February 2012 Abstract: In this research we look into the network structures that are the most conducive for informational epidemics and synchronized viral contagion in the context of social networks. Comic Books as Journalism: 10 Masterpieces of Graphic Nonfiction - Kirstin Butler An unusual summer reading roundup of books that blend meaty subject matter with engaging visual storytelling Who doesn't love comic books? While infographics may be trendy today (and photography perennially sexy), there's just something special about the work of the human hand. Good old-fashioned manual labor, literally, brings a unique richness to storytelling where words alone sometimes fall flat. I've put together a list of some of my favorite graphic non-fiction.

12 ways of creating stories with your EFL students I’ve been reading a fair amount recently about the value of storytelling – and, in particular, the telling of vivid and emotionally-engaging stories – to memory in general, and vocabulary-learning and grammar practice more specifically. It certainly seems that learning new words from a list is a duller and less efficient alternative to acquiring and retaining new vocabulary than involving your learners in narratives using the target words. With this in mind, here are four ways you can involve your learners in creating stories around particular lexical or grammatical themes, and a list (and brief descriptions!) of eight other methods from various corners of this site: Stories from boxesDraw eight rectangles on the board, with space between each one.Invite student volunteers to come and draw one thing, each in a different rectangle.

Has a Plague of Social Illness Struck Mankind? This is the first of two articles on the recent outbreak of social contagion studies. If you've been following the news recently, you may be worried that a plague of social contagion has struck mankind. This week, a study found that drinking habits are socially transmissible. Last month, a paper said that both cooperation and selfishness can spread like a virus. In February, a study found that poor sleep and pot smoking are contagious among teens. All of these revelations come from the works of two scientists, Harvard's Nicholas Christakis and U.C. 50 Education Technology Tools Every Teacher Should Know About Technology and education are pretty intertwined these days and nearly every teacher has a few favorite tech tools that make doing his or her job and connecting with students a little bit easier and more fun for all involved. Yet as with anything related to technology, new tools are hitting the market constantly and older ones rising to prominence, broadening their scope, or just adding new features that make them better matches for education, which can make it hard to keep up with the newest and most useful tools even for the most tech-savvy teachers. Here, we’ve compiled a list of some of the tech tools, including some that are becoming increasingly popular and widely used, that should be part of any teacher’s tech tool arsenal this year, whether for their own personal use or as educational aids in the classroom. Social Learning

B&N's Digital Textbook Platform Yuzu Continues to Frustrate Students This being January, a new semester is starting at many colleges across the US, and that means that many students are encountering B&N's textbook platform for the first time. Barnes & Noble hasn't officially launched Yuzu in the 9 months since they turned the platform on, but that doesn't mean they're not inflicting it upon college students. The retailer has been promoting Yuzu in the college bookstores it runs while at the same time neglecting to mention that the platform is still under development. Basically B&N has been recruiting college students to be unwitting guinea pigs in the development process, and conning them into paying for the privilege (with no refund option). And judging by the students who have shown up in my comment section, they're not too happy about the situation.

Variety, not viral spread, is key to Facebook growth - tech - 02 April 2012 The notion that certain ideas spread like viruses is ingrained in everything from product marketing to political campaigning. It is also wrong, say researchers who have studied the spread of Facebook. They say that people are more likely to accept an idea that has been adopted by several social groups. The result has implications for anyone wanting to promote a message. The theory that ideas can be "contagious" is an old one. NCTE High School Matters: Annotating text using Google Docs by Tara Seale Recently, I wrote an article for the Google Docs Blog titled Google Docs: the tool for the 21st century classroom. The focus was how to use Google Docs and folders in an English classroom. Besides the ideas in the Google post, my students are also using Google Docs to annotate articles, short passages, or poems. See the annotation doc for the poem "Ozymandias".

Human evolution: Who are we becoming? A map for the Archaic Revival This article appeared in Entheogenesis Australis (EGA) Journal 3 – 2011/2012 (December 2011) Introduction In 1974, American professor of psychology Dr Clare W Graves wrote an article for The Futurist magazine titled Human Nature Prepares for a Momentous Leap. Graves described an impending change in human consciousness that would be, in his words: ‘…the most difficult, but at the same time the most exciting transition the human race has faced to date. 62 Ideas, Lessons and Humor for English Teachers #engchat I start back to school today for my eleventh year of teaching next door to my own high school English teacher. Mrs. Caldwell taught me to write and love literature. She's a fantastic teacher who is always innovating. Just yesterday, she showed me something new she'd created for her class. She never settles and has won STAR teacher over 20 times.