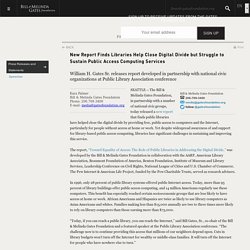 Gates Sr. releases report developed in partnership with national civic organizations at Public Library Association conference SEATTLE -- The Bill & Melinda Gates Foundation, in partnership with a number of national civic groups, today released a new report that finds public libraries have helped close the digital divide by providing free, public access to computers and the Internet, particularly for people without access at home or work. Yet despite widespread awareness of and support for library-based public access computing, libraries face significant challenges in sustaining and improving this service.

In 1996, only 28 percent of public library systems offered public Internet access. Today, more than 95 percent of library buildings offer public access computing, and 14 million Americans regularly use these computers. Despite these benefits, libraries face serious challenges as they continue to provide access to digital information. Ogle Elementary Library. Divine Design: How to create the 21st-century school library of your dreams. 5 Minute Librarian: 9 Ways to Place Library eBooks into the Hands of Readers. How do you advertise your eBook collection? 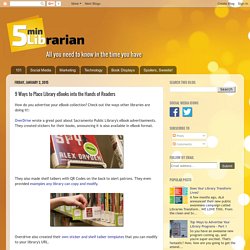 Check out the ways other libraries are doing it! : OverDrive wrote a great post about Sacramento Public Library's eBook advertisements. They created stickers for their books, announcing it is also available in eBook format. June. The State of Preschool 2010 provided some good news regarding two new pilot programs in Alaska and Rhode Island, meaning there is no longer a “dirty dozen” of states without preschool education programs. 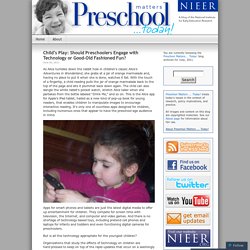 However, 10 states still have not made preschool a priority and lack such programs for young learners. These “Bottom Ten” states do provide some services to their youngest learners through federal special education and Head Start programs, though enrollment is limited only to those most “at-risk,” whether due to disability or meeting a low-income threshold. iPad Kids - Page 10 of 150 - Educational & Learning Apps for the iPad and iPad mini. The Alice App App Review.

I am not a big fan of reading e-books simply because I cling to the old ways and languish in feeling crisp paper between my fingers while listening to the rustle of paper as I turn pages to reveal more about a story I’ve become entrenched in. 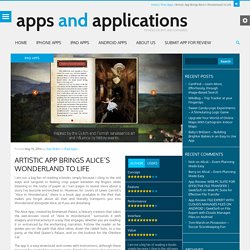 However, for lovers of Lewis Carroll’s “Alice in Wonderland,” there is a book app available in the iPad that makes you forget about all that and literally transports you into Wonderland alongside Alice, as if you are dreaming. The Alice App, created by Emmanuel Paletz, is literary creation that takes the well-known novel of “Alice in Wonderland,” surrounds it with imagery and interactivity in a way that engages, whether you are reading it or entranced by the enchanting narration. Follow the reader as he guides you on the path that Alice takes, down the rabbit hole, to a tea party, at the Red Queen’s Palace, and on the lookout for the Cheshire Cat. The Alice App - Educational App Store. A favourite children’s book for well over a century and also enjoyed by many an adult, Alice’s Adventures in Wonderland has been related in many different print editions, plays, animations and films. 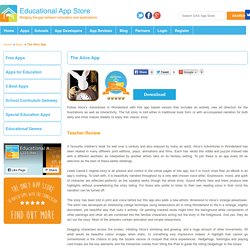 Each has retold this riddle and puzzle imbued tale with a different aesthetic as interpreted by another artists take on its fantasy setting. To join these is an app every bit as welcome as the best of these earlier retellings. Lewis Carroll’s original story is all present and correct in the virtual pages of this app, but it is much more than an eBook in an app’s clothing.

To start with, it is beautifully narrated throughout by a very well chosen voice artist. Expression, mood, and quirk of character are reflected perfectly as the speaker works though the whole story. The Alice App - A Book App That Transports You to Wonderland. Online books are becoming more popular by the day, and while most adults read novels that are meant purely to be ingested by reading, book apps meant for younger folks tend to offer a bit more. 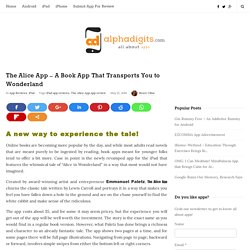 Case in point is the newly revamped app for the iPad that features the whimsical tale of “Alice in Wonderland” in a way that most would not have imagined. Created by award-winning artist and entrepreneur Emmanuel Paletz, The Alice App churns the classic tale written by Lewis Carroll and portrays it in a way that makes you feel you have fallen down a hole in the ground and are on the chase yourself to find the white rabbit and make sense of the ridiculous.

The app costs about $5, and for some it may seem pricey, but the experience you will get out of the app will be well worth the investment. The story is the exact same as you would find in a regular book version. The Alice App - Educational App Store. From 'Inanimate Alice' to 'The Fantastic Flying Books': How Transmedia and Digital Books Are Transforming School Libraries. It was, she remembered, the first standing ovation she ever received as a librarian. 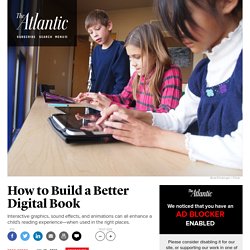 The Paratexts of Inanimate Alice. Inanimate Alice – Designer Librarian. The principal at my daughter’s school has been waxing poetic lately about the 40 Developmental Assets for Adolescents, as identified by the Search Institute, a research organization with a mission to discover “what kids need to succeed.” 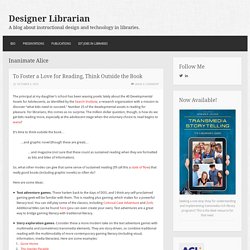 What eBooks Mean for School Libraries: Part 1. Is your school library ready to go digital? 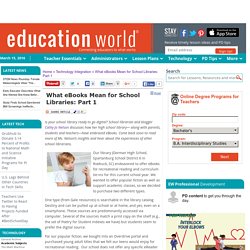 When Growth in Children’s E-Books Hits the Poverty LineDigital Book World. Expert publishing blog opinions are solely those of the blogger and not necessarily endorsed by DBW. 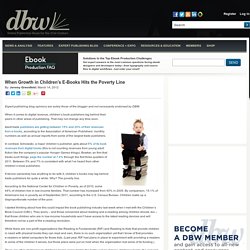 When it comes to digital revenue, children’s book publishers lag behind their peers in other areas of publishing. That may not change any time soon. Adult trade publishers are getting between 15% and 20% of their revenues from e-books, according to the Association of American Publishers’ monthly numbers as well as annual reports from some of the largest trade publishers. Ebooks Finding Their Place Among Young Readers.

Two recent studies of children’s and families’ reading habits suggest that while young readers may not be flocking to ebooks in droves, they are figuring out where digital content fits into their reading lives. 93% of children ages 2–13 now read an ebook at least once a week, according to new research from Digital Book World and PlayScience, a figure that’s held steady (up from 92%) since the past year. The percentage of children who read ebooks has likewise remained consistent, with about two-thirds reportedly doing so in January 2014 and January 2015 alike. But stability isn’t the same thing as growth, and a separate study of kids’ reading habits, released by Scholastic yesterday, suggests ebooks aren’t catching among young readers.