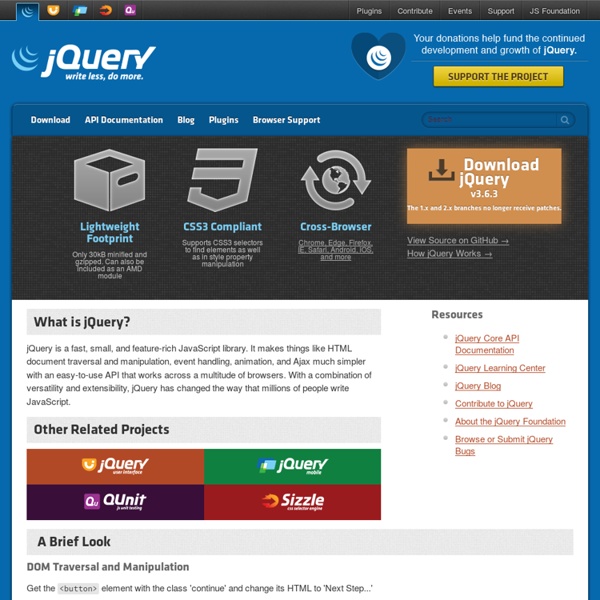 What is jQuery? jQuery is a fast, small, and feature-rich JavaScript library. It makes things like HTML document traversal and manipulation, event handling, animation, and Ajax much simpler with an easy-to-use API that works across a multitude of browsers. With a combination of versatility and extensibility, jQuery has changed the way that millions of people write JavaScript. Corporate Members Support from our corporate members makes it possible for the jQuery Foundation to continue our work on our JavaScript libraries and pushing the open web forward with events and participation in the standards process.

Top 20 Best jQuery Carousel Plugins Carousel elements will give your website’s visitors the ability to easily access multiple content items. Carousels are scrolling lists of items, displayed horizontally and they have dynamic effects. You are able to scroll back and forth and see the list of items. Carousel elements or effects are also used in creating sliders. 30 Best Websites to Learn Design and Development Some of the benefits of online education are really focused on money, personal time management, pace and real fun projects and active communities. Recently I have published an interview with Matt Loszak who learnt iOS development himself and quit his day job to pursue entrepreneurial success. Affordability A complete navigational system Scroll through these elements by using your up/down/left/right and by clicking on the navigational elements or the large images themselves. New York City, United States Barcelona, Spain Berlin, Germany standalone demo

a collection of menus, galleries and web resources Blue print mega menu A responsive mega menu, more great work from Tympanus Blueprints. jQuery 1.9.1 closure-library - Closure Library The Closure Library is a broad, well-tested, modular, and cross-browser JavaScript library. You can pull just what you need from a large set of reusable UI widgets and controls, and from lower-level utilities for DOM manipulation, server communication, animation, data structures, unit testing, rich-text editing, and more. The Closure Library is server-agnostic, and is intended for use with the Closure Compiler. At Google, it's used in Web Search, Maps, YouTube, Google Plus, Gmail, Docs, Sites, Books, Blogger, Calendar, Picasa Web Albums, and more.

10 Awesome jQuery and HTML5 Audio Players Want to play audio on your website? These jQuery and HTML5 Audio Players plugins will be very useful to you. They’re great for fullscreen websites which use audio to create a certain mood or feel or for band and DJ’s websites. About the New Thinking for a Living February 20th, 2010 About the New Thinking for a Living By Frank Chimero After a spirited, inspiring pow-wow in the desert last year, Duane, Shane, Bob, Ian and I decided we needed to drastically rethink Thinking for a Living. In short, we noticed people were really enjoying the long-form content on the site. The essays were the content we most wanted to produce and consume, and some how, over the course of the first years of Thinking for a Living, we had found an audience for it.

Make a concrete5 theme Concrete5 is a new-generation CMS, with which non-engineers can develop a website. This CMS system is ease to use. You can use the application to change your pages from the front-end of your site. It's a system with a low learning curve. Meet the New Stack, Same as the Old Stack Five years ago, if you asked any client-side developer which library or framework to use the most likely answer would have been jQuery. Since then, client-side development has become far more complex. A friendly wrapper for DOM programming and a browser compatibility layer isn't enough to help us write modern applications. Starting a project today involves selecting a package manager, module system, build system, templating language, data binding library, a sync layer, a widget library, and a test framework. And it doesn't end there: many of us also regularly use a dynamic CSS language, and mobile SDKs. I wouldn't say this is a negative trend, but with large companies backing or offering solutions to these problems, making an informed decision on each of these technologies is difficult.

20 New Free Javascript and jQuery Plugins John Resig developed the jQuery library in 2006, and since then this become the most popularJavaScript libraries on the web. Without a doubt, jQuery is well known and frequently used in the web design community. Jquery lets you prototype and create any kind of unique and creative user interface with minimal work and that is the reason why it increases in popularity each day. Thanks to jQuery, web design became faster, easier and more approachable. Lateral On-Scroll Sliding with jQuery After getting the request, we are going to show you how to create a "slide-in on scroll" effect. You've probably seen this cool effect on some websites, like on Nizo or in the portfolio section of brilliantly designed La Moulade. The main idea is to laterally slide in elements depending on the scroll position of the document. Dividing the page into a left and right side, we want to move the elements from "outside" of the page to the center when they are in the viewport. We will also add the opti View demo Download source

hoverIntent jQuery Plug-in What is hoverIntent? hoverIntent is a plug-in that attempts to determine the user's intent... like a crystal ball, only with mouse movement! It is similar to jQuery's hover method. However, instead of calling the handlerIn function immediately, hoverIntent waits until the user's mouse slows down enough before making the call. Why? To delay or prevent the accidental firing of animations or ajax calls. 3DNP - Introduction - www.thoro.de 3DNP (3D-No Plugins) is a 3D viewer that doesn't need browser plugins, only JavaScript. 3DNP is licensed under GNU Public License (GPL) and is therefore completely free. It is easy to configure and can be integrated into your website by using an IFrame. You can download 3DNP by clicking here (ZIP-Archive, 3DNP 1.2c). 3DNP uses 3 different starting modes: