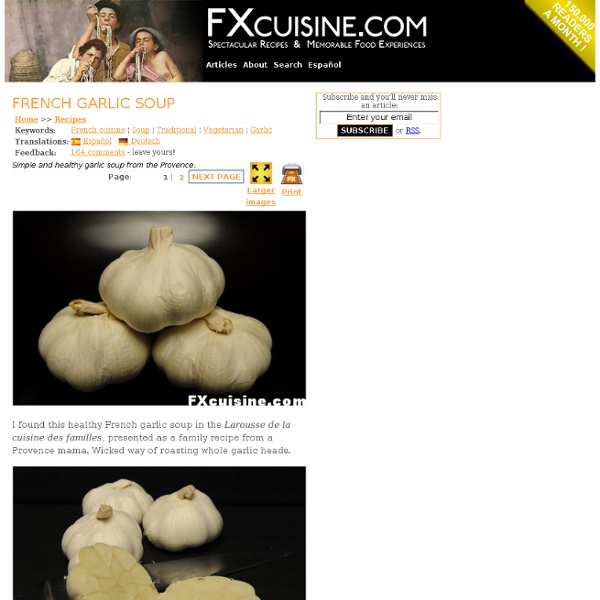 Home >> Recipes Simple and healthy garlic soup from the Provence. I found this healthy French garlic soup in the Larousse de la cuisine des familles, presented as a family recipe from a Provence mama. Wicked way of roasting whole garlic heads. Start with 4 garlic heads - 1 per guest as a light main course. Cut each head in half but don't peel. Pour a large glass olive oil inside an ovenproof dish and place each half garlic head flat in the oil. Roast the oven for about an hour or until the garlic is soft throughout and nicely browned. ... and free the remaining half-cloves. The bottom halved will require some help with a pointed half to free the half garlic cloves. Place all the garlic cloves in large pot.

Chicken Rollatini with Spinach alla Parmigiana Baked chicken breasts rolled with spinach and ricotta topped with pomodoro sauce and melted mozzarella. A dish the whole family will love! Since making chicken rollatini stuffed with prosciutto and cheese a few weeks back my husband has been craving chicken rollatini the way he grew up eating it, stuffed with cheese and topped with sauce and more cheese. I had to sneak some spinach in them against his will, but he was very pleased with the final results.

Baked Wonton Tacos When I was a little kid, around every New Year’s, my mom and grandma would sit down and make Mandu {Korean version of potstickers or wontons} all day to make Teokguk {Korean version of wonton soup} and I’d just sit with them trying to help out. I remember trying to help out making my own Mandu, though not really successfully. Then my mom and grandma made their own mandu skins from scratch… And now… how grateful I am that I can get premade mandu skins so easily… although I think I should try and make my own skins sometime… It’s definitely on my to-do list.

Buffalo Chicken Bites It’s football season and I’m ready for some party food! Let’s take a quick time out from baby food posts, shall we? We had friends over this week for Monday Night Football and I immediately knew I had to try these Buffalo Chicken Bites that I had bookmarked. 12.02.2008 - Broccoli compound targets key enzyme in late-stage cancer By Robert Sanders, Media Relations | 02 December 2008 BERKELEY — An anti-cancer compound found in broccoli and cabbage works by lowering the activity of an enzyme associated with rapidly advancing breast cancer, according to a University of California, Berkeley, study appearing this week in the online early edition of the journal Proceedings of the National Academy of Sciences. Indole-3-carbinol, or I3C, is a chemical compound found in broccoli and other cruciferous vegetables and which is known to stop the growth of breast cancer cells. UC Berkeley researchers' discovery of how I3C works will help them modify the compound to improve its anti-cancer effects. (Firestone & Bjeldanes labs/UC Berkeley) The compound, indole-3-carbinol, is already undergoing clinical trials in humans because it was found to stop the growth of breast and prostate cancer cells in mice.

Healthy Baked Chicken Nuggets Chunks of all white meat chicken breasts coated in breadcrumbs and parmesan cheese then baked until golden. An easy chicken recipe your whole family will love. What can be more kid friendly than chicken nuggets, even the pickiest kids like them. Serve them with ketchup, bbq sauce or whatever you like to dip your nuggets into. Adults can serve them over your favorite salad for a satisfying lunch. Kids love finger foods or anything you can eat with toothpicks so when my daughter was young I would make her a dish of bite sized goodies she liked such as tomatoes, olives, pasta, etc. and served them with toothpicks and she always cleaned her plate!

Baked Zucchini Sticks and Sweet Onion Dip: that bloomin' zucchini! Today, class, it being late July and all, we’re going to examine our zucchini facts: •Zucchini is always at the end of any A-to-Z food list; •Zucchini and fruitcake are the undeserving targets of many a joke; •The zucchini plant literally grows like a weed, making it absolutely ubiquitous in vegetable gardens across America; •And for that reason, enterprising cooks have discovered ways to turn it into muffins, and cake, and pancakes, and… Baked Zucchini Sticks. You know that onion appetizer that came into bloom back in the late ’80s? Outback Steakhouse claims it invented the “Bloomin’ Onion” back in 1988, and it wasn’t long before quasi-fast food restaurants adopted it as the hottest appetizer since artichoke dip baked in a bread bowl.

Austrian Goulash Soup I found this recipe in one of my grandma’s cook books. You see, our Dutch food is the pretty straight-forward, no-nonsense and nourishing type of food. No light summer dishes or use of exotic spices. I love our Dutch food, but there’s a time and place for everything, so when autumn sets in that’s when I install myself on the couch with a huge pile of Dutch cook books and a cup of tea and try to find some new ideas to go into my meal rotation.

100 Greatest Cooking Tips (of all time!) : Chefs 1. Remember, y'all, it’s all about the prep. Take away the stress by doing the prep the night or day before. You'll look like a star.Paula Deen Paula’s Best Dishes Ricotta, Mushroom, and Herb Stuffed Chicken Breasts Ricotta, Mushroom, and Herb Stuffed Chicken Breasts I found this recipe on 365 Days of Food that I adapted and made for dinner. This chicken was a huge hit with my husband and my friend who was over for dinner. The chicken was moist and tender while the ricotta/mushroom mixture inside was flavorful and so delicious.