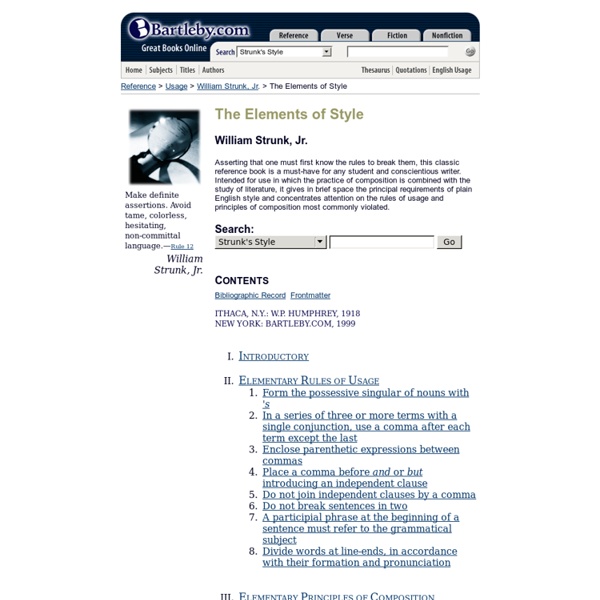 THE NEW WORLD ORDER Title: The New World Order Author: H.G. Wells * A Project Gutenberg of Australia eBook * eBook No.: 0400671h.html Language: English Date first posted: Sep 2004 Most recent update: Jun 2013 This eBook was produced by Don Lainson and updated by Roy Glashan. Project Gutenberg of Australia eBooks are created from printed editions which are in the public domain in Australia, unless a copyright notice is included. We do NOT keep any eBooks in compliance with a particular paper edition. English grammar resources Do you have a question about the correct usage of the semi-colon or how to place relative adverbs in a sentence? If so, you've come to the right place! The edufind.com English grammar guide is a complete reference on the rules of English usage. Every grammatical rule is explained in clear, simple language with several examples and, when necessary, counter-examples. The grammatical rules covered by this guide are categorized by part of speech.

Writing "Original” Papers § Harvard Guide to Using Sources Some writing assignments you receive at Harvard will explicitly ask you to present an "original" thesis, claim, or idea. But even when the word "original" isn't mentioned, you should assume that your professor expects you to develop a thesis that is the product of your own thinking and not something drawn directly from a source and planted in your paper. Occasionally an assignment will require only a summary of your reading, particularly if the instructor wants to make sure you have understood a particularly complex concept; however, some assignments may be worded in a way that leaves expectations ambiguous (you may be asked, for example, to "discuss" or "consider" a source), and you may think you are only expected to summarize when, in fact, you are expected to make an argument. When in doubt about whether you are supposed to make an argument in your paper, always check with your instructor to make sure you understand what you're expected to do.

If You Feel Better, a higurashi/umineko series fanfic If You Feel Better "It hurts, doesn't it?" "Ngh… A-ah…" "I'm hurting you, aren't I?" 100 Exquisite Adjectives By Mark Nichol Adjectives — descriptive words that modify nouns — often come under fire for their cluttering quality, but often it’s quality, not quantity, that is the issue. Plenty of tired adjectives are available to spoil a good sentence, but when you find just the right word for the job, enrichment ensues. Practice precision when you select words. Here’s a list of adjectives:

Fifty Orwell Essays Title: Fifty Orwell Essays Author: George Orwell * A Project Gutenberg of Australia eBook * eBook No.: 0300011h.html Edition: 1 Language: English Character set encoding: Latin-1(ISO-8859-1)--8 bit (html) Date first posted: August 2003 Date most recently updated: January 2010 This eBook was produced by: Col Choat colc@gutenberg.net.au Production notes: Author's footnotes appear at the end of the paragraph where indicated. Italicised words are shown in upper case. All essays in this collection were first published during George Orwell's lifetime, and have appeared in a number of Orwell essay collections published both before and after his death. Details are provided on the George Orwell page at Project Gutenberg of Australia eBooks are created from printed editions which are in the public domain in Australia, unless a copyright notice is included.

Lynch, Guide to Grammar and Style By Jack Lynch Last revised 28 January 2011. Note: I've been working on a new guide that might help some readers of this one, called “Getting an A on an English Paper.” It's far from finished, but it may still be useful. The Art of Being Right The Art of Being Right: 38 Ways to Win an Argument (1831) (Eristische Dialektik: Die Kunst, Recht zu Behalten) is an acidulous and sarcastic treatise written by the German philosopher Arthur Schopenhauer in sarcastic deadpan.[1] In it, Schopenhauer examines a total of thirty-eight methods of showing up one's opponent in a debate. He introduces his essay with the idea that philosophers have concentrated in ample measure on the rules of logic, but have not (especially since the time of Immanuel Kant) engaged with the darker art of the dialectic, of controversy. Whereas the purpose of logic is classically said to be a method of arriving at the truth, dialectic, says Schopenhauer, "...on the other hand, would treat of the intercourse between two rational beings who, because they are rational, ought to think in common, but who, as soon as they cease to agree like two clocks keeping exactly the same time, create a disputation, or intellectual contest." Publication[edit] A.

Monica Rodgers's Entries Wakefield, RI Monica Rodgers is serial entrepreneur, accomplished business woman, social media consultant, photographer, parenting goods designer, and mother of two. Monica still sells her ever popular brand of infant and toddler car seat covers on Facebook and has launched an exciting project that explores the inner and outer world of women through photographs, interviews and other forms of media called The Revelation Project. 23 Advice Websites We are all apprentices in a craft where no one ever becomes a master. ~Ernest Hemingway How strong is your writing? No matter how good you think it is, there’s always room for improvement. In most cases, plenty of room.