5 Ways Your Brain Is Messing With Your Head 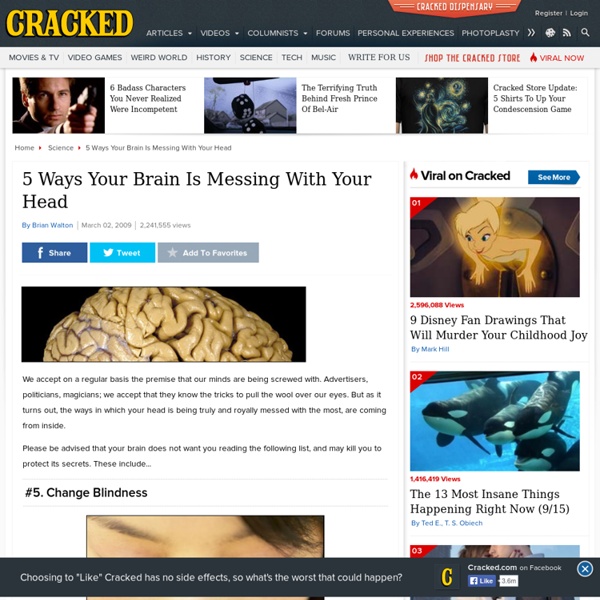 We accept on a regular basis the premise that our minds are being screwed with. Advertisers, politicians, magicians; we accept that they know the tricks to pull the wool over our eyes. But as it turns out, the ways in which your head is being truly and royally messed with the most, are coming from inside. Please be advised that your brain does not want you reading the following list, and may kill you to protect its secrets. #5. What is it? It's your inability to notice changes that happen right in front of you, even if they're hugely obvious... as long as you don't see the actual change take place. Um, What? Consider Alfonso Ribeiro. Now, if suddenly that image of Carlton blinked and changed to a different image, you'd notice it. In fact, if the entire text of this article--and the whole color and layout of this website--changed while you were gone, you probably wouldn't notice. A scientist named George McConkie started working on this in the 70s. Why Does the Brain Lie About it? #4. #3. Related:  brains

5 Superpowers We All Had as Babies (According to Science) To many of us, kids are just a squishy bundle of preciousness that can't even take a decent punch. If there's anything super about them it's their ability to produce a seemingly infinite amount of poop. But you only think this because, like most super geniuses, babies revel in deception because they answer to no god. Not unlike Clark Kent, babies everywhere managed to fool the world with their mild-mannered public persona, masking the amazing superpowers nearly all of them possess. Slap a pair of tights on any random toddler, and you have a bona fide superhero (or, realistically, supervillain). When deprived of one sense or a skill, a person usually compensates for it in some other way. You blame me for never making it as a professional dancer, mommy. It gets weirder. See, their mind-reading doesn't end with fellow humans. You are... utterly disgusted and... thoroughly depressed. Take a look at this picture of two monkeys and see if you can tell the difference between them:

5 Mind-Blowing Ways Your Senses Lie to You Every Day We are so completely dependent on our five senses every moment of the day that we totally forget how full of shit they can be. Your reality is cobbled together from a bunch of different parts of your brain working in conjunction, and often it's like a bickering conference room full of uncooperative co-workers. In fact, we're pretty sure the thing your brain does best is convince you that it works. But it doesn't take much to spot the bizarre little flaws in your gray matter. #5. Photos.com/AbleStock.com/Getty Images When you hear someone talk, the whole process is pretty straightforward, right? Short answer: your eyes. In the clip, you see (and hear) a guy saying "bah bah bah" over and over. BBCYour brain also gave the "fah" version a tan, for unknown reasons. This illusion is called the McGurk effect, and the creepiest part is that, even knowing know full well what's going on, you can't get your ears to hear the correct sound. But that's not the only time your eyes screw you over ... #4.

The 5 Most Widely Believed WWII Facts (That Are Bullshit) Hitler Was an Evil Genius Claimed By: The [Alternate] History Channel , Nazi admirers, The Rise and Fall of the Third Reich. Hitler, in addition to being the go-to example in every bad debate, has sort of become history's supervillain. Hitler was the Lex Luthor to the non-Aryan Superman. Why it's Bullshit: Since there are no cheap shots when it comes to Hitler, let's get this out of the way: Do you have any idea how hard it is to get rejected by an art school? Yet Hitler failed his entrance exam. His Munich Beer Putsch was basically one enormous "let's get arrested!" As a politician, he was a famous speaker despite his silly accent; had trouble breaking 40 percent in the polls despite "thinning" (assassinating) opposition. His contributions as a military tactician included allying Germany with a living cartoon character. Benito Mussolini: This dude existed. Hitler simply gets too much credit for the decisions made by people around him. FDR Knew About Pearl Harbor Ahead of Time

What Neuro-revolution? The Public Find Brain Science Irrelevant and Anxiety-provoking It feels to me like interest in the brain has exploded. I’ve seen huge investments in brain science by the USA and Europe (the BRAIN Initiative and the Human Brain Project), I’ve read about the rise in media coverage of neuroscience, and above all, I’ve noticed how journalists and bloggers now often frame stories as being about the brain as opposed to the person. Look at these recent headlines: “Why your brain loves storytelling” (Harvard Business Review); “How Netflix is changing our brains” (Forbes); and “Why your brain wants to help one child in need — but not millions” (NPR). There are hundreds more, and in each case, the headline could be about “you” but the writer chooses to make it about “your brain”. Consider too the emergence of new fields such as neuroleadership, neuroaesthetics and neuro-law. Having said all that, I’m conscious that my own perspective is heavily biased. Now there’s even more evidence that the neuro-revolution is on hold. “I became severely depressed.

5 Things You Can Do Right Now to Become Instantly Smarter There might not be a worse feeling than when you have some kind of huge project due and the creative part of your brain just slowly grinds to a halt. Some people have little rituals they go through to try to jump-start their muse, from "take a relaxing walk" to "steal someone else's idea and then secretly murder them." But why not look to science to figure out what actually works? Well, we don't guarantee that any of the below will work for you -- all we can say is that smarter people than us have gotten them to work under scientifically controlled conditions. #5. Andrea Chu/Digital Vision/Getty Images When it comes to solving problems, we like to think we know how to get the best results out of ourselves. Well, science is here to do what science does best and tell us that we're doing it all wrong. Thomas Northcut/Lifesize/Getty Images"4 p.m. already? Christopher Robbins/Digital Vision/Getty Images"Wait, pickles with hamburgers stuffed in the middle!" Think about the Beatles. #4. #3.

Does the head remain briefly conscious after decapitation (revisited)? A Straight Dope Classic from Cecil's Storehouse of Human Knowledge June 12, 1998 Dear Cecil: In the answer about the guillotine in your online archive, you say that "the fatal blow induces immediate unconsciousness." — Joel Brusk, via AOL Dear Joel: Let's see. A lot of people disputed my claim that victims of the guillotine blacked out immediately. Not likely. But let's return to the original question, appalling though it may be: Is a severed head aware of its fate? It doesn't get any better. Is it possible? Then I received a note from a U.S. My friend's head came to rest face up, and (from my angle) upside-down. I've spoken with the author and am satisfied the event occurred as described. — Cecil Adams

3D map of human brain is the most detailed ever - health - 20 June 2013 The folds, creases and intricate internal structures that make up the human brain are being revealed in unprecedented detail. A new three-dimensional map called BigBrain is the most detailed ever constructed, and should lead to a more accurate picture of how the brain's different regions function and interact. Until now, the precise placement of the neurons that make up our brain circuitry has been difficult to map, largely because the human brain's surface is covered with folds and creases. Slicing a brain exposes only two dimensions, so it is often unclear where and how the cells within these folds are organised in three-dimensional space. To make the new map, Katrin Amunts of the Jülich Research Centre in Germany and her colleagues embedded a 65-year old woman's brain in wax, sliced it into more than 7400 sections each 20 micrometres thick – one-fifth of the width of a human hair – and made digital images of the slices, also at a resolution of 20 micrometres. Tour de force

6 Animals That Kill Nature's Scariest Creatures For Fun We have made it our mission to celebrate the underrated badasses of the animal kingdom because in general, Hollywood has taught us to be afraid of the wrong creatures. For instance, for every animal you'd be terrified to run across in the wild, the odds are there is at least one other beast who sees it as a tasty snack. And often it's what you'd least expect. Like ... #6. The Terror: So you are a tarantula, the hairy giant of the arachnid world and the absolute worst nightmare of, oh, about 99 percent of humanity. Photos.comYour favorite hangouts include cradles, wood sheds and the bottom of sleeping bags. As you roam the landscape looking for a late night snack, you spot a potential prey: a silly-looking insect buzzing clumsily around. ... only to wake up hours later, unable to move, and with a nasty writhing feeling inside you. Eaten By: Via Wikipedia A wasp isn't anyone's favorite insect to find flying around in their house, but nobody is going to call 911 if they see one. #5. #4.