People Can Learn New Skills While They Dream, Scientists Say 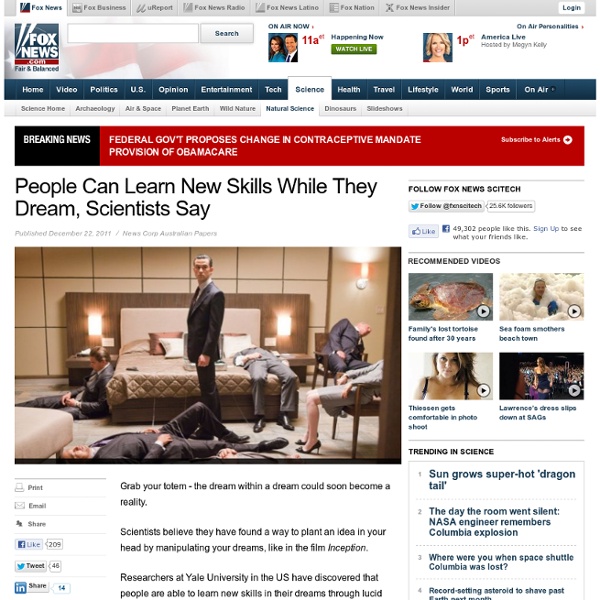 Instant Expert 31: The human brain Cookies on the New Scientist website close Our website uses cookies, which are small text files that are widely used in order to make websites work more effectively. To continue using our website and consent to the use of cookies, click away from this box or click 'Close' Find out about our cookies and how to change them The 6 Most Mind-Blowing Animal Senses You probably already know that when it comes to everything but intellectual pursuits and wearing cardigans in a knot over one's shoulders, animals have humans beat. All of your senses together can't match what a dog can pick up with its nose, for instance. But every now and then, an animal's sensory superiority goes above and beyond the usual and takes a turn for the bizarre and/or terrifying. #6. Vampire Bats Have a Map of Your Veins Wikipedia

China–France relations China–France relations, also known as Sino-French relations or Franco-Chinese relations, refers to the interstate relations between China and France (Kingdom or later). Note that the meaning of both "China" and "France" as entities has changed throughout history; this article will discuss what was commonly considered 'France' and 'China' at the time of the relationships in question. There have been many political, cultural and economic relationships between the two countries. Rubber Hand Trick Reveals Brain-Body Link The rubber hand illusion is more than a vaguely creepy parlor trick. It’s a window into relationship between our mental and physical self-conception. During the illusion, a participant’s hand is hidden, and a rubber hand positioned so that it appears as her own. She knows that it’s fake — but when both hands are stroked simultaneously, what’s seen and felt becomes blurred. Suddenly the rubber hand literally feels like it belongs to her.

5 Mind-Blowing Ways Your Senses Lie to You Every Day #2. Your Brain Changes the Size of Objects Around You Yuliya Chsherbakova/Photos.com Your eyes are lying to you right now about something as basic as the size of the stuff you're looking at. Immaterials: light painting WiFi “The complex technologies the networked city relies upon to produce its effects remain distressingly opaque, even to those exposed to them on a daily basis.” – Adam Greenfield (2009) Immaterials: light painting WiFi film by Timo Arnall, Jørn Knutsen and Einar Sneve Martinussen. This project explores the invisible terrain of WiFi networks in urban spaces by light painting signal strength in long-exposure photographs. A four-metre tall measuring rod with 80 points of light reveals cross-sections through WiFi networks using a photographic technique called light-painting. This builds on a technique that was invented for the 2009 film ‘Immaterials: the Ghost in the Field’ which probed the edges of the invisible fields that surround RFID readers and tags in the world.

5 Mind-Blowing Ways Your Senses Lie to You Every Day We are so completely dependent on our five senses every moment of the day that we totally forget how full of shit they can be. Your reality is cobbled together from a bunch of different parts of your brain working in conjunction, and often it's like a bickering conference room full of uncooperative co-workers. In fact, we're pretty sure the thing your brain does best is convince you that it works. But it doesn't take much to spot the bizarre little flaws in your gray matter. For example ... #5.

3D map of human brain is the most detailed ever - health - 20 June 2013 The folds, creases and intricate internal structures that make up the human brain are being revealed in unprecedented detail. A new three-dimensional map called BigBrain is the most detailed ever constructed, and should lead to a more accurate picture of how the brain's different regions function and interact. Until now, the precise placement of the neurons that make up our brain circuitry has been difficult to map, largely because the human brain's surface is covered with folds and creases. Mind-reading monkey brains look similar to ours - life - 15 June 2013 MONKEYS may have a primitive version of the human ability to put ourselves in another's shoes. Intelligent animals such as apes can intuit others' intentions, suggesting they have some theory of mind capability. But only humans can reason that others may not hold their own beliefs.

5 Ways Your Brain Is Messing With Your Head We accept on a regular basis the premise that our minds are being screwed with. Advertisers, politicians, magicians; we accept that they know the tricks to pull the wool over our eyes. But as it turns out, the ways in which your head is being truly and royally messed with the most, are coming from inside. Please be advised that your brain does not want you reading the following list, and may kill you to protect its secrets. These include... 5 Superpowers We All Had as Babies (According to Science) To many of us, kids are just a squishy bundle of preciousness that can't even take a decent punch. If there's anything super about them it's their ability to produce a seemingly infinite amount of poop. But you only think this because, like most super geniuses, babies revel in deception because they answer to no god. Not unlike Clark Kent, babies everywhere managed to fool the world with their mild-mannered public persona, masking the amazing superpowers nearly all of them possess. Slap a pair of tights on any random toddler, and you have a bona fide superhero (or, realistically, supervillain). The many kick-ass powers we lost as we got older include: