The top 50 foreign language films of the last decade 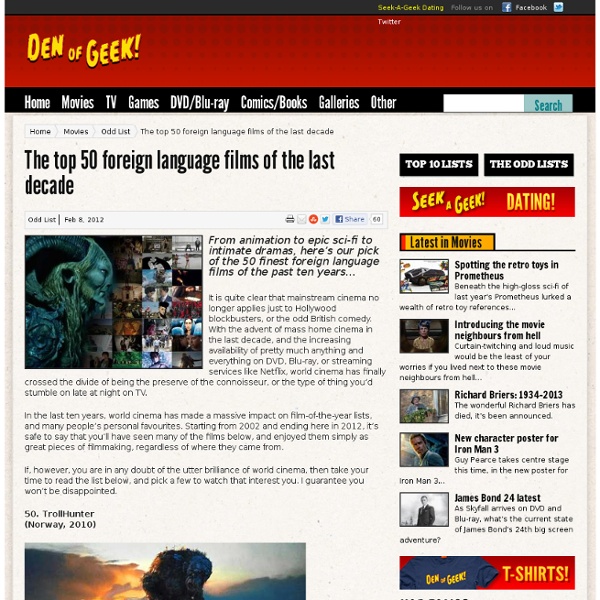 It is quite clear that mainstream cinema no longer applies just to Hollywood blockbusters, or the odd British comedy. With the advent of mass home cinema in the last decade, and the increasing availability of pretty much anything and everything on DVD, Blu-ray, or streaming services like Netflix, world cinema has finally crossed the divide of being the preserve of the connoisseur, or the type of thing you’d stumble on late at night on TV. In the last ten years, world cinema has made a massive impact on film-of-the-year lists, and many people’s personal favourites. Starting from 2002 and ending here in 2012, it’s safe to say that you’ll have seen many of the films below, and enjoyed them simply as great pieces of filmmaking, regardless of where they came from. If, however, you are in any doubt of the utter brilliance of world cinema, then take your time to read the list below, and pick a few to watch that interest you. 50. The anti-Hollywood blockbuster. 49. 48. 47. 46. 45. 44. 43. 42.

The 50 Best Movies on Netflix Instant We love the convenience of streaming movies on Netflix Instant, but we don’t always love the navigating through the countless films in the service’s ever-expanding catalog to find something to watch. So we’ve compiled our list of recommended titles for you—whether you love classics, comedies, documentaries or just good ol’ fashioned kung-fu. The genres vary greatly here—and range in age from brand new to 87-years-old—but all 50 of these films come with the Paste stamp of approval. 50. 49. 48. 47. 46. 45. 44. 43. 42. 41. 40. 39. 38. 37. 36. 35. 34. 33. 32. 31. 4 Months, 3 Weeks and 2 DaysYear: 2007Director: Christian Mungui With eerily realistic performances and stunning direction, 4 Months, 3 Weeks, and 2 Days combines an uncomfortably forthright discussion of abortion with long, virtuosic handheld camera takes.

25 Spectacular Movies You (Probably) Haven’t Seen Pt. 3 Mr. Nobody Who would you have been when, at crucial moments in your life, you chose to walk a different path? That thought experiment is explored brilliantly by this amazing science-fiction movie as we follow Nemo(s) for 118 years. Set in the past, the now and in the future, we follow different branches of his life through time, covering the topics of technology, love, human fragility and how decisions shape who we will end up being. Yo, También You haven’t seen a romance story like this before, and you don’t have to like them to fall deeply in love with this one. A Scanner Darkly Based on the book by Philip K. They Live This 1988 Hollywood movie is counter-culture classic. Un prophète (A Prophet) Gritty, raw, dark. Spring, Summer, Fall, Winter… and Spring This is perhaps my favorite movie of all time. The Act of Killing This is a deeply disturbing movie that has to be seen by everyone. A Single Man You can watch this movie just for the cinematic beauty alone. The Edukators Her Die Welle Gattaca

25 Spectacular Movies You (Probably) Haven’t Seen Pt. 2 Human Traffic Very unique comedy about the drug/club culture in the UK. Five friends ponder society, drug use and their own lives as they go about their usual weekend of snorting, smoking, popping, dancing and sex. The Matador Pierce Brosnan plays an assassin going through a mid-life crisis as he approached retirement. The Good, The Bad, And the Weird Two comical outlaws and a bounty hunter fight for a treasure map in 1940s Manchuria while being pursued by the Japanese army and Chinese bandits. Tucker and Dale vs. A group of college students go camping for the weekend and, through a series of unlucky events, begin thinking that the harmless Tucker & Dale (pictured above) are trying to kill them. New Kids Turbo An absolutely nutty movie from the Netherlands. Kiss, Kiss, Bang, Bang KKBB is a murder-comedy (?) Big Trouble Big Trouble is one of those movies where all of these different people end up intertwined at the end of the movie. Once Upon A Time In The West Persepolis 13 Assassins Dr. Drive

25 Spectacular Movies You (Probably) Haven’t Seen Midnight in Paris Woody Allen’s latest places starving writer Owen Wilson in Paris with his fiancée, Rachel McAdams. Searching for inspiration for his incomplete novel, Owen begins taking strolls around the city at night where he discovers an unexpected group of people. I wish I could be more specific, but it would ruin the surprise. Know that it is brilliant, witty and full of mystique. 92% on Rotten Tomatoes (RT). Let the Right One In The best vampire movie ever made in my opinion. Watch Let the Right One In for FREE on Amazon Instant Video The Man From Earth Holy &#%@ this film’s plot is fascinating! Garden State This is my absolute favorite film. Waking Life It’s impossible for you to grasp Waking Life without actually watching it, but I’ll do my best to explain it. Watch Waking Life for FREE on Amazon Instant Video Closer This film is a rather dark, yet comedic story about the twisted relationships between Natalie Portman, Jude Law, Clive Owen and Julia Roberts. Sin Nombre Snatch The Descent

The 30 Best Films of the Decade - Page 2 of 3 20. Super Troopers Say what you’d like about the movies they’ve made since, but don’t spread ill-will toward Broken Lizard’s breakout hit. The first ten minutes of this film might be some of the best scripted comedy in history, let alone the decade. This is one of two most-quotable films on our list, one that forever popularized the mustache ride. It has just as much wackiness as it does earnest human moments, which makes all the difference. 19. The poem and namesake for the film is about a young man leaving his love behind to face the tumult of rebellion and dirt and death. 18. One of a few directorial debuts that made our list, Brick was crafted by Rian Johnson on a shoestring budget with a little-known actor named Joseph Gordon-Levitt leading this tale of high school corruption. 17. It’s hard to make a list of the decade’s best and not include the work of Martin Scorsese, who finally broke into Oscar gold with this 2006 release. 16. What effing Ian Guy? 15. 14. 13. 12. 11.

movies you should watch before you die - a list by Chris1660 Cult Movies - Top 10 List - Top Ten List Top 10 Films About Nonconformists "This is a world where everybody's gotta do something. Ya know, somebody laid down this rule that everybody's gotta do something, they gotta be something. "If we admit that human life can be ruled by reason, then all possibility of life is destroyed." "Words offer the means to meaning, and for those who will listen, the enunciation of truth. "They're not that different from you, are they? "My life, I mean . . . "Man, I see in fight club the strongest and smartest men who've ever lived. "I mean, it's real hard to be free when you are bought and sold in the marketplace. "Vice, Virtue. "Anybody here? "And now they're telling me I'm crazy over here because I don't sit there like a goddamn vegetable. Forgotten Movie Classics © 2015 Shelf-Life Productions LLC