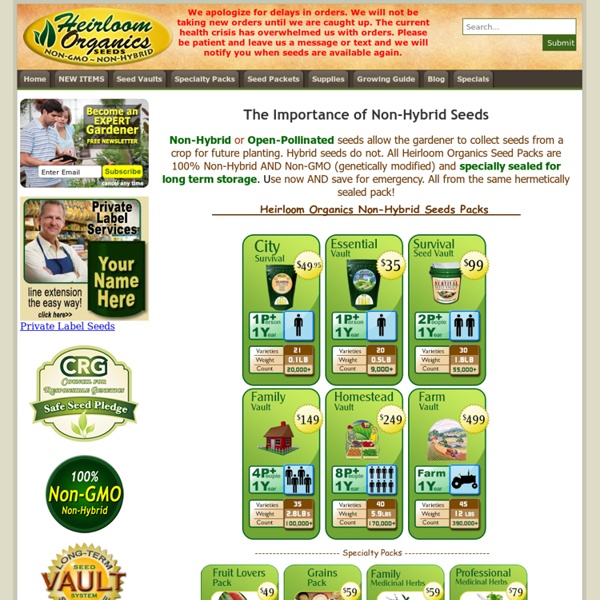 The Four Steps Required to Keep Monsanto OUT of Your Garden Seed catalogs for the 2014 growing season are arriving in mailboxes across the Northern Hemisphere with home gardeners everywhere starting to plan which seeds they will sow in their spring gardens. A positive trend in recent years is the growing number of gardening enthusiasts choosing to plant gardens using organic and/or heirloom seeds. What most of these home gardeners don’t realize is that corporate behemoth and GMO titan Monsanto has been gobbling up the seed market faster than a caterpillar can munch a tomato plant! With one fell swoop in 2005, Monsanto grabbed approximately 40% of the US vegetable seed market with its acquisition of Seminis. This means that a home gardener could unknowingly be supporting the development and proliferation of genetically modified crops if the seeds used are from Seminis. Does this mean that even if you buy organic or heirloom seeds from a completely independent company some of your purchase might be supporting the bad guys? Yes, it does. Surprise!

Veseys Sources for Buying Non-GMO Seeds One of the questions that I often get and have had myself for a while is where can you buy non-gmo seeds or seeds from companies that aren’t owned by Monsanto. Monsanto owns something like 90-95% of the seed companies out there. So the company might not be selling genetically engineered seeds, the money is still going into the pockets of Monsanto. I’m not down with that. Here are some seed companies that I’ve either worked with or have been highly recommended by others. SeedsNow.com A family owned operation right outside of Los Angeles, provides 100% non-gmo, open-pollinated and non-hybrid seeds. At SeedsNow.com, we are on a mission to help families and communities understand the importance of growing their own Organic/NON-GMO food – wherever they might live. UOG fans get 10% off their SeedsNow.com order just by using the code: URBAN10. Botanical Interests I also contacted, Botanical Interests to find out where they source their seeds from and their stance on genetically engineered seeds.

Native Seeds/SEARCH Owning It. Peddling a product that consumers can duplicate for free is a tricky business. With affordable consumer technology, you can now copy a song a hundred times, with no degradation in the sound quality—and most people seem to immediately recognize why that’s gonna make it harder to get paid for songs. But my first experiences with lossless, duplicable technology didn’t have anything to do with my career as a rapper. Seeds, quite obviously, are the mechanism of plant duplication. So if farmers can just save seeds from previous crops, why would they still buy them from seed companies? Monsanto is probably a familiar name to most readers. A lot of people are concerned about Monsanto. At these summer events, gardeners and naturalists traded heirloom seeds, which is perfectly legal because there’s no patent to infringe upon—it’s just a tomato. Monsanto seeds, as I mentioned, you’re not allowed to save. Both companies are employing similar strategies to respond to the challenge.

Family Farmers Seed Cooperative Why it Matters to Buy Heirloom Plants and Seeds The loss of genetic seed diversity facing us today may lead to a catastrophe far beyond our imagining. The Irish potato famine, which led to the death or displacement of two and a half million people in the 1840s, is an example of what can happen when farmers rely on only a few plant species as crop cornerstones. One blight wiped out the single potato type that came from deep in the Andes mountains; it did not have the necessary resistance. If the Irish had planted different varieties of potatoes, one type would have most likely resisted the blight. We can help save heirloom seeds by learning how to buy and save these genetically diverse jewels ourselves. ABOUT SEEDS One kind of seed, called First generation hybrids (F1 hybrids), have been hand-pollinated, and are patented, often sterile, genetically identical within food types, and sold from multinational seed companies. A second kind of seeds are genetically engineered. The Mayan word “gene” means “spiral of life.” Native seeds/SEARCH

Annie's Heirloom Seeds The Art of Saving Heirloom Vegetable Seeds - Grow It! “At the time, I assumed everyone had grandparents who hoarded rare seeds, enjoyed food they grew themselves and dabbled in the kind of connoisseurship that comes from eating only what is fresh and local (especially your own). I was soon to learn that this was not the case and that what we had found in the freezer was a major collection of very rare seeds, very rare indeed.” This quote from William Woys Weaver’s Harvesting Our Heirloom History pinpoints the moment when heirloom seed preservation became his lifework. Weaver describes heirloom seed saving as the link to a rich horticultural and culinary heritage. In his book, Heirloom Vegetable Gardening: A Master Gardener’s Guide to Planting, Seed Saving and Cultural History, he takes readers through the seed saving mastery of indigenous peoples and the waves of immigrant farmers and homesteaders who followed. Weaver’s book profiles 280 heirloom varieties, with authoritative growing advice and incredible recipes.