Lost Crops of the Incas: Little-Known Plants of the Andes with Promise for Worldwide Cultivation. About 3,000 years ago, an ingenious form of agriculture was devised on the high plains of the Peruvian Andes. 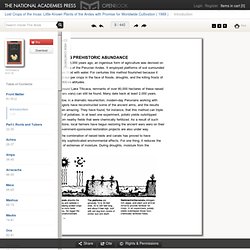 It employed platforms of soil surrounded by ditches filled with water. For centuries this method flourished because it produced bumper crops in the face of floods, droughts, and the killing frosts of those 3,800-m altitudes. Around Lake Titicaca, remnants of over 80,000 hectares of these raised fields (waru waru) can still be found. Many date back at least 2,000 years. Now, in a dramatic resurrection, modern-day Peruvians working with archeologists have reconstructed some of the ancient arms, and the results have been amazing. The combination of raised beds and canals has proved to have remarkably sophisticated environmental effects.

. ~ enlarge ~ "WARU WARU" - The ancient andean technology against climate change. Posted on Jan, 2 2013 @ 02:25 AM reply to post by Trueman I doubt that many regions in the world need to deal with the climate of the Andorian highs, the need of precise humidity (or lack of it) and the sun exposure. 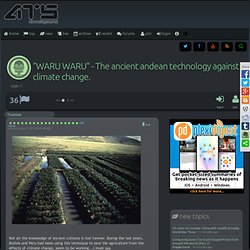 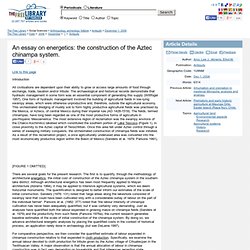 </a> Introduction All civilisations are dependent upon their ability to grow or access large amounts of food through exchange, trade, taxation and/or tribute. The archaeological and historical records demonstrate that hydraulic management in some form was an essential component of generating this supply (Wittfogel 1957). One form of hydraulic management involved the building of agricultural fields in low-lying swampy areas, which were otherwise unproductive and, therefore, outside the agricultural economy. There are several goals for the present research. 2. Environmental background to chinampa construction.

Bashapedia / Chinampa. Are you ready to learn about an ancient mesoamerican agriculture technique?!?!?! 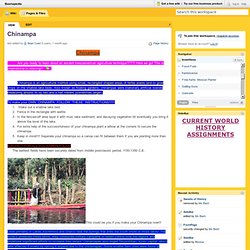 Here we go! This is inspirational to learning!!!. Chinampa is an agricultural method using small, rectangled shaped areas of fertile arable land to grow crops on the shallow lake beds. Also known as floating gardens, chinampas were stationary artificial islands measuring around 30 by two and a half meters (sometimes larger). To make your OWN CHINAMPA FOLLOW THESE INSTRUCTIONS!!!!!! Www.iuss.org/19th WCSS/Symposium/pdf/1302.pdf. The Domesticated Landscapes of Los Llanos de Moxos, Bolivia « * Note: Following are some sections I’ve extracted from a research paper I wrote some years ago. 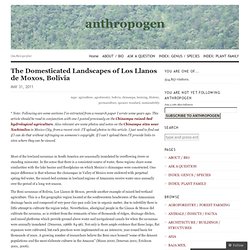 This article should be read in conjunction with one I posted previously on the Chinampa raised-bed hydrological agriculture. Also relevant are some photos and notes on the Chinampa sites near Xochimilco in Mexico City, from a recent visit. I’ll upload photos to this article. I just need to find out if I can do that without infringing on someone’s copyright. If I can’t upload them I’ll provide links to sites where they can be viewed. Chinampas. What is Raised Field Agriculture? - A Lesson in Applied Archaeology, Part 1. A Lesson in Applied Archaeology Table of ContentsWhat are raised fields? 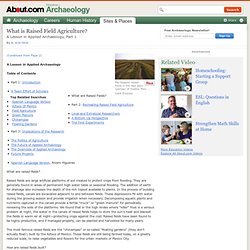 Raised fields are large artificial platforms of soil created to protect crops from flooding. They are generally found in areas of permanent high water table or seasonal flooding. Chinampa. Modern chinampas Description[edit] Sometimes referred to as "floating gardens," chinampas were artificial islands that usually measured roughly 98 ft × 8.2 ft (29.9 m × 2.5 m).[1] Chinampas were used by the Aztec Indians.[2] In Tenochtitlan, the chinampas ranged from 300 ft × 15 ft (91.4 m × 4.6 m)[1] to 300 ft × 30 ft (91.4 m × 9.1 m)[1][3] They were created by staking out the shallow lake bed and then fencing in the rectangle with wattle. 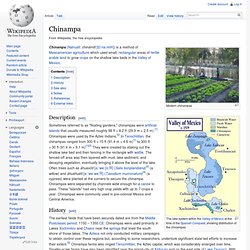 The fenced-off area was then layered with mud, lake sediment, and decaying vegetation, eventually bringing it above the level of the lake. Often trees such as āhuexōtl [aːˈweːʃoːt͡ɬ] (Salix bonplandiana)[2] (a willow) and āhuēhuētl [aːˈweːweːt͡ɬ] (Taxodium mucronatum)[4] (a cypress) were planted at the corners to secure the chinampa. Chinampas were separated by channels wide enough for a canoe to pass. History[edit] Build your own Chinampa. ***z-google-468x60-banner.html*** A Chinampa is basically a floating farm. It is a dirt/hydroponics hybrid system placed on a floating raft originally built by the ancient Aztecs. These were rafts made of rushes and reeds lashed together and topped with nutrient rich soil from the bottom of Lake Tenochtitlan.

Crops were planted in the soil on the raft and roots extended down into the lake. I have read arguments that this is not hydroponics because it involves dirt - well, it does and it doesn't. Build an Aztec Water Garden. Investigating Chinampa Farming. Chinampas of Tenochtitlan « Sprouts in the Sidewalk. Mexico City, a thriving metropolis of 20 million, is built on and around the ancient Aztec city of Tenochtitlan. 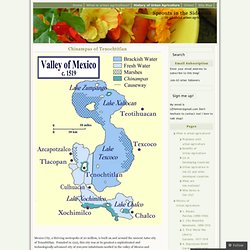 Founded in 1325, this city was at its greatest a sophisticated and technologically-advanced city of 200,000 inhabitants nestled in the valley of Mexico and surrounded by a series of connected lakes. (3) The market district, Tlatelolco, was estimated by Spanish explorer Bernal Diaz del Castillo to be twice the size of Seville and bustling with over 60,000 shoppers and traders. (4) The produce and goods for this market and several others in the city came mostly from the intricate and efficiently irrigated gardens created by the Aztecs in the shallow lakes surrounding the city. These gardens, called chinampas , were artificial island plots of 30 x 2.5-3 meters. Chinampa (Mexican agriculture. The Chinampas of Mexico. Aztec Farming. Chinampa: Raised-bed hydrological agriculture « Note: Following is a paper I wrote years ago (2006), when I first became interested in the history, evolution, and eventual Spanish-inflicted decline of Aztec Chinampa agriculture. 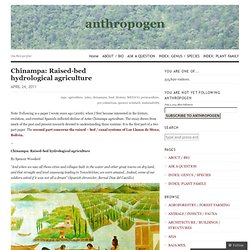