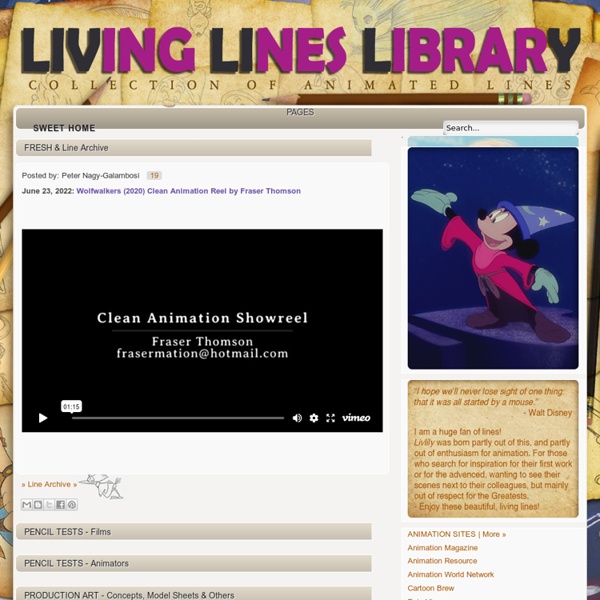 Top 100 Animation Blogs and Websites Every Animator Must Follow 1. Animation World Network | Celebrating the Art, Craft and Business of Animation Hollywood, CA About Blog The Animation World Network is the largest animation-related publishing group on the Internet, providing readers from over 151 countries with a wide range of interesting, relevant and helpful information pertaining to all aspects of animation.Frequency about 14 posts per week. Blog awn.com Facebook fans 108,590. Twitter followers 37,391.

How to Train an Animator, by Walt Disney It's difficult to overstate the importance of the following eight-page memo. Written by Walt Disney in December of 1935 to Don Graham — a highly respected art teacher from Chounaird Art Institute tasked with helming art classes for Disney animators — this missive signalled the birth of a structured training program that would subsequently enable Walt's studio to produce hit-after-hit during the Golden Age of Animation. For aspiring animators, this is absolutely essential reading; for everyone else, assuming you have even the slightest interest in the development of one of the world's most influential entertainment companies, this is simply an engrossing, inspiring read. Transcript follows.

Design If you are looking for design examples, practical tips from professional designers, and revealed secrets on website design, graphical design, or publishing design – you are at the right place. Here, at Cruzine, we are regularly exposing information on design in all its forms and shapes. Photoshop tutorials and examples, vector graphics, typography in web design and print – these are only some highlights from our design category. Popular tags:art, artworks, artwork, illustrations, illustration Illustrations by Typography by Teagan White

Animation with a moustache Posted on March 17, 2014 | Leave a CommentFiled under Animation Having moved back to London to work on a really cool cartoony game I can’t talk much of for now, I am currently focusing on life drawing and painting most of my evenings. London is probably the only place in the world where Life drawing classes happen pretty much every day.

Tim's Animation Mentor Blog Yellowbird, the first independent feature film created by French studio TeamTo debuted at the London International Film Festival late last year. The film and was directed by Christian De Vita (lead storyboard artist on Fantastic Mr Fox), designed by Benjamin Renner (co-director of Ernest and Celestine) and voiced by stars including Seth Green, Dakota Fanning and Danny Glover. I had the opportunity to see the film and also interview TeamTo founder Guillaume Hellouin and director Christian De Vita at their Paris studio. We talked about the process of creating an independent feature, changes in the industry and their advice for those early in their careers. Research « The DIEM Project We are investigating what drives human attention and eye-movements when observing moving images. Our goal is to develop a comprehensive theory of active visual perception and cognition. Questions which motivate this research include: * How do we look at film, television, on-line video or real-life events? * How does looking influence what we see, remember and feel? The Technology

Karen J Lloyd's Storyboard Blog And we’re back! Here’s Part 2 of the interview I did with Pixar Story Artist Matthew Luhn. You can find Part 1 of Matthew’s interview here. Enjoy. So I animated a couple of the army men shots on Toy Story and it was very difficult. But the great thing about the experience was that in the room right next door was the story department. Art, Animation & Film Analysis by James Chiang The danger and complexity of Wile E. Coyote’s plans (and his use of ACME products) were a sure sign of imminent failure. Images courtesy of Warner Bros. “The more simply you see, the more simply you will render. People see too much, scatteringly.” — Robert Henri Less isn’t more, but it can be more effective.