"laser cutter" 3D Models to Print - yeggi - page 5. DIY Projects, Communities and Cultures. We adopt the Wikipedia definition of DIY (Do It Yourself) as any creation, modification or repair of objects without the aid of paid professionals. 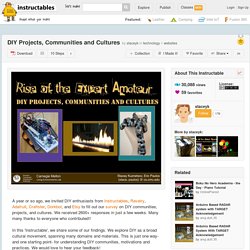 DIY practices predate recorded history as human survival often relied on the ability to repair and repurpose tools and materials. Over the past few decades, new materials and sharing mechanisms have led to a wider adoption of DIY culture. One of the earliest “modern era” DIY communities formed among amateur radio hobbyists in the 1920’s. Ham radio communication continued even during World War II, when a ban was placed on amateur radio communication. Starting in the 1970's, enthusiasts created 'zines' to express the punk aesthetic. Thousands of DIY communities exist today, varying in size, organization and project structure. We focus on a subset of these as a sample of the diverse materials, practices and sharing mechanisms among DIY practitioners. Previous Speakers » TEDx Midwest - Riveting Talks by Remarkable People. TEDxMidwest speakers are highly accomplished with remarkable ideas, insights and stories. 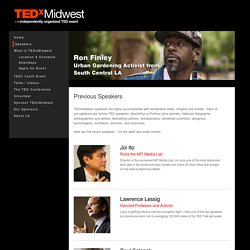 Most of our speakers are former TED speakers, MacArthur or Pulitzer prize winners, National Geographic photographers and writers, bestselling authors, entrepreneurs, renowned scientists, designers, technologists, architects, activists, and musicians. Here are the recent speakers – for the adult and youth events. Joi Ito Runs the MIT Media Lab Director of the renowned MIT Media Lab, Joi runs one of the most advanced tech labs in the world and was named one of the 25 most influential people on the web by Business Week. Lawrence Lessig Harvard Professor and Activist Larry is getting citizens into the corruption fight – Also one of the top speakers at a previous event. Ron Finley Guerilla Gardener from South Central LA - TED 2013 Speaker Ron’s vision for a healthy, accessible “food forest” started with the curbside veggie garden he planted in the strip of dirt in front of his own house. Julia Sweeney Jenn Lim.

Chapter 2. Other Models for Promoting Community Health and Development. What is Healthy Cities/Healthy Communities? 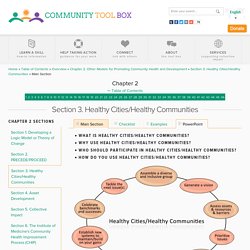 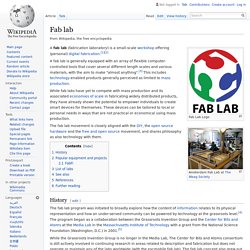 While fab labs have yet to compete with mass production and its associated economies of scale in fabricating widely distributed products, they have already shown the potential to empower individuals to create smart devices for themselves. These devices can be tailored to local or personal needs in ways that are not practical or economical using mass production. The fab lab movement is closely aligned with the DIY, the open source hardware and the free and open source movement, and shares philosophy as also technology with them. History[edit] Popular equipment and projects[edit] FabFi[edit] 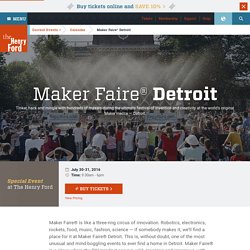 Tickets to Maker Faire event are additional cost, and can be purchased at The Henry Ford on the day of the event. Parking at The Henry Ford For the sixth annual event, The Henry Ford has moved the Faire’s outdoor midway from the Henry Ford Museum parking lot to the Lovett Hall lot behind the museum. Henry Ford Museum – the Main Museum lot will be open to guests with expanded parking for physically challenged guests just outside the Giant Screen Experience entrance. Greenfield Village Lots - Parking in the Village Road lots across from Greenfield Village is available during the weekend. Oakwood Blvd Lots – Parking is available directly across from and next to Maker Faire® on Oakwood Blvd in the Ford Motor Company lots.