Get Yo' Nails Did 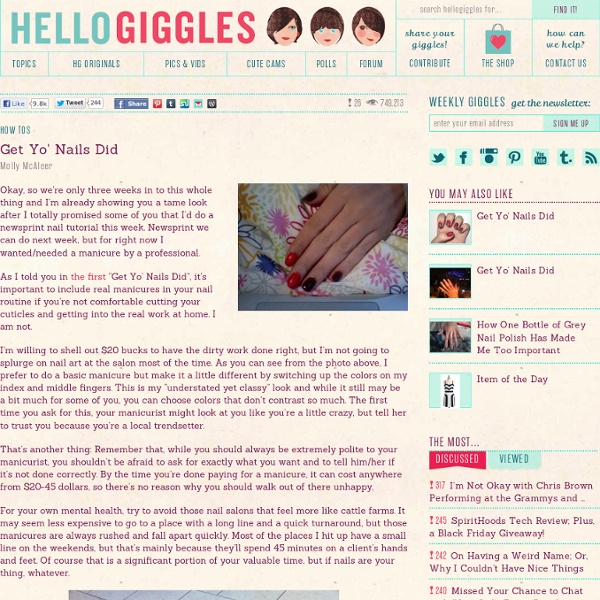 Okay, so we’re only three weeks in to this whole thing and I’m already showing you a tame look after I totally promised some of you that I’d do a newsprint nail tutorial this week. Newsprint we can do next week, but for right now I wanted/needed a manicure by a professional. As I told you in the first “Get Yo’ Nails Did”, it’s important to include real manicures in your nail routine if you’re not comfortable cutting your cuticles and getting into the real work at home. I am not. I’m willing to shell out $20 bucks to have the dirty work done right, but I’m not going to splurge on nail art at the salon most of the time. As you can see from the photo above, I prefer to do a basic manicure but make it a little different by switching up the colors on my index and middle fingers. That’s another thing: Remember that, while you should always be extremely polite to your manicurist, you shouldn’t be afraid to ask for exactly what you want and to tell him/her if it’s not done correctly.

Anonymous Confessions As they say, what happens in Vegas stays in Vegas – but what if we could share with full discretion? Everyone of us has his own little secrets and ‘Confessions’, a public art project by american artist Candy Chang, invites people to anonymously share their confessions and see the confessions of people around them in the heart of the Las Vegas strip. Chang lived in Las Vegas for a month and turned her P3 Studio gallery into a contemplative place for people to share their confessions and being fascinated by the secrets others hide inside themselves. Inspired by Post Secret, Shinto shrine prayer walls, and Catholicism, people could write and submit their confessions on wooden plaques in the privacy of confession booths.

15 Amazing Animated Short films We all love short animated films, but creating short film is very hard task. Putting whole story in 5 to 10 minutes is not easy. Can you imagine? Few films produced after working hard more than 6 years! Here we collected 15 dazzling animated short films for your inspiration. You can find different genres in these movies like heart-touching film One life, frightening film The Passenger.

Honey, My New DIY Face Wash Posted by Alexandra on Wednesday, September 1, 2010 · 80 Comments I haven’t exactly hidden my love of honey—I pretty much mention its antibacterial wound-healing powers every chance I get. But, truth is, I only got turned onto its magic in earnest a few months ago… See, back in May the lovely Simone invited me to join her at a natural beauty house party—yes, this is how we roll in Los Angeles—where guest speaker Dae Williams sat at the center of our cross-legged lady circle, expounded on the many benefits of natural ingredients, made us laugh, and made us blush. For real. Dae is what you’d call a character, and she takes her act on the road, peddling her lovely clean products and educating women about their bodies.

7 Basic Things You Wont Believe Youre All Doing Wrong If you're like us, you might sometimes have a problem with complex tasks, like trying to drive an ambulance and send a text message at the same time. But hey, at least most of us have figured out the simplest things that get us through the day, right? Except, you know, some of the simple things we've done every day of our lives, like ... What could be simpler than taking a good crap? Even babies are good at it. You might be surprised, then, to find out that even those of us who can burp without throwing up get this wrong every single day.

Plato's "The Allegory of the Cave" "In fact, you get pretty good at understanding how the patterns in the show work, and everyone else chained up is like, 'Holy shit bro, how did you know that that tree was going to fall on that guy?' and you're like, 'It's because I fucking pay attention and I'm smart as shit.' You're the smartest of the chained, and they all revere you." Glaucon: "But Socrates, a tree didn't really hit a guy. Water Marble Tutorial. Supplies: orange stick or... Water Marble Tutorial. Supplies: orange stick or toothpick, shot glass or cup (the smaller the circumference, the less polish you end up wasting), room temp. water, nail polish, tape (optional, but it helps with the clean up) I like to begin by prepping my nails with base coat and one coat of polish. Here I used China Glaze Innocence for a nice neutral base. Steps: 1.

How To Style Maiden Braids Last month I did a makeover story with Kelsie and had many requests for a maiden braid tutorial. Yesterday she came in and we photographed these simple step by steps. Kelsie has extremely long and thick hair, but anyone with shoulder length or longer can do these braids (see my photo below for an example).

Funny Anti Jokes What are Antijokes? Anti Jokes (or Anti Humor) is a type of comedy in which the uses is set up to expect a typical joke setup however the joke ends with such anticlimax that it becomes funny in its own right. The lack of punchline is the punchline.