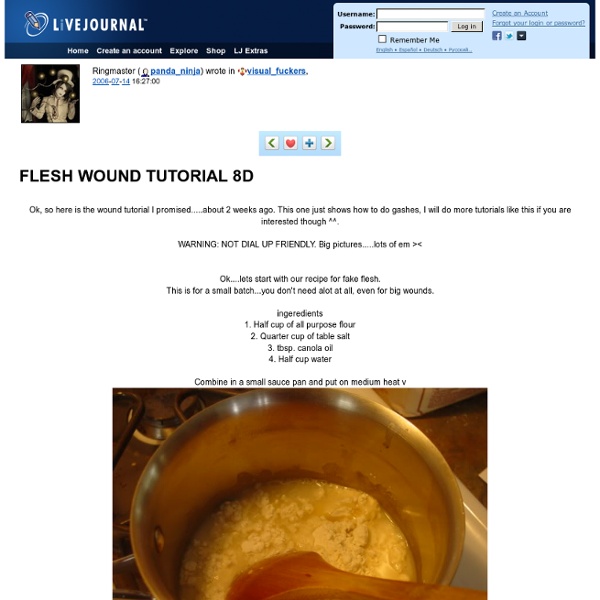 Ok, so here is the wound tutorial I promised.....about 2 weeks ago. This one just shows how to do gashes, I will do more tutorials like this if you are interested though ^^. WARNING: NOT DIAL UP FRIENDLY. Big pictures.....lots of em >< Ok....lets start with our recipe for fake flesh.This is for a small batch...you don't need alot at all, even for big wounds. ingeredients1. Combine in a small sauce pan and put on medium heat v Keep stirring until all the ingredients form into a ball v The consitancy should be something like play doh...but more rubbery. NEXT : fake blood ingredients1. 1 tbsp. all purpose flour2. 3/4 cup water3. Ok, this part is importantBefore cooking, combine the water and flour to form a slurry. Then add them to a small sauce pan and bring to a boil, let simmer for a minute or so (do not add the food coloring yet). This will make the 'blood' thick. Now that that is all done...let's move on to assembling the wound 8D Aside from the things we just made, this is what you will need.

7 things you can make, not buy: Cosmetics Interested in uplifting stories on the natural world, sustainable communities, simple food, and new thinking on how to live well? Please enter a valid email address and try again! No thanks List of unusual deaths - Wikipedia, the free encyclopedia - StumbleUpon This is a list of unusual deaths. This list includes unique or extremely rare circumstances of death recorded throughout history, noted as being unusual by multiple sources. Some of the deaths are mythological or are considered to be unsubstantiated by contemporary researchers. Oxford Dictionaries defines the word "unusual" as "not habitually or commonly occurring or done" and "remarkable or interesting because different from or better than others."[1] Some other articles also cover deaths that might be considered unusual or ironic, including List of entertainers who died during a performance, List of inventors killed by their own inventions, List of association footballers who died while playing, List of professional cyclists who died during a race and the List of political self-immolations. Antiquity[edit] Middle Ages[edit] Renaissance[edit] 18th century[edit] 19th century[edit] 20th century[edit] 1920s[edit] 1950s[edit] 1960s[edit] 1961: U.S. 1970s[edit] 1980s[edit] 1990s[edit]

Snow-Globe Soap Dec19 by Brenda Ponnay Stuff their stockings with something they can wash their hands with!By Brenda Ponnay What’s cuter than a button, small enough to fit in a stocking, won’t rot your teeth and leaves you squeaky clean? A mini snow-globe soap, of course! This is technically just “melt and pour” soap so it might be considered cheating to some hard-core soap enthusiasts but I’m not about to mess with lye or distilling vodka when I’ve got a small child acting as my personal assistant. First you’ll cut up the glycerine into 1-inch chunks. Don’t be fooled by the picture above. After you’ve poured the glycerine, let it cool just enough to form a thin skin on the top. After all your toys are arranged, you can add your snow. Next you’ll pop it in the freezer for about twenty minutes or until the cubes are cool to touch from the underside of the ice cube tray (be sure to check the middle). If you found us through Stumble Upon!

Expectations vs. Reality (16 Pics) | Things don’t always go as planned. Check out the pics below to see a few examples of what happens when our expectations get punched in the face by reality. via via Tickling Expectations: Reality: via via via via via You may also like: Lemon Sugar Scrub Lemon is invigorating any time of year, but something about winter makes me crave that freshness of citrus. This lemon sugar scrub is a great gift and a fun project to make with girlfriends. You can use it as exfoliating body wash, hand scrub or even counter cleaning if you omit the oil… 2 lemons 1 cup of sugar A small jar 2 T cooking oil 2 T of Liquid soap (unscented) Squeeze the lemons into a small bowl. Next add the oil and the liquid soap Mix them all together until it looks creamy Start adding sugar a spoonful at a time and mixing it in Keep adding until it gets really thick and hard to stir. I decorated my jar with Japanese masking tape I made a label with my mini stamp kit Twist the lid back on and you're ready to gift this great winter lemon sugar scrub!

Shoe Lacing Methods Mathematics tells us that there are more than 2 Trillion ways of feeding a lace through the six pairs of eyelets on an average shoe. This section presents a fairly extensive selection of 50 shoe lacing tutorials. They include traditional and alternative lacing methods that are either widely used, have a particular feature or benefit, or that I just like the look of. 50 Different Ways To Lace Shoes Criss Cross Lacing This is probably the most common method of lacing normal shoes & boots. Over Under Lacing This method reduces friction, making the lacing easier to tighten and loosen plus reducing wear and tear. Gap Lacing This simple variation of Criss Cross Lacing skips a crossover to create a gap in the middle of the lacing, either to bypass a sensitive area on the instep or to increase ankle flexibility. Straight European Lacing This traditional method of Straight Lacing appears to be more common in Europe. Straight Bar Lacing Hiking / Biking Lacing Quick Tight Lacing Ukrainian Lacing- New!

Sugar Lip Scrub *with tutorial* - BATH AND BEAUTY Alright, so I wasn't all that interested in lip scrubs until I had a conversation with my sister. As usual, we were discussing Lush products (we both used to work there at different stores in different cities!) and the topic of lip scrubs came up. They sell these: I wouldn't pay $9 for them, but I'm cheap like that. But after talking about it with my sister so much, I thought I'd give it a try. If you want to try your hand at it, here's what I did: Ingredients:white sugarhoneyapricot kernel oilpure vanilla extractpeppermint essential oil You could always make substitutions, this is just what I did. Alright, now here are my extremely precise measurements and directions (har har har): 1. 2. 3. 4. 5. To use:Wet lips with water and rub a pea sized amount on lip. I like to finish up with my Rocky Mountain Soap Company peppermint lip butter! And because I know you're probably curious, it didn't taste half bad either!!