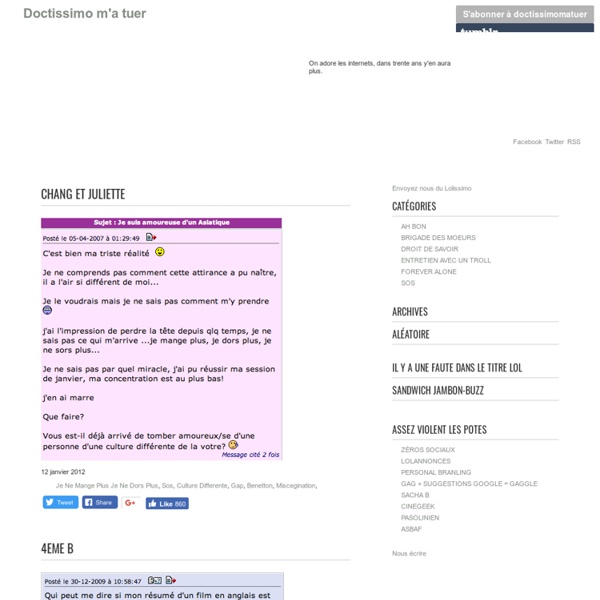 French Whoops! Maybe you were looking for France? France, scaled to actual size. French is a series of incomprehensible garglings, and throat utterances belched out by the French, and those nations who have been invaded by them in the past (a sand dune in the Sahara populated by an ant colony and some inconsequential rice farmers in Vietnam). Despite French sounding similar to a throat disease it is the international language of surrender, and therefore love. Apartamento - an everyday life interiors magazine Featuring: Trix & Robert Haussmann, Omar Souleyman, Atsuki Kikuchi, Rose McGowan, Ken Done, Scott Ewalt, Sara Sachs & Frederik Jacobi, Scott Sternberg, Christoph Ruckhäberle, Chung Eun Mo, Aurélien Arbet & Jérémie Egry, Smiljan Radic, Piero Gandini, Jolanthe Kugler, Francesco Zanot, Genesis P-Orridge With Murray Moss’ collection of work by Enzo Mari and a comic by Andy Rementer and Margherita Urbani

Running a startup When I read over law paperwork, I’m like When someone asks what is our business model, I’m like When I don’t see anyone at an event I know, I’m like When I finally get user feedback that’s positive, I’m like When I google for a great idea I have and it already exists, I’m like Wébifiez-moi – November 15, 2011Posted in: Retired Two months ago Mozilla launched a campaign called Webify Me. The campaign was rooted in the idea that although there is one Web that we use, we all have different interactions with it, which makes the Web both unique and personal for each individual. Webify Me is a site that builds a fun, visual manifestation of the user’s personal Web. Users answered a series of fun questions on how they use the Web.

TEENAGE MUTANT NINJA NOSES - Page 1 of 18 The mission of this blog was always simple: shine a spotlight on God’s noses. Noses are an issue that affects 99% of us. And while I won’t say that the 1% without noses are categorically evil, they are. Batman Running Away From Shit Dear followers, You’re invited to follow my work and web comics on my brand new tumblr Hope to see you there, PS: You can still submit your “Batman Running Away From Shit” gifs by email to the following address : thatdesignbastard@gmail.com.

We Make It Good Petrina Hicks Posted on Wednesday, May 9th, 2012 by Shilo Barnaby Barford Posted on Monday, May 7th, 2012 by Shilo Michael Page Humour de recruteur 19th Mar 2013 Pierre Cannet - 7th Jui 2012 | 4 notes 7th Jui 2012 | 2 notes Mapping European Stereotypes By Maria Popova Geopolitical cartography is all about an objective view of the world’s political conventions. But there’s nothing politically correct in Bulgarian-born, London-based designer Yanko Tsvetkov‘s Mapping Stereotypes project — a series of amusing, often tragicomically true maps of Europe based on various subjective perceptions and ideologies. Clever and Cute Street Art (12 pieces) Banksy makes us think with his satirical street art. TED prize winner JR inspires us with his soulful portraits. But it's only OakoAk who can make us laugh with his cute and clever pieces. Lately, the French street artist has been on a tear, turning park benches, stoops and dilapidated walls into wonderful and unexpected places for art.

Blow Up the Web With 'Font Bomb' We’ve already showed you how to turn any webpage into a game of Asteroids; now you can add Font Bomb to the list of ways to destroy text of the web. Font Bomb is a fun little JavaScript bookmarklet you can use to plant bombs all around a webpage. Just drag the bookmarklet to your bookmarks bar and then head to a page you want to destroy. Click the bookmarklet and then start clicking anywhere on the page to plant bombs. Then, thanks to a little magic from CSS 2D Transforms, the text starts flying — perfect for a little Friday afternoon amusement.