Free Survival Books. Surviving Out There. This Girl Perfectly Explains Why Rape Has Become A Joke In India. She Literally Celebrated Rape Public Day With Her Sketch. Personal development. The Largest List of Text Message Shorthand (IM, SMS) and Internet Acronyms Found of the Web - kept current and up-to-date by NetLingo The Internet Dictionary: Online Dictionary of Computer and Internet Terms, Acronyms, Text Messaging, Smileys ;-) Seven body language tricks to make anyone instantly like you. There's no question that body language is important. 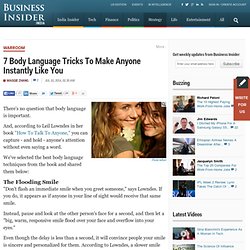 And, according to Leil Lowndes in her book "How To Talk To Anyone," you can capture - and hold - anyone's attention without even saying a word. We've selected the best body language techniques from the book and shared them below: The Flooding Smile "Don't flash an immediate smile when you greet someone," says Lowndes. If you do, it appears as if anyone in your line of sight would receive that same smile. Instead, pause and look at the other person's face for a second, and then let a "big, warm, responsive smile flood over your face and overflow into your eyes. " Even though the delay is less than a second, it will convince people your smile is sincere and personalized for them.

Sticky Eyes "Pretend your eyes are glued to your conversation partner's with sticky warm taffy," Lowndes advises. You can also try counting your conversation partner's blinks. Epoxy Eyes The Big-Baby Pivot. The Extreme Presentation(tm) Method. Adam Grant: How to Get the Attention of Busy People. Two years ago, I made a commitment to do something that made me profoundly uncomfortable. 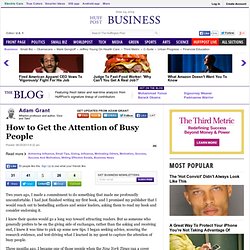 I had just finished writing my first book, and I promised my publisher that I would reach out to bestselling authors and senior leaders, asking them to read my book and consider endorsing it. I knew their quotes would go a long way toward attracting readers. But as someone who generally prefers to be on the giving side of exchanges, rather than the asking and receiving end, I knew it was time to pick up some new tips. I began seeking advice, scouring the research evidence, and test-driving what I learned in my quest to capture the attention of busy people. Three months ago, I became one of those people when the New York Times ran a cover story on my work, "Is giving the secret to getting ahead?

" 1. The 101 Most Useful Websites on the Internet. Here are the most useful websites on the Internet that will make you smarter, increase productivity and help you learn new skills. These incredibly useful websites solve at least one problem really well. And they all have cool URLs that are easy to memorize thus saving you a trip to Google. Also see: The Best Android Apps Also see: The Best Mac Apps and Utilities seatguru.com – consult this site before choosing a seat for your next flight.webmakerapp.com — an offline playground for building web projects in HTML, CSS and JavaScript. New age and occult. Fear of the Unknown. The Project Gutenberg EBook of Anna Karenina, by Leo Tolstoy. The Strange Case of Dr. Jekyll and Mr. Hyde, by Robert Louis Stevenson.

I heart intelligence Top 40 Useful Sites To Learn New Skills. You just have to know where to look. 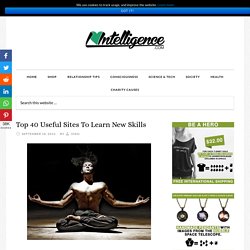 Sure, you can use Google, Yahoo, or Bing to search for sites where you can learn new skills. Literature. Factual. PearlTrees Info & Tools. Consciousness. Fresh Meat - 25 British TV Shows You Should Watch. Online SSB Training and Coaching Program in India. How To Get Ahead In Your Career. This Robotic Arm Can Do Many Things, But Is Unable To Think For Itself — a combinatorics problem by Calvin Lin. At a warehouse, robotic arms are responsible for retrieving boxes when an order is received from a customer. 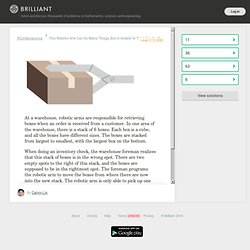 In one area of the warehouse, there is a stack of 6 boxes. Each box is a cube, and all the boxes have different sizes. The boxes are stacked from largest to smallest, with the largest box on the bottom. When doing an inventory check, the warehouse foreman realizes that this stack of boxes is in the wrong spot. There are two empty spots to the right of this stack, and the boxes are supposed to be in the rightmost spot. Tips and Techniques. Pineal Gland/Third Eye. Ebooks. Autopoiesis. BODY LANGUAGE. What 5 Things can You Do to Change the System? A few weeks ago a reader on this blog asked me an interesting question that I have been mulling over for some while: can I list 5 things everyone needs to do to change the system? 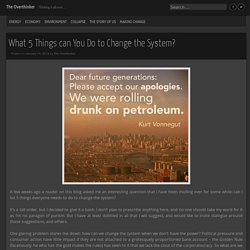 It’s a tall order, but I decided to give it a bash. I don’t plan to prescribe anything here, and no one should take my word for it as I’m no paragon of purism. But I have at least dabbled in all that I will suggest, and would like to invite dialogue around those suggestions, and others. One glaring problem stares me down: how can we change the system when we don’t have the power? Political pressure and consumer action have little impact if they are not attached to a grotesquely proportioned bank account – the Golden Rule (facetiously: he who has the gold makes the rules) has seen to it that we lack the clout of the corporatocracy.

Related:  The Largest List of Text Message Shorthand (IM, SMS) and Internet Acronyms Found of the Web - kept current and up-to-date by NetLingo The Internet Dictionary: Online Dictionary of Computer and Internet Terms, Acronyms, Text Messaging, Smileys ;-)   -  The 101 Most Useful Websites on the Internet   -  Education   -  Enterprise