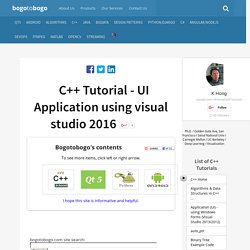 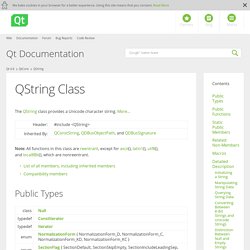 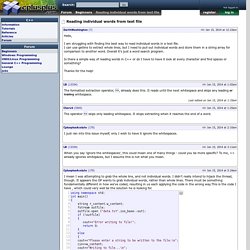 Upon modification, I realized that some values, despite being outputted, were not properly being stored. I changed the array output loop at the end to hoping to display each array position's string. Not only did some entries output to multiple lines, but some values such as the first zip code, were never stored. Data structures. Data structures data structure is a group of data elements grouped together under one name. 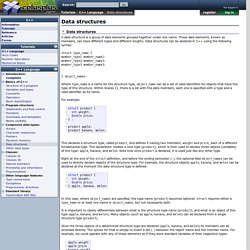 These data elements, known as members, can have different types and different lengths. Data structures can be declared in C++ using the following syntax: struct type_name { member_type1 member_name1; member_type2 member_name2; member_type3 member_name3; . . } object_names; Where type_name is a name for the structure type, object_name can be a set of valid identifiers for objects that have the type of this structure.

QFile Class. The QFile class provides an interface for reading from and writing to files. 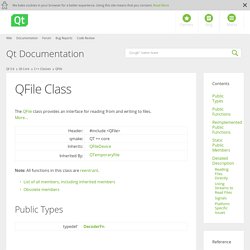 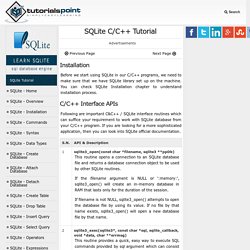 PROGRAMMING - NATIONAL CERTIFICATION IV - TESDA. VB or Qt Whats the difference? For the Aussies, VB is renowned as a type of fermented drink which people either love or hate. 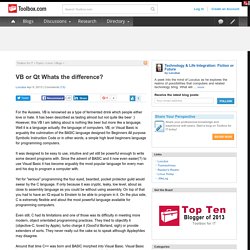 It has been described as tasting almost but not quite like beer :) However, this VB I am talking about is nothing like beer but more like a language. Well it is a language actually, the language of computers. VB, or Visual Basic is arguably the culmination of the BASIC language designed for Beginners All purpose Symbolic Instruction Code or in other words, a simple high level beginners language for programming computers. It was designed to be easy to use, intuitive and yet still be powerful enough to write some decent programs with. Since the advent of BASIC and it now even easier(?) Read word by word from file in C++ Why Do We Need size_t? In statically typed programming languages, datatypes play a very important role. 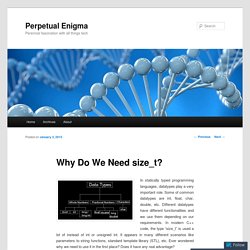 Some of common datatypes are int, float, char, double, etc. Facebook. C++ GUI with Qt Tutorial - Coding the FindCrap Program. Lesson 5: Inserting Into a Table. The insert statement is used to insert or add a row of data into the table. 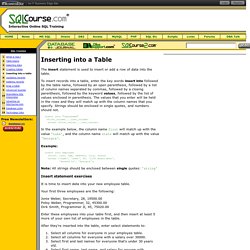 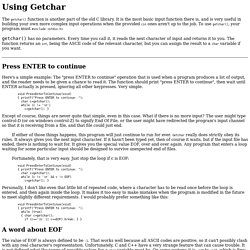 It is the most basic input function there is, and is very useful in building your own more complex input operations when the provided cin ones aren't up to the job. To use getchar(), your program must #include <stdio.h> getchar() has no parameters. Every time you call it, it reads the next character of input and returns it to you. The function returns an int, being the ASCII code of the relevant character, but you can assign the result to a char variable if you want.

Press ENTER to continue. GeekDad Wayback Machine: Radios That Work for Free. One year ago, you were reading this on GeekDad, by Kevin Kelly: Crystal Radios are an old standby of GeekDads. For the early mists of time GeekDads have been showing kids how to pull radio stations from thin air with the barest snips from the basement. Build Your Own Crystal Radio. Please ensure you have JavaScript enabled in your browser. If you leave JavaScript disabled, you will only access a portion of the content we are providing. The Most Effective Way to Learn Mandarin Tones - Tone Pairs - Google Hangout with Yangyang. How do I make an electromagnet? How do I make an electromagnet? It is fairly easy to build an electromagnet. All you need to do is wrap some insulated copper wire around an iron core. If you attach a battery to the wire, an electric current will begin to flow and the iron core will become magnetized. When the battery is disconnected, the iron core will lose its magnetism. Follow these steps if you would like to build the electromagnet described in our Magnets and Electromagnets experiment: Step 1 - Gather the Materials.

Drawn Animation Tutorial - How to do a Walk Action Cycle. TWO POINT PERSPECTIVE. One Point Perspective Drawing: The Ultimate Guide. This article contains everything an Art student needs to know about drawing in one point perspective. It includes step-by-step tutorials, lesson plans, handouts, videos and free downloadable worksheets. The material is suitable for middle and high school students, as well as any other person who wishes to learn how to draw using single point perspective. It is written for those with no prior experience with perspective, beginning with basic concepts, before working towards more complex three-dimensional forms.